The Hippolytus altarpiece and a number of other paintings from Holy Saviour Cathedral in Bruges were placed in the Groeninge Museum for conservation reasons in 1992. The left wing, with its portraits, clearly reveals the hand of the Ghent master Hugo van der Goes. It is impossible to say whether the painting was a collaborative effort or whether Van der Goes added the donors' portraits to an unfinished triptych.

The central panel shows the martyrdom of Saint Hippolytus. His pale, slender body contrasts with the brightly coloured knights, whose outlines stand out against the steeply rising ground. The rarefied, seemingly emotionless atmosphere imbues Bouts' often cruel scenes with an oppressive silence.

The coats of arms on the rear of the wings, which also feature grisailles of the respective patron saints, enable us to identify the donors as Hippolyte de Berthoz, Charles the Bold's treasurer, and his wife Elisabeth Hugheins. The painting must have been commissioned some time after 1468.

Two men died for the faith after harsh treatment and exhaustion in the mines of Sardinia. One had been pope for five years, the other an antipope for 18. They died reconciled.

Pontian. Pontian was a Roman who served as pope from 230 to 235. During his reign he held a synod which confirmed the excommunication of the great theologian Origen in Alexandria.

Pontian was banished to exile by the Roman emperor in 235, and resigned so that a successor could be elected in Rome. He was sent to the “unhealthy” island of Sardinia, where he died of harsh treatment in 235. With him was Hippolytus (see below) with whom he was reconciled. The bodies of both martyrs were brought back to Rome and buried with solemn rites as martyrs.

Hippolytus. As a presbyter in Rome, Hippolytus (the name means “a horse turned loose”) was at first “holier than the Church.” He censured the pope for not coming down hard enough on a certain heresy—calling him a tool in the hands of one Callistus, a deacon—and coming close to advocating the opposite heresy himself.

When Callistus was elected pope, Hippolytus accused him of being too lenient with penitents, and had himself elected antipope by a group of followers. He felt that the Church must be composed of pure souls uncompromisingly separated from the world, and evidently thought that his group fitted the description. He remained in schism through the reigns of three popes.

In 235 he was also banished to the island of Sardinia. Shortly before or after this event, he was reconciled to the Church, and died with Pope Pontian in exile.

Hippolytus was a rigorist, a vehement and intransigent man for whom even orthodox doctrine and practice were not purified enough. He is, nevertheless, the most important theologian and prolific religious writer before the age of Constantine.

His writings are the fullest source of our knowledge of the Roman liturgy and the structure of the Church in the second and third centuries. His works include many Scripture commentaries, polemics against heresies and a history of the world. A marble statue, dating from the third century, representing the saint sitting in a chair, was found in 1551.

On one side is inscribed his table for computing the date of Easter, on the other a list of how the system works out until the year 224. Pope John XXIII installed the statue in the Vatican library.

Hippolytus was a strong defender of orthodoxy, and admitted his excesses by his humble reconciliation. He was not a formal heretic, but an overzealous disciplinarian. What he could not learn in his prime as a reformer and purist, he learned in the pain and desolation of imprisonment. It was a fitting symbolic event that Pope Pontian shared his martyrdom.

Pope Fabian (236-50) had the remains of Pontian and Hippolytus brought to Rome at a later date and Pontian was buried on August 13 in the papal crypt of the Catacomb of Callistus. In 1909 the original epitaph was found in the crypt of St. Cecilia, near the papal crypt.

“Christ, like a skillful physician, understands the weakness of men. He loves to teach the ignorant and the erring he turns again to his own true way. He is easily found by those who live by faith; and to those of pure eye and holy heart, who desire to knock at the door, he opens immediately. He does not disdain the barbarian, nor does he set the eunuch aside as no man. He does not hate the female on account of the woman’s act of disobedience in the beginning, nor does he reject the male on account of the man’s transgression. But he seeks all, and desires to save all, wishing to make all the children of God, and calling all the saints unto one perfect man” (Hippolytus, Treatise on Christ and Antichrist).

[Thanks to www.americancatholic.org's Saint of the Day and Catholic Encyclopdia, 1913]

May the precious long-suffering of the just, O Lord, we pray, bring us a great increase of love for you, and always prompt in our hearts constancy in the holy faith. Through our Lord. 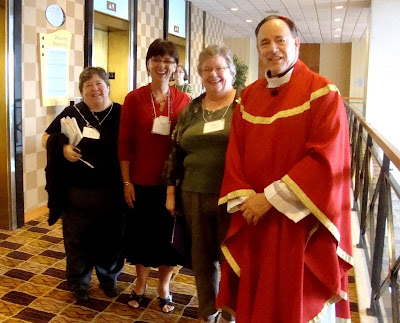 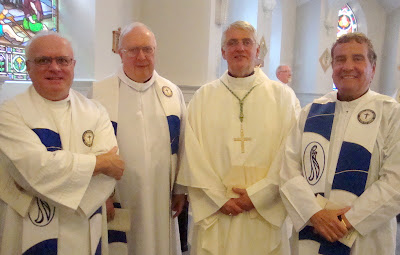 Concelebrants before Closing Liturgy at Notre Dame Cathedral on August 11 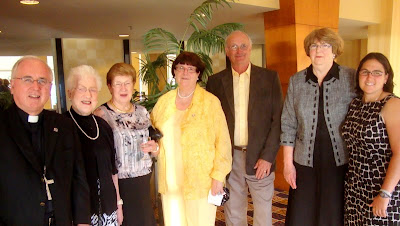 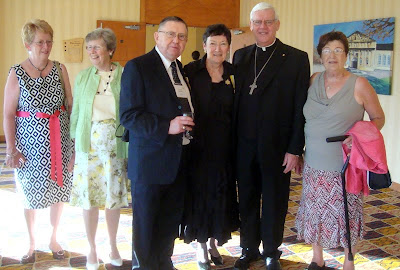 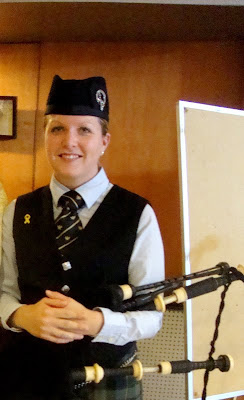 Piper Amanda gets ready to lead Guests of Honour to Dinner 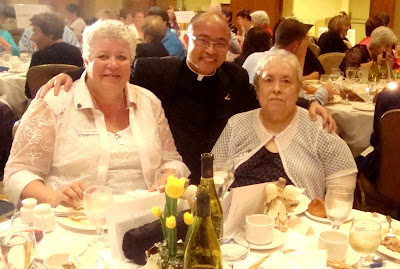 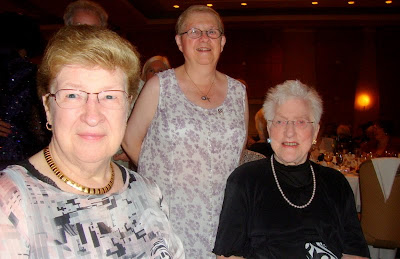 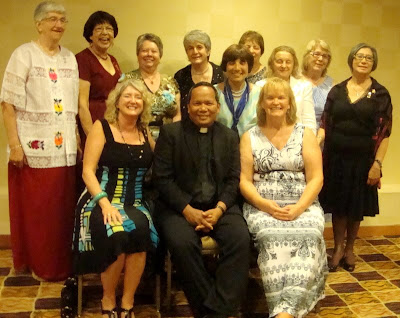 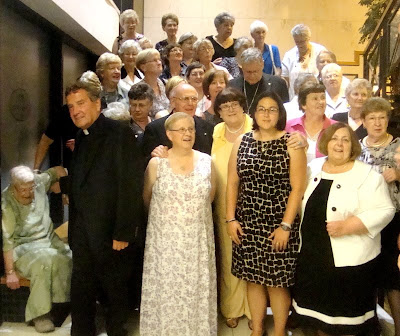 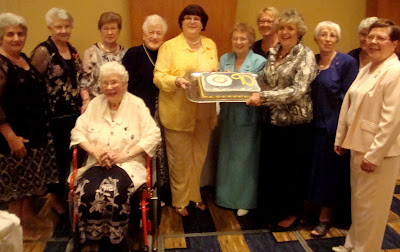 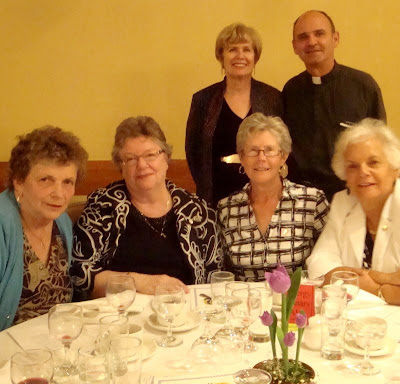 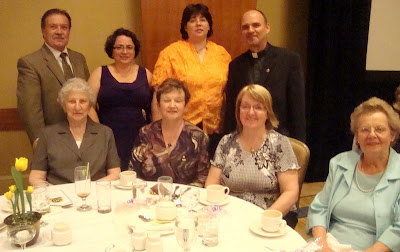 CWL members and friends from Newfoundland and Labrador
Posted by Archbishop Terry at 6:42 AM