Alberto Hurtado Cruchaga (1901-1952) is famous as a pioneer in the Latin American Church’s activities in favor of the working poor.

The founder of El Hogar de Cristo directly experienced poverty as a young man when his mother was forced to sell the family farm after his father’s death. However, a scholarship allowed Hurtado to study at the Jesuit school in Santiago.

He joined the Jesuits in 1923 but the Spanish government dissolved the Society of Jesus in 1932 while Hurtado was studying theology; the young Chilean finished his studies in Belgium where he was ordained. On returning to Chile, Hurtado exercised a typical Jesuit ministry of teaching and giving retreats.

His concern for the poor eventually led him to become director of Catholic Action, and in 1944 to ask women on a retreat to think of the men, women and children who were without a home to live in.

The women responded with donations which Hurtado used to open first a hospice for youth and then one for women and children. This was the beginning of El Hogar de Cristo. "Hogar" means home, and the name signifies that people were welcomed into Christ's home. The movement spread beyond Chile and throughout South America. 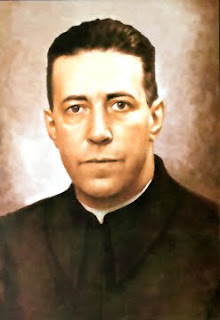 O God, in Saint Albert Hurtado, your Priest, you have given us a magnificent sign of your love; through his intercession grant that, always faithful to your will, we may love all with the sentiments of your Son and thus ceaselessly promote your Kingdom of justice, love and peace. Through our Lord. 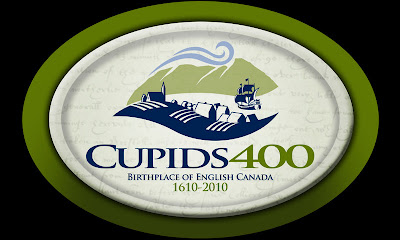 One of the first place names I learned was that of my father's hometown, Cupids, Newfoundland. He would show us coins that he had brought from home when he left to go to Canada as a teenager to find work in Montreal (eventually as an accountant with Canada Packers for several decades).

After Dad died in 1970, news from and about that rugged outpost--mainly Protestant, the Catholics belonged to St. Patrick's Parish in nearby Brigus--was shared with me by my uncle Bill and Aunt Hazel, who lived in in an apartment in Toronto's Rexdale area after their home had been expropriated to make way for the 427-401 expansions.

Eventually, I made my way there on several occasions (while giving a retreat to the priests of Grand Falls in the early 1980s, attending meetings of the Atlantic Episcopal Assembly and even, in 2001, participating in the ordination of Martin W. Currie as the eighth bishop of my dad's home diocese [known from 1856-1958 as Harbour Grace, briefly as Harbour Grace-Grand Falls (1958-64) and since 1964 as Grand Falls].

My cousins Bill and Jim Prendergast died childless, so there are no cousins bearing the Prendergast name there (though Jim's widow Margaret still lives in Cupids Crossing), and I have have a cousin Rita Butler living in the tiny village that is the centre of some attention this week as Governor General Michaelle Jean and other dignitaries are present and natives "come home" for the jubilee.

All the best to everyone in Cupids!

THE STORY OF CUPIDS

It was called Cupers Cove. The first planned settlement in this New Founde Land.

It was a rugged vista, wild and ferocious in its beauty, cruel and unforgiving to those who took it for granted. And yet John Guy and his brave pioneers thrived, prospered, explored and conquered.

Through tenacity and daring, and no small measure of sweat and toil, they wove the fabric of a culture that has resonated across the ebb and flow of centuries.

Over the next 400 years, English settlement in Newfoundland and Labrador and the rest of British North America grew to become what is now English Canada. But it all started in 1610 with John Guy’s fateful choice of Cupids as his new home.

With the first ever English colony in Canada established at Cupids in August 1610, so began the adventure of settlement in Newfoundland. Who could have predicted when John Guy and 39 faithful followers traversed the Atlantic all those years ago, that they would plant the seed from which so many communities would appear, evolve and flourish?

Amid these blossoming settlements can be found many a fine yarn (the sort of spellbinding story that has become a mainstay of the province over the years). Many of these seemingly tall tales are founded in truth however, with pillaging pirates, devastating fires and numerous "foreigners" - both friendly and otherwise – making their way and having their say on these places that still thrive today.

Heart’s Content, for instance, was well known to the settlers of Cupers Cove. Indeed the first references to this community can be found in the writings of the Cupers Cove colonists. At the time of the establishment of Cupers Cove, Heart’s Content was the territory of the native Beothuk, and it is recorded that John Guy’s Trinity Cove expedition party of 1612 spent several nights in Heart’s Content.

Soon after, Sir Percival Willoughby, another son of the London and Bristol Company that had set in motion Guy’s ventures into Newfoundland, made numerous attempts to settle people on this land. Heart’s Content is also notable for attacks by the French towards the latter part of the 17th century, though the settlers there made a quick recovery from these advances. In more recent history, Heart’s Content became world famous as the landing site for the first Transatlantic cable, instantly establishing communications between Old World Europe and the New Word of North America.

In the spring of 1612 the colonists at Cupids established a second colony at Renews on the Southern Shore of the Avalon Peninsula. However, they were forced to abandon it shortly after due to the constant threat posed by the nefarious pirate Peter Easton. Though it took some time, Renews was eventually settled permanently as noted in the first census of Newfoundland taken in 1675, recording five families living there.

Harbour Grace is another community whose roots are a direct by-product of the establishment of Cupids. Around 1616, the Bristol Company of Merchant Venturers decided to branch out from the Cupids colony and establish their own colony at Harbour Grace which they called "Bristol’s Hope". This is not the same Bristol’s Hope we know today, for in the 17th century it was known as Musket’s Cove. Prior to this period, the area was known as the location of the pirate Peter Easton’s fort, though it can be safely assumed that the settlers that followed were far more respectable. Harbour Grace has been settled ever since and is the proudly the second oldest English settlement in Canada.

The two Perlicans, Old and New, can also be traced back to the original settlement at Cupids. Old Perlican is aptly named, as one of the oldest fishing communities in Newfoundland, and because initial references to this history-rich place actually pre-date John Guy’s Cupids settlement, coming in a 1597 report penned by Captain Charles Lee. However, it would not be until the 1630s that Old Perlican was settled, having been repeatedly mentioned by Guy during his exploits in Trinity Bay some two decades earlier.

Some years later, Old Perlican would also suffer at the hands of the French, being captured and burned on February 4, 1697, and again on March 29, 1705. The latter attack would be followed up in May of the same year, this time resulting in the settlement being completely razed to the ground. Despite these attacks, and more sporadic French invasions in the following few years, Old Perlican showed the kind of resourcefulness and determination upon which it had been built, recovering to still live on today.

Yet another modern-day Newfoundland town the roots of which can be traced back to the original Cupers Cove settlement is Bay De Verde. This unusual appellation comes from the Portuguese, literally meaning “Green Bay”. This serves as a reminder that it was not only the English and French that fished the area during the 16th century, but also the Portuguese and Spanish.

In 1610, John Guy reported that some among his men were fishing in the waters off “Green Bay”, and even saw a shallop sunk at Bay De Verde in a botched bid by his settlers to retrieve an anchor. Bay De Verde was settled proper in 1637, when, on command of King Charles I, Sir David Kirke and his partners were granted fishing rights to a number of Newfoundland harbours, including Bay De Verde. The Taverner family was among the more important to settle here, in the 1650s. Bay De Verde also fell foul of unwelcome French interest in 1697, another town burned in the furious and aggressive campaign led by d’Iberville. Despite this, and a repeat attack in 1705, Bay De Verde continued to thrive and grow into the proud community it still is today.

Other neighbouring communities, such as Brigus and Bryant’s Cove share similar stories of English heritage, French aggression, and determined survival - seemingly tall tales of intrepid survival, but as true as the proud people that still call these historic settlements home today. And, always-superb subject matter for what Newfoundlanders treasure most – a good yarn told over a steaming cup of English tea! 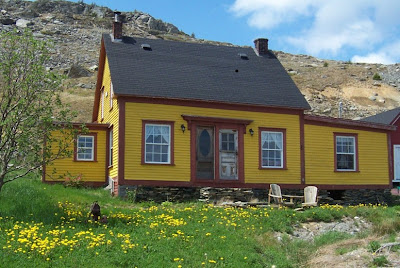 There was some good news, however, with the first child born on March 27. A son to Nicholas Guy and his wife, the boy became the first English child born in Canada.

In April 1613, John Guy left Newfoundland indefinitely. He would go on to enjoy great success as a Member of Parliament back in his native England, and campaigned vehemently for the rights of settlers back in Newfoundland throughout his political career.

In 1615, John Mason assumed the role of governor of the Newfoundland colony. In a highly successful 6-year reign, Mason chased out the pirate threat and would later go on to establish new colonies in Maine and New Hampshire. It is not clear who, if anyone, succeeded Mason as governor; however, the settlement at Cupers Cove carried on, growing and flourishing into the vibrant and proud community we today call Cupids (www.cupids400.com).
Posted by Archbishop Terry at 7:09 AM