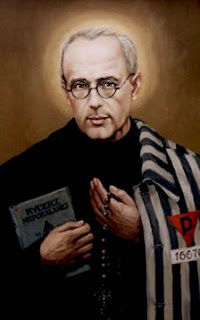 Today, we keep the liturgical memorial of Saint Maximilian Kolbe (January 8, 1894 – August 14, 1941), a Polish Conventual Franciscan friar who volunteered to die in place of a stranger in the Nazi concentration camp of Auschwitz in Poland.

He was canonized on October 10, 1982 by Pope John Paul II, and declared a martyr of charity. He is the patron saint of drug addicts, political prisoners, families, journalists, prisoners, amateur radio and the pro-life movement.

Pope John Paul II declared him "The Patron Saint of Our Difficult Century".

In Italian he is known as "San Massimiliano Maria Kolbe"; his given name in Polish is "Maksymilian", in French, "Maximilien" (www.wikipedia.org).

O God, who filled the Priest and Martyr Saint Maximilian Kolbe with a burning love for the Immaculate Virgin Mary and with zeal for souls and love of neighbour, graciously grant, through his intercession, that striving for your glory by eager service of others, we may be confirmed, even until death, to your Son. Who lives and reigns.

What is Ex corde Ecclesiae?

Tomorrow marks the 20th anniversary of an important document of Catholic Higher Education. 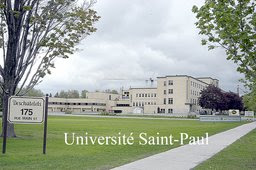 An apostolic constitution has the binding effect of Church law.

Although the first major European universities were established with Catholic sponsorship or support, Ex corde Ecclesiae was the Church’s first official document defining a Catholic college.

The constitution’s guidelines for Catholic colleges include:

Whether a Catholic university is established by the Holy See, a bishop, a religious community or lay people, it is “linked with the Church either by a formal, constitutive and statutory bond or by reason of an institutional commitment made by those responsible for it.” Every Catholic university, therefore, shares the same respect for Church authority over Catholic doctrine, practice and identity.

“A Catholic university, as Catholic, informs and carries out its research, teaching, and all other activities with Catholic ideals, principles and attitudes. …Catholic teaching and discipline are to influence all university activities, while the freedom of conscience of each person is to be fully respected. Any official action or commitment of the university is to be in accord with its Catholic identity.”

Professors’ academic freedom is guaranteed “within their specific specialized branch of knowledge, and according to the methods proper to that specific area.” Research and teaching must not intrude upon “the rights of the individual and of society within the confines of the truth and the common good.”

“All teachers and administrators, at the time of their appointment, are to be informed about the Catholic identity of the institution and its implications, and about their responsibility to promote, or at least to respect, that identity.”

Catholic theologians “are to be faithful to the Magisterium of the Church as the authentic interpreter of Sacred Scripture and Sacred Tradition.” Every professor of Catholic theology must have a “mandate” (mandatum) from the local bishop, as required in the 1983 Code of Canon Law.

“[T]he number of non-Catholic teachers should not be allowed to constitute a majority within the institution, which is and must remain Catholic.”

CROSSROADS: TAKING STEPS TO SAVE LIVES 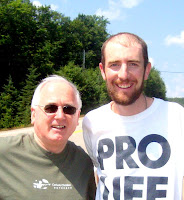 While driving westbound through Algonquin Park in late July, my friend Fr. Jim Knapp and I spotted young men with Pro Life tee-shirts walking the other way.

Only after we had passed the third did I realize that these were some of the young people whom I had heard about, walking from the West Coast to Parliament Hill to witness to the cause of life.

When we spotted the fourth walker Sean Fowler, we stopped to speak with him (he told of the great sense of God's providence they had come to know, as well as appreciating silence and the chance to pray as they made their journey).

On my return to Ottawa recently I heard that there will be a formal reception of these heroic young people today on at the flame on "the Hill" and afterwards at one of our parishes.

I am uncertain about attending myself as I must be at the eastern edge of the diocese this afternoon for the 125th anniversary of the Parish of Sainte-Anne-de-Prescott.

Here are the details for those who are able to attend: 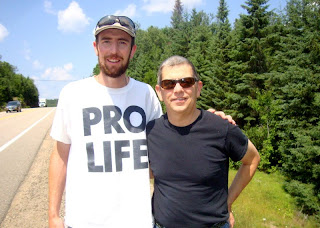 •Beginning on May 22 in Vancouver BC; arriving in Ottawa on weekend of August 14th

•Welcome them on Parliament Hill on Sat. Aug. 14, noon – at the flame

•Welcome Reception - Meet them at St. Theresa of the Child Jesus Parish, 95 Somerset Street West, in the basement hall at 1:30 pm

Come and support these courageous champions for LIFE: For more information on their schedule while in Ottawa, call Campaign Life Coalition at 613-729-0379
Posted by Archbishop Terry at 6:37 AM