Today, along with the Wednesday of the 21st week in Ordinary Time, the Church's liturgy also permits the celebration of one of two optional memorials: that of a saintly French monarch or the Spanish founder of a religious community that offered free education to the children of the poor: 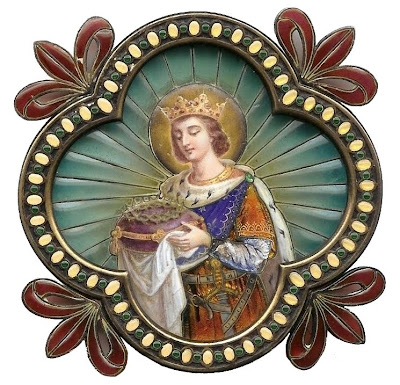 O God, who brought Saint Louis from the cares of earthly rule to the glory of a heavenly realm, grant, we pray, through his intercession, that by fulfilling our duties on earth, we may seek out your eternal Kingdom. Through our Lord.

St. Joseph, Founder of the Piarists 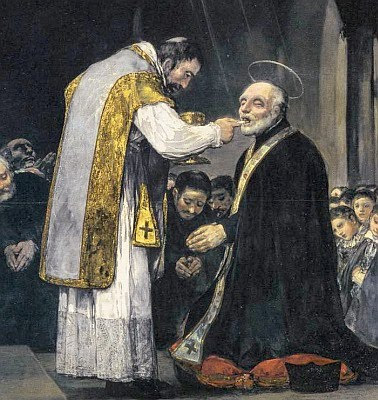 From Aragon, where he was born in 1556, to Rome, where he died 92 years later, fortune alternately smiled and frowned on the work of Joseph Calasanz. A priest with university training in canon law and theology, respected for his wisdom and administrative expertise, he put aside his career because he was deeply concerned with the need for education of poor children.

When he was unable to get other institutes to undertake this apostolate at Rome, he and several companions personally provided a free school for deprived children. So overwhelming was the response that there was a constant need for larger facilities to house their effort.

Soon Pope Clement VIII gave support to the school, and this aid continued under Pope Paul V. Other schools were opened; other men were attracted to the work and in 1621 the community (for so the teachers lived) was recognized as a religious community, the Clerks Regular of Religious Schools (Piarists or Scolopi). Not long after, Joseph was appointed superior for life.

A combination of various prejudices and political ambition and maneuvering caused the institute much turmoil. Some did not favor educating the poor, for education would leave the poor dissatisfied with their lowly tasks for society!

Others were shocked that some of the Piarists were sent for instruction to Galileo (a friend of Joseph) as superior, thus dividing the members into opposite camps. Repeatedly investigated by papal commissions, Joseph was demoted; when the struggle within the institute persisted, the Piarists were suppressed. Only after Joseph’s death were they formally recognized as a religious community.

Even in the days after his own demotion, Joseph protected his persecutors against his enraged partisans; and when the community was suppressed, he stated with Job, to whom he was often compared: “The Lord gave and the Lord has taken away; blessed be the name of the Lord!” (Job 1:21b).

While the prejudice, the scheming, and the ignorance of men often keep the truth from emerging for a long period of time, Joseph was convinced, even under suppression, that his institute would again be recognized and authorized. With this trust he joined exceptional patience and a genuine spirit of forgiveness.

O God, who adorned the Priest Saint Joseph Calasanz with such charity and patience that he laboured tirelessly to educate children and endow them with every virtue, grant, we pray, that we who venerate him as a teacher of wisdom may constantly imitate him, for he worked in harmony with your truth. Through our Lord. 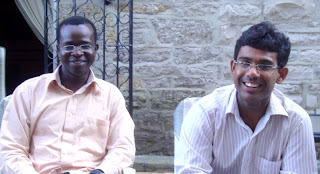 In August before folks return to school and to regular ministry, I invite my Jesuit confreres in Ottawa and those who happen to be passing through over to a barbecue on the residence's patio.

This year these included Jesuit Provincial Father Jim Webb; Father Bill Russell of the New England Province; Father Bill Robins originally from Winnipeg and for many years missioned to Kathmandu, Nepal, on home leave to celebrate his Golden Jubilee as a Jesuit and visiting his sister and nieces in the Capital).

In addition, those in attendance included two Jesuits moving this week to Toronto: Father William (Bill) Ryan, who has been in Ottawa since 1984 and Jason Vaz, a scholastic who recently completed his philosophical studies at Dominican University College. 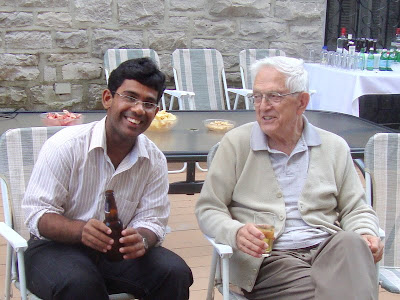 Father Ryan will have a lead role at the Jesuit Forum for Social Faith and Justice, while Jason will pursue a further degree in education at the Ontario Institute for Studies in Education (O.I.S.E.)

Some photos of the visitors and the priest-residents: 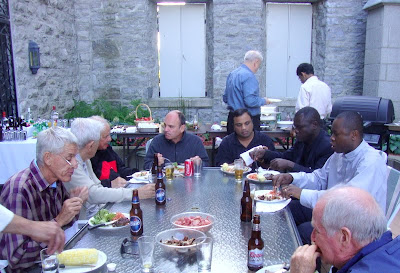 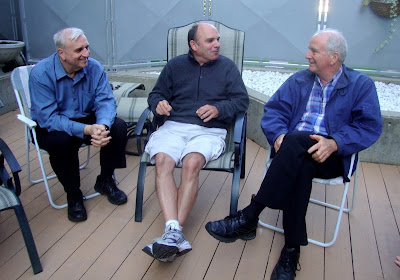 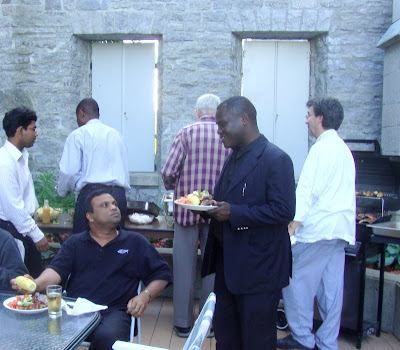