The Assumption of the Blessed Virgin, the Theotokos (Mother of God) 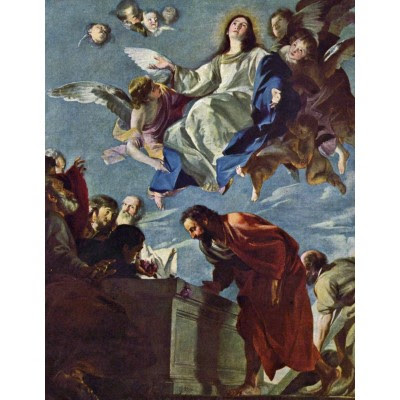 Biblical literature and other Ancient Near Eastern writings depicted chosen people sharing visions of the heavenly world. And privileged individuals even entered heaven itself. This is the background to Mary's Assumption.

Having been assumed into heaven, Mary now shares fully in the triumph over death won by her Son, the risen Lord of life. Christian disciples believe that, one day, Christ will offer them participation in the victory of heavenly life that He has already shared with His Mother.

Before development of belief in resurrection--in late Old Testament times--the cosmology of the Bible assigned a dwelling in the heavens to God alone. Human beings belonged to earth and, at their deaths, descended to the shadowy underworld of Sheol. Heroes of the Bible went to rest with their forbears at death.

Enoch experienced a different fate: "Enoch walked with God. Then he vanished because God took him" (Genesis 5:24). Later traditions interpreted this as his assumption into heaven: "It was because of his faith that Enoch was taken up and did not have to experience death" (Hebrews 11:5).

In Revelation, John spoke of being taken up to heaven and witnessing God's saving purpose: "In my vision, I saw a door open in heaven and heard the same voice speaking to me, the voice like a trumpet, saying 'Come up here: I will show you what is to come in the future'" (4:1).

An early and strong tradition interprets Revelation's image of the woman clothed with the sun as referring primarily to the church and secondarily to Mary, Mother of the Church.

Thus, it is the messianic community ("a woman clothed with the sun ... and on her head a crown of twelve stars")--the people of God established on the twelve tribes of Israel and the twelve apostles--that gives birth to the messiah ("a son, a male child who is to rule all the nations").

God's community is threatened by the great red dragon, a legendary symbol of all the enemies of God's people throughout history, from the Pharaoh of Egypt to the officials of the Roman empire in the author's day.

The imagery of Revelation is notoriously hard to decipher exactly, so it is difficult to interpret the identity of the great red dragon except in general terms.

However, given that seven and ten are numbers symbolizing fullness and completeness, the dragon associated with the bloody forces opposed to God (the colour red [cf. Revelation 6:4]) enjoys exceptional cunning ("seven heads" filled with intelligence) and power ("ten horns", symbols of might). With "seven diadems on his heads", he is a potent adversary, making pretensions to royal power.

This adversary of the community of faith stood before the woman who was about to bear a child to destroy it ("devour her child") once it was born. The child is referred to under the two symbols of his birth pangs and his being snatched away and taken to God and to his throne.

Within the book of Revelation, these terms allude to Jesus' death (his "birth", for he is frequently called "the first born from the dead"); his resurrection is depicted under an image used frequently in the New Testament, namely Jesus' exaltation to sit at God's right hand, equal with the Father in glory.

The identity of this special child is not made explicit, but our author wants the reader to understand a reference to the Messiah, who is not unknown but is clearly confessed throughout the book to be Jesus under a variety of titles. This is made explicit in the passage's concluding song of praise addressed to God and to his Messiah.

The "one thousand two hundred sixty days" is a standard figure describing a short length of time, one that reappears in several forms as three and a half years (or its variant, "time (1), times (+2), and half a time (+½)" [thus totalling 3 ½ times or years] or, alternatively, forty-two months).

What this short interval symbolizes is that the church will not have to wait long for God to bring salvation history to its glorious fulfilment.

What Christians celebrate in Mary's Assumption solemnity, then, is the destiny that awaits all believers when the glory of Christ's resurrection is revealed in them as it has been in her. 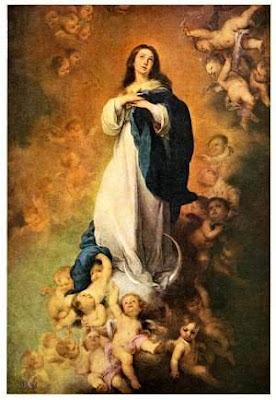 O God, who looking on the lowliness of the Blessed Virgin Mary, raised her to such grace, that your Only Begotten Son was born of her according to the flesh, and that she was crowned this day with surpassing glory; grant through her prayers, that saved by the mystery of your redemption, we may merit to be exalted by you on high. Through our Lord.
Posted by Archbishop Terry at 8:08 AM