Today several optional memorials are permitted, that of Saint Peter Julian Eymard who fostered Eucharistic adoration throughout his life and founded a religious order of priest-adorers of the Holy Eucharist who came to be known as the Priests of the Blessed Sacrament or of the martyr St. Eusebius of Vercelli. 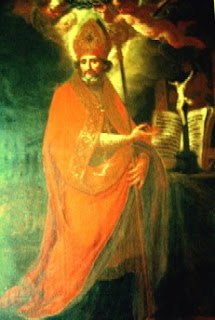 Eusebius was a Roman priest of the fourth century. According to the acts relating his martyrdom he was condemned by Constantius, the Arian Emperor, to be starved to death in a room in his own house. He was buried in the cemetery of St. Calixtus. His cult has always enjoyed special favor in Rome and his house was transformed into a church.

Lead us, Lord God, to imitate the constancy of Saint Eusebius in affirming the divinity of your Son, so that, by preserving the faith he taught as your Bishop, we may merit a share in the life of your Son. Who lives and reigns with you.

On this civic holiday Monday, I will celebrate the optional memorial for Jesuits of Blessed Peter Favre. 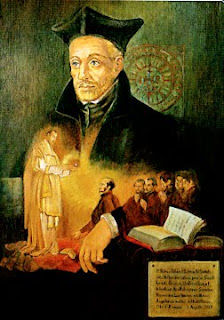 One of the original companions whose friendship at the University of Paris eventually led them to form the Society of Jesus, Pierre Favre (1506-1546) grew up as a shepherd in the high pastures of the French Alps of the Savoy region.

At the University of Paris, he met Ignatius Loyola and tutored him in Aristotle, while Ignatius tutored the former shepherd in spiritual matters.

When the "Company of Jesus", students of theology who wished to become "reformed priests" gathered at Montmartre in Paris on August 15, 1534 to commit themselves to the Lord, Favre, who had been ordained a short time before, celebrated Mass and received the vows of Ignatius Loyola, Francis Xavier and their "friends in the Lord" (illustration).

Favre became an effective preacher and giver of the Spiritual Exercises, working in Italy, Spain, Portugal and Germany.

Favre was instrumental in establishing the Society of Jesus in Portugal, and was appointed by Pope Paul III to be one of the papal theologians at the Council of Trent. He died in Rome on his way to the Council, in the presence of his friend Ignatius. 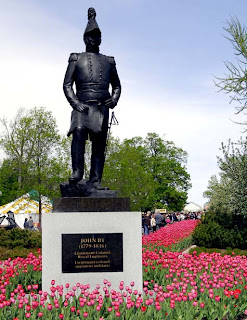 The August Civic or Bank Holiday is observed in several provinces and has acquired different designations.

I remember it as Natal Day in Halifax and Simcoe Day in Toronto; here in Ottawa, I learned recently that it is called Colonel By Day, though I doubt everyone would know that.

Often passing by the statue of By on Major's Hill Park in my neighbourhood, I have come to admire his achievement in building the Rideau Canal, one of the features of our city that help bring about its designation by Queen Victoria as Canada's Capital.

There is a long article in today's Ottawa Citizen "A Feat of Human Genius" that speaks of his remarkable accomplishment, one that was not appreciated in his day.
Posted by Archbishop Terry at 12:45 PM