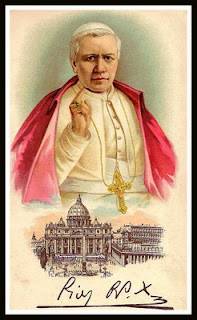 O God, who to safeguard the Catholic faith and to restore all things in Christ, filled Pope Saint Pius the Tenth with heavenly wisdom and apostolic fortitude, graciously grant that, following his teaching and example, we may gain an eternal prize. Through our Lord. 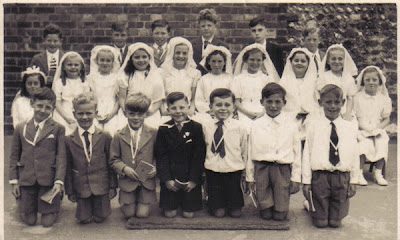 One hundred years ago this month on August 8, 1910, the Church began to encourage early (around age 7) admission of children to Confession and Holy Communion, recommending frequent, even daily reception of the Eucharist.

This centennial anniversary, on August 8, led the Prefect of the Congregation of Divine Worship and Discipline of the Sacraments, Cardinal Canizares to suggest that children could and perhaps should be encouraged to be admitted to the reception of Holy Communion even earlier. Parents, pastors, teachers and catechists will have thoughts on the desirability and practicability of this proposal.

Here are excerpts from the text of the decree approved by Pope St. Pius X, whose feast is celebrated today:

The pages of the Gospel show clearly how special was that love for children which Christ showed while He was on earth. It was His delight to be in their midst; He was wont to lay His hands on them; He embraced them; and He blessed them. At the same time He was not pleased when they would be driven away by the disciples, whom He rebuked gravely with these words: "Let the little children come to me, and do not hinder them, for of such is the kingdom of God." It is clearly seen how highly He held their innocence and the open simplicity of their souls on that occasion when He called a little child to Him and said to the disciples: "Again, I say to you, unless you turn and become like little children, you will not enter into the kingdom of heaven....And whoever receives one such little child for my sake, receives me."

The Catholic Church, bearing this in mind, took care even from the beginning to bring the little ones to Christ through Eucharistic Communion, which was administered even to nursing infants. This, as was prescribed in almost all ancient Ritual books, was done at Baptism until the thirteenth century, and this custom prevailed in some places even later. It is still found in the Greek and Oriental Churches. But to remove the danger that infants might eject the Consecrated Host, the custom obtained from the beginning of administering the Eucharist to them under the species of wine only.

Infants, however, not only at the time of Baptism, but also frequently thereafter were admitted to the sacred repast. In some churches it was the custom to give the Eucharist to the children immediately after the clergy; in others, the small fragments which remained after the Communion of the adults were given to the children.

This practice later died out in the Latin Church, and children were not permitted to approach the Holy Table until they had come to the use of reason and had some knowledge of this august Sacrament. This new practice, already accepted by certain local councils, was solemnly confirmed by the Fourth Council of the Lateran, in 1215, which promulgated its celebrated Canon XXI, whereby sacramental Confession and Holy Communion were made obligatory on the faithful after they had attained the use of reason, in these words: "All the faithful of both sexes shall, after reaching the years of discretion, make private confession of all their sins to their own priest at least once a year, and shall, according to their capacity, perform the enjoined penance; they shall also devoutly receive the Sacrament of Holy Eucharist at least at Easter time unless on the advice of their own priest, for some reasonable cause, it be deemed well to abstain for a while."

The Council of Trent, in no way condemning the ancient practice of administering the Eucharist to children before they had attained the use of reason, confirmed the Decree of the Lateran Council and declared anathema those who held otherwise: "If anyone denies that each and all Christians of both sexes are bound, when they have attained the years of discretion, to receive Communion every year at least at Easter, in accordance with the precept of Holy Mother Church, let him be anathema."

In accord with this Decree of the Lateran Council, still in effect, the faithful are obliged, as soon as they arrive at the years of discretion, to receive the Sacraments of Penance and Holy Eucharist at least once a year.

However, in the precise determination of "the age of reason or discretion" not a few errors and deplorable abuses have crept in during the course of time. There were some who maintained that one age of discretion must be assigned to reception of the Sacrament of Penance and another to the Holy Eucharist. They held that for Confession the age of discretion is reached when one can distinguish right from wrong, hence can commit sin; for Holy Eucharist, however, a greater age is required in which a full knowledge of matters of faith and a better preparation of the soul can be had. As a consequence, owing to various local customs and opinions, the age determined for the reception of First Communion was placed at ten years or twelve, and in places fourteen years or even more were required; and until that age children and youth were prohibited from Eucharistic Communion.

This practice of preventing the faithful from receiving on the plea of safeguarding the august Sacrament has been the cause of many evils. It happened that children in their innocence were forced away from the embrace of Christ and deprived of the food of their interior life; and from this it also happened that in their youth, destitute of this strong help, surrounded by so many temptations, they lost their innocence and fell into vicious habits even before tasting of the Sacred Mysteries. And even if a thorough instruction and a careful Sacramental Confession should precede Holy Communion, which does not everywhere occur, still the loss of first innocence is always to be deplored and might have been avoided by reception of the Eucharist in more tender years.

No less worthy of condemnation is that practice which prevails in many places prohibiting from Sacramental Confession children who have not yet made their First Holy Communion, or of not giving them absolution. Thus it happens that they, perhaps having fallen into serious sin, remain in that very dangerous state for a long time.

But worse still is the practice in certain places which prohibits children who have not yet made their First Communion from being fortified by the Holy Viaticum, even when they are in imminent danger of death; and thus, when they die they are buried with the rites due to infants and are deprived of the prayers of the Church.

Such is the injury caused by those who insist on extraordinary preparations for First Communion, beyond what is reasonable; and they doubtless do not realize that such precautions proceed from the errors of the Jansenists who contended that the Most Holy Eucharist is a reward rather than a remedy for human frailty. The Council of Trent, indeed, teaches otherwise when it calls the Eucharist, "An antidote whereby we may be freed from daily faults and be preserved from mortal sins." This doctrine was not long ago strongly emphasized by a Decree of the Sacred Congregation of the Council given on December 20, 1905. It declared that daily approach to Communion is open to all, old and young, and two conditions only are required: the state of grace and a right intention.... 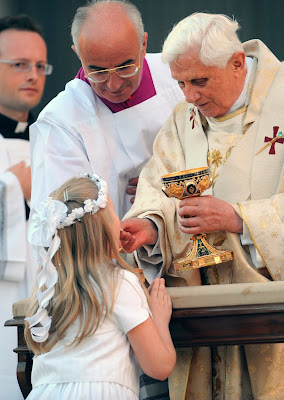 The Roman Catechism adds this: "At what age children are to receive the Holy Mysteries no one can better judge than their father and the priest who is their confessor. For it is their duty to ascertain by questioning the children whether they have any understanding of this admirable Sacrament and if they have any desire for it."


After careful deliberation on all these points, this Sacred Congregation of the Discipline of the Sacraments, in a general meeting held on July 15, 1910, in order to remove the above-mentioned abuses and to bring about that children even from their tender years may be united to Jesus Christ, may live His life, and obtain protection from all danger of corruption, has deemed it needful to prescribe the following rules which are to be observed everywhere for the First Communion of children....

1. The age of discretion, both for Confession and for Holy Communion, is the time when a child begins to reason, that is about the seventh year, more or less. From that time on begins the obligation of fulfilling the precept of both Confession and Communion.

2. A full and perfect knowledge of Christian doctrine is not necessary either for First Confession or for First Communion. Afterwards, however, the child will be obliged to learn gradually the entire Catechism according to his ability.

3. The knowledge of religion which is required in a child in order to be properly prepared to receive First Communion is such that he will understand according to his capacity those Mysteries of faith which are necessary as a means of salvation (
Posted by Archbishop Terry at 7:15 AM