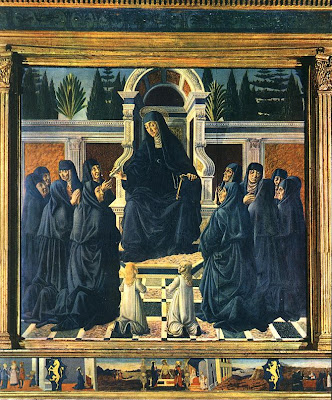 O God, who console the sorrowful and who mercifully accepted the motherly tears of Saint Monica for the conversion of her son Augustine, grant us, through the intercession of them both, that we may bitterly regret our sins and find the grace of your pardon. Through our Lord.

Today the church remembers Saint Monica, a saint especially revered by mothers because of her tireless prayers for the conversion of her wayward son, Augustine, was born of Christian parents in Tagaste, North Africa in 333, and died in Ostia, near Rome, in 387. She was married young to a government official, Patricius, who was not a Christian, and had a bad temper, though she bore her burdens patiently, and their life together was relatively peaceful. Three children were born to, Augustine, Navigius, and a daughter, Perpetua.

Augustine, the eldest son, though brilliant, was, according to his own account, a lazy and dissolute youth whose bad behavior caused his mother much grief ­ especially so after he went away to school at Madaura and to Carthage. Although Patricius became a Christian not long before he died, Augustine persisted in his pursuit of pleasure, and, as a nineteen-year-old student, joined the heretical Manichaean sect. When he began to spout heresies, Monica became alarmed, and intensified her efforts to bring him to Christ. In the Confessions, Augustine recounts Monica's dream which consoled and encouraged her:

"In her dream she saw herself standing on a sort of wooden rule, and saw a bright youth approaching her, joyous and smiling at her, while she was grieving and bowed down with sorrow. But when he inquired of her the cause of her sorrow and daily weeping (not to learn from her, but to teach her, as is customary in visions), and when she answered that it was my soul's doom she was lamenting, he bade her rest content and told her to look and see that where she was there I was also. And when she looked she saw me standing near her on the same rule." (Confessions, Book III, 9.14).

During this anguished period of prayer for her son, Monica consulted a bishop who had himself been a Manichaean before he became a Christian. He declined to intervene with Augustine, whom, the bishop correctly observed, was not open to hearing the truth. She persisted tearfully, but he refused to intervene.

Nevertheless, the bishop consoled Monica that "the child of those tears shall never perish", which she took as a sign from God. Though he continued in his heresies for nine years, Monica followed Augustine to Rome and then to Milan.in an effort to rescue her son from his errors. In Milan she met Ambrose, who helped lead Augustine into the true faith.

A few months after his conversion, Augustine, Monica and Adeodatus, set out to return to Africa, but Monica died at Ostia, the ancient port city of Rome, and she was buried there. Augustine was so deeply moved by his mother's death that he was inspired to write his Confessions, "So be fulfilled what my mother desired of me--more richly in the prayers of so many gained for her through these confessions of mine than by my prayers alone" (Book IX.13.37)

An account of Monica's early life, her childhood, marriage, her final days and her death, is given in Confessions Book IX, 8-12. He expresses his gratitude for her life:

"I will not speak of her gifts, but of thy gift in her; for she neither made herself nor trained herself. Thou didst create her, and neither her father nor her mother knew what kind of being was to come forth from them. And it was the rod of thy Christ, the discipline of thy only Son, that trained her in thy fear, in the house of one of thy faithful ones who was a sound member of thy Church" (IX.8.7).

Centuries later, Monica's body was reburied in Rome, and eventually her relics were interred in a chapel left of the high altar of the Church of St. Augustine in Rome.

The day now approaching whereon she was to depart this life (which day Thou well knewest, we knew not), it came to pass, Thyself, as I believe, by Thy secret ways so ordering it, that she and I stood alone, leaning in a certain window, which looked into the garden of the house where we now lay, at Ostia; where removed from the din of men, we were recruiting from the fatigues of a long journey, for the voyage.

We were discoursing then together, alone, very sweetly; and forgetting those things which are behind, and reaching forth unto those things which are before, we were enquiring between ourselves in the presence of the Truth, which Thou art, of what sort the eternal life of the saints was to be, which eye hath not seen, nor ear heard, nor hath it entered into the heart of man. But yet we gasped with the mouth of our heart, after those heavenly streams of Thy fountain, the fountain of life, which is with Thee; that being bedewed thence according to our capacity, we might in some sort meditate upon so high a mystery.

And when our discourse was brought to that point, that the very highest delight of the earthly senses, in the very purest material light, was, in respect of the sweetness of that life, not only not worthy of comparison, but not even of mention; we raising up ourselves with a more glowing affection towards the ‘Self-same’, did by degrees pass through all things bodily, even the very heaven whence sun and moon and stars shine upon the earth; yea, we were soaring higher yet, by inward musing, and discourse, and admiring of Thy works; and we came to our own minds, and went beyond them, that we might arrive at that region of never-failing plenty, where Thou feedest Israel for ever with the food of truth, and where life is the Wisdom by whom all these things are made, and what have been, and what shall be, and she is not made, but is, as she hath been, and so shall she be ever; yea rather, to ‘have been’, and ‘hereafter to be’, are not in her, but only ‘to be’, seeing she is eternal. For to ‘have been’, and to ‘be hereafter’, are not eternal. And while we were discoursing and panting after her, we slightly touched on her with the whole effort of our heart; and we sighed, and there we leave bound the first fruits of the Spirit; and returned to vocal expressions of our mouth, where the word spoken has beginning and end. And what is like unto Thy Word, our Lord, who endureth in Himself without becoming old, and maketh all things new?

We were saying then: If to any the tumult of the flesh were hushed, hushed the images of earth, and waters, and air, hushed also the pole of heaven, yea the very soul be hushed to herself, and by not thinking on self surmount self, hushed all dreams and imaginary revelations, every tongue and every sign, and whatsoever exists only in transition, since if any could hear, all these say, We made not ourselves, but He made us that abideth for ever—If then having uttered this, they too should be hushed, having roused only our ears to Him who made them, and He alone speak, not by them, but by Himself, that we may hear His Word, not through any tongue of flesh, nor Angel’s voice, nor sound of thunder, nor in the dark riddle of a similitude, but might hear Whom in these things we love, might hear His Very Self without these (as we two now strained ourselves, and in swift thought touched on that Eternal Wisdom which abideth over all);—could this be continued on, and other visions of kind far unlike be withdrawn, and this one ravish, and absorb, and wrap up its beholder amid these inward joys, so that life might be for ever like that one moment of understanding which now we sighed after; were not this, Enter into thy Master’s joy? And when shall that be? When we shall all rise again, though we shall not all be changed?

Such things was I speaking, and even if not in this very manner, and these same words, yet, Lord, Thou knowest that in that day when we were speaking of these things, and this world with all its delights became, as we spake, contemptible to us, my mother said, ‘Son, for mine own part I have no further delight in any thing in this life. What I do here any longer, and to what end I am here, I know not, now that my hopes in this world are accomplished. One thing there was for which I desired to linger for a while in this life, that I might see thee a Catholic Christian before I died. My God hath done this for me more abundantly, that I should now see thee withal, despising earthly happiness, become His servant: what do I here?’ (Confessions, IX.)

There follows St Monica’s final sickness, and then her passing. Finally, in , St Augustine writes:

On the ninth day then of her sickness, and the fifty-sixth year of her age, and the three-and-thirtieth of mine, was that religious and holy soul freed from the body. . . . For we thought it not fitting to solemnise that funeral with tearful lament, and groanings; for thereby do they for the most part express grief for the departed, as though unhappy, or altogether dead; whereas she was neither unhappy in her death, nor altogether dead. Of this we were assured on good grounds, the testimony of her good conversation and her faith unfeigned (Confessions, IX.xi-xii). 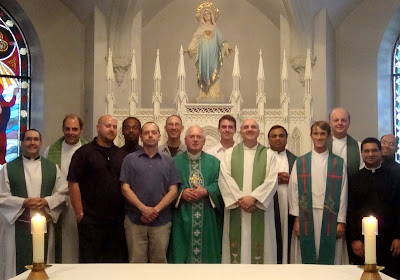 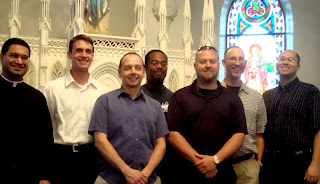 In a few days the new seminarians will be reporting for their orientation programs and, a few days later, returning candidates for the priesthood will be taking up studies again or entering upon the pastoral internship year.

So it was that several members of my staff, the vocations committee and some residents joined with most of the seminarians [a couple were absent] for a brief gathering yesterday afternoon and evening.

There was Mass in the Archbishops' Chapel, followed by supper on the patio at my residence and, for those who had not yet taken part, a brief overview of the history of the Archdiocese through visiting the formal reception rooms at 143 St. Patrick Street.

Please join in prayers of gratitude for the new men who have been accepted into the priestly formation program, keeping them and their formators at the seminaries and parishes in thought and prayer.

Ongoing prayers for vocations are still needed for the many other future priests we need.

The Vocation Director Father Tim Mccauley guides the Quo Vadis meeting to reflect on vocational matters on the Third Friday of each month. Men interested in discerning a vocation to priestly service of God's people in this forum or by private encounter may contact Father Tim Mccauley (tmccauley@archottawa.ca or [613] 738-5025, ext. 218) for help in discerning a possible call. 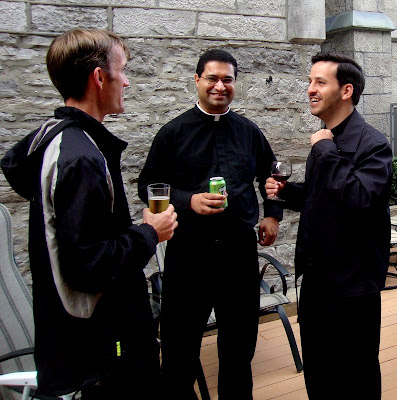 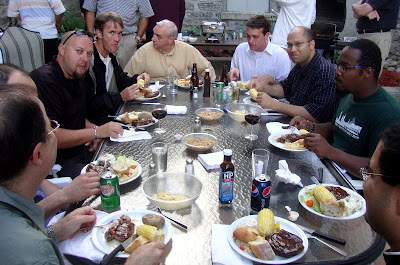 Posted by Archbishop Terry at 7:01 AM