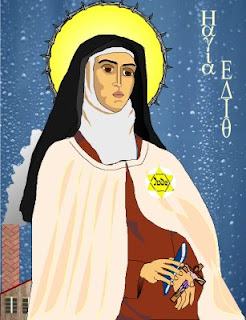 "I even believe that the deeper one is drawn into God, the more one must 'go out of oneself'; that is, one must go to the world in order to carry the divine life into it."

Today's memorial is of an extraordinary and controversial woman, St. Edith Stein, who was born in Breslau, Germany on October 12, 1891, the youngest of seven children in a prominent Jewish family.

Edith abandoned Judaism as early as 1904, becoming a self-proclaimed atheist. Her brilliant intellect was seeking truth, and she entered the University of Gottingen, where she became a protégé of the famed philosopher Edmund Husserl and a proponent of the philosophical school of phenomenology both at Gottingen and later at Freiburg in Breisgau.

She earned a doctorate in 1916 and emerged as one of Europe's brightest philosophers. One of her primary endeavors was to examine phenomenology from the perspective of Thomistic thought, part of her growing interest in Catholic teachings.

Propelled by her reading of the autobiography of Saint Teresa of Avila, she was baptized on January 1, 1922. Giving up her university post, she became a teacher in the Dominican school at Speyer, receiving as well in 1932 the post of lecturer at the Educational Institute of Munich, then resigning under pressure from the Nazis, who were in control of Germany. 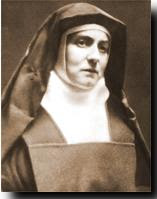 Arrested in 1942 with her sister Rosa (also a convert) as part of the order by Hitler to liquidate all non-Aryan Catholics, she was taken to Auschwitz, and, on August 9 or 10, 1942, she died in the gas chamber there.

God of our Fathers, who brought the Martyr Saint Teresa Benedicta of the Cross to know your crucified Son and to imitate him even until death, grant, through her intercession, that the whole human race may acknowledge Christ as its Saviour and through him come to behold you for eternity. Who lives and reigns with you.

THE PRIESTS WHO SURVIVED HIROSHIMA AND NAGASAKI BOMBINGS 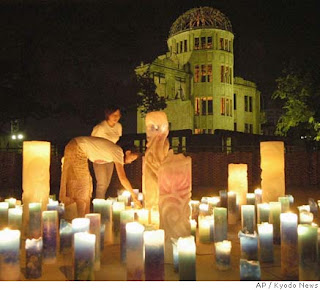 Today marks the 65th anniversary since the dropping of the atomic bomb on Nagasaki, Japan, while last Friday was the anniversary of the first atom bomb, which fell on Hiroshima. The following article by Donal Anthony Foley in the Catholic Herald (www.catholicherald.co.uk) caught my attention over the weekend and speaks of the spiritual dimensions of this experience in the lives of some Catholic religious priests:

The Feast of the Transfiguration celebrated in the Church commemorates the occasion when Christ, accompanied by Peter, James, and John, went up a high mountain – traditionally identified with Mount Tabor in Galilee – and was there “transfigured” before them, so that “his face shone like the sun, and his garments became as white as light” (Mt 17:2).

The Greek word for transfiguration is metemorphothe, from which we get the word “metamorphosis”. So the Transfiguration was a complete and stunning change in the appearance of Jesus, as his divinity shone through his humanity, in a way which completely overwhelmed the awestricken disciples. Its purpose was to prepare them for the reality of the crucifixion, so that having once seen – in some sense – his divinity, they would be strengthened in their faith.

August 6 was also an important date in world history: the fateful day on which the first atomic bomb was dropped on Hiroshima in Japan. On that day, a Monday, at 8.15 in the morning, an American B-29 bomber, Enola Gay, dropped its bomb “Little Boy”, which fell to a predetermined detonation height of about 1,900 feet above the city. It exploded with a blinding flash, creating a giant fireball, which vaporised practically everything and everyone within a radius of about a mile of the point of impact. It is estimated that up to 80,000 people were directly killed by the blast, and by the end of the year, that figure had climbed considerably higher, due to injuries and the effects of radiation. Over two thirds of the city’s buildings were completely destroyed.

But in the midst of this terrible carnage, something quite remarkable happened: there was a small community of Jesuit Fathers living in a presbytery near the parish church, which was situated less than a mile away from detonation point, well within the radius of total devastation. And all eight members of this community escaped virtually unscathed from the effects of the bomb. Their presbytery remained standing, while the buildings all around, virtually as far as the eye could see, were flattened.

Fr Hubert Schiffer, a German Jesuit, was one of these survivors, aged 30 at the time of the explosion, and who lived to the age of 63 in good health. In later years he travelled to speak of his experience, and this is his testimony as recorded in 1976, when all eight of the Jesuits were still alive. On August 6 1945, after saying Mass, he had just sat down to breakfast when there was a bright flash of light.

Since Hiroshima had military facilities, he assumed there must have been some sort of explosion at the harbour, but almost immediately he recounted: “A terrific explosion filled the air with one bursting thunderstroke. An invisible force lifted me from the chair, hurled me through the air, shook me, battered me [and] whirled me round and round…” He raised himself from the ground and looked around, but could see nothing in any direction. Everything had been devastated.

He had a few quite minor injuries, but nothing serious, and indeed later examinations at the hands of American army doctors and scientists showed that neither he nor his companions had suffered ill-effects from radiation damage or the bomb. Along with his fellow Jesuits, Fr Schiffer believed “that we survived because we were living the message of Fatima. We lived and prayed the rosary daily in that home.”

There is actually a biblical precedent for what happened to the eight Jesuits, in the book of Daniel. In Chapter 3, we read of the three young men who were thrown into the fiery furnace at the orders of Nebuchadnezzar, but who survived their ordeal and even walked around in the midst of the flames, accompanied by an angel who looked like “a son of the gods”.

After this first bombing, the Japanese government refused to surrender unconditionally, and so a second atomic bomb was dropped on the city of Nagasaki three days later on August 9. Nagasaki had actually been the secondary target, but cloud cover over the primary target, Kokura, saved it from obliteration on the day. The supreme irony is that Nagasaki was the city where two-thirds of the Catholics in Japan were concentrated, and so after centuries of persecution they suffered this terrible blow right at the end of the war.

But in a strange parallel to what happened at Hiroshima, the Franciscan Friary established by St Maximilian Kolbe in Nagasaki before the war was likewise unaffected by the bomb which fell there. St Maximilian, who was well-known for his devotion to the Blessed Virgin, had decided to go against the advice he had been given to build his friary in a certain location. When the bomb was dropped, the friary was protected from the force of the bomb by an intervening mountain. So both at Hiroshima and Nagasaki, we can see Mary’s protective hand at work.

The apparitions at Fatima in Portugal took place in 1917, when from May to October three young children, Francisco and Jacinta Marto, and their cousin, Lucia dos Santos, saw the Blessed Virgin six times, culminating in the “miracle of the sun” on October 13, when 70,000 people saw the sun spin in the sky and change colour successively, before falling to the earth in a terrifying manner. Many of those present thought it was the end of the world, but the sun reassumed its place in the sky to great cries of relief.

The essence of the Fatima message concerns conversion from sin and a return to God, and involves reparation for one’s own sins and the sins of others, as well as the offering up of one’s daily sufferings and trials. There was also a focus on prayer and the Eucharist at Fatima, and particularly the rosary, as well as the Five First Saturdays devotion, which involves Confession, Holy Communion, the rosary and meditation, for five consecutive months with the intention of making reparation to Our Lady (for more details visit Theotokos.org.uk).

It’s interesting to reflect, then, on the theme of “transfiguration” which links these various events. Christ’s face shone like the sun on Mount Tabor, and at Fatima, Our Lady worked the great miracle of the sun to convince the huge crowd which had gathered there that the message she was giving to mankind was authentic.

Consider, too, that the poor people of Hiroshima and Nagasaki suffered as man-made “suns” exploded in their midst causing horrific devastation. But at Hiroshima the eight Jesuits, who were living the message of Fatima, and particularly the daily rosary, were somehow “transfigured,” protected by God’s divine power, from the terrible effects of the bomb.

Surely there is a message here for all of us, that living the message of Fatima, in a world which grows ever more dangerous, and which is still threatened by nuclear war, is as profound a necessity for us as it was for Fr Schiffer and his companions.
Posted by Archbishop Terry at 7:31 AM