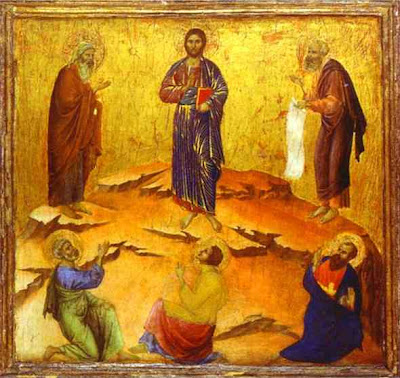 What to make of the mystery of today's feast of the Transfiguration of Jesus? This remains a puzzle in New Testament research and in Christian spirituality.

Some scholars detect in the Transfiguration story features found in the Resurrection appearances breaking into the public ministry of Jesus (e.g., white garments, the shining of the garments, fear).

In the post-Easter narratives, however, an angel or Jesus generally gives specific individuals a commission to proclaim the Resurrection. By contrast, after the Transfiguration, a command to silence is given the disciples by Jesus in the gospels of Mark and Matthew. Luke simply observes that “the disciples kept silent and in those days told no one any of the things they had seen”.

The Transfiguration remains a unique episode in the public ministry of Jesus that heralds both His coming Passion and Exaltation.

Jesus goes up the mountain to pray (only Luke gives this reason), during which He is transfigured. The Transfiguration prepares for a meeting with “two men,” who are identified as Moses and Elijah. Now the disciples, who have been kept out of view, are grafted into the scene, managing to overcome sleep to witness the heavenly trio of Jesus, Moses and Elijah.

Subtly, the perspective shifts to the interior experience of Peter, James and John. As the heavenly visitors prepare to leave, Peter tries to prevent the ending of their mystical experience. The rejoinder to Peter's remark comes not from Jesus but from an enveloping cloud that both reveals and conceals God's presence.

Evoking an awesome fear, God's voice from heaven declares that Jesus' suffering path to glory (his exodos, poorly rendered as departure) cannot be bypassed by extending this foretaste of resurrection glory.

Once God's voice has spoken, the scene reverts to what it was before the Lord’s prayer, Jesus alone with His chosen disciples. The stunned disciples not unnaturally keep to themselves what they have gone through.

Though the Lectionary selection omits it, the introductory verse of the Transfiguration story says that the Transfiguration took place “eight days after” Jesus had begun to teach His followers that He would suffer, die and rise (Luke 9:21-22). Immediately after that prophecy, Jesus declared that any who wanted to be disciples had to take up their cross and follow Him (9:23-26).

Peter, James and John had to learn from Jesus a great deal, which they would share later with the church. They had to listen attentively, for much of what they were hearing was not what they expected. This is why the divine voice offered assurances that what Jesus taught about suffering was pleasing to God (“this is my Son, my chosen; listen to him!”).

At the KofC's 128th Supreme Convention in Washington 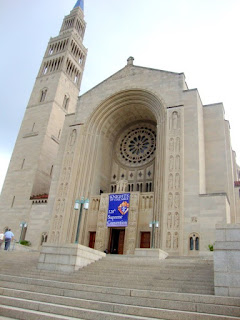 Wednesday evening, the planes from Ottawa were late leaving--on account of torrential rains in the afternoon for the second day in a row--and even later getting into the National Capital's MacDonald Cartier Airport From Washington's Dulles airport (circa 1AM).

So yesterday, things got off to a slow start and I am only now getting around to sorting through the photos taken at the shindig and uploading them to this blog.

The Opening Mass in the [US] National Basilica of the Immaculate Conception, with its imposing 300+ foot tower sponsored by the Knights, was reverent and uplifting. 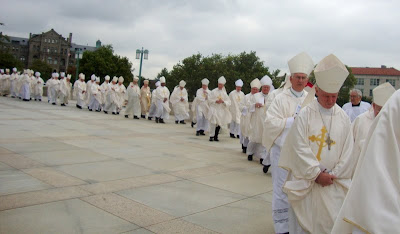 Some eighty bishops and several cardinals were in attendance, including His Eminence Jaime Ortega, Archbishop of Havana, Cuba, on whom the Gaudium et Spes medal, the highest honour of the KofC, was conferred. 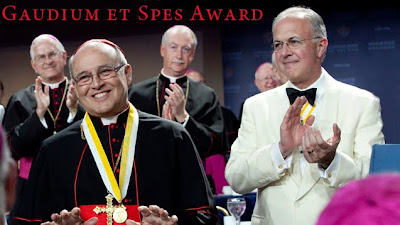 Cardinal Ortega is only the eighth person to be so honoured, and this for his heroic work to obtain freedom for the Church to carry out its mission and to win, as he recently did, freedom for numerous political prisoners held by the Communist regime.

Some other pix from the assembly: 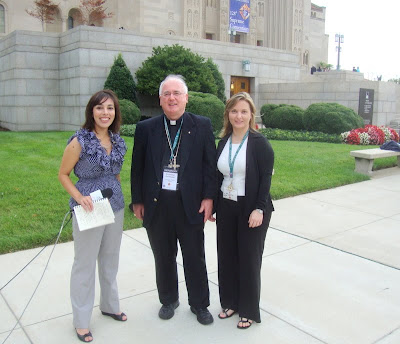 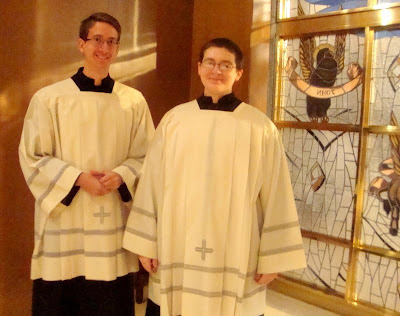 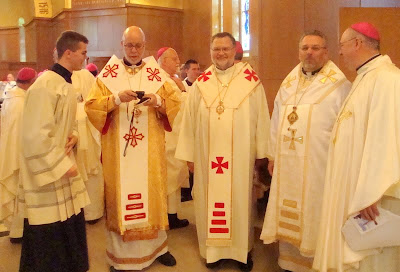 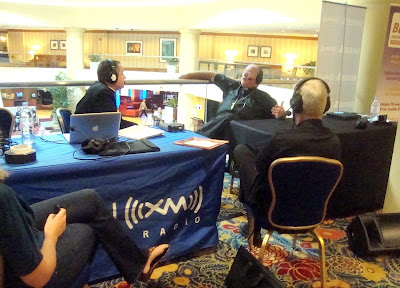 New York's Archbishop Timothy Dolan is one of many interviewed by the media, here for Sirius Satellite Radio's Catholic Program 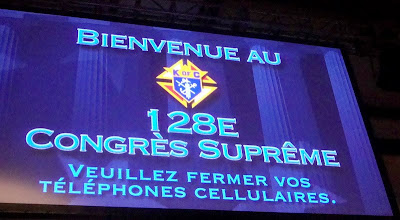 The invitation to turn off cell phones appeared in English, Polish and Spanish, in addition to Canada's other official language 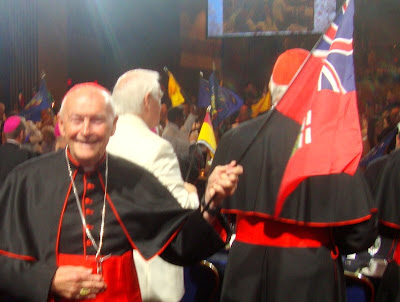 In the closing session Thursday morning, it was announced that the 129th Supreme Convention will be held the first week of August 2011, in Denver. The Colorado State Council is already planning a Rocky Mountain welcome to all Knights and their families, said State Deputy Foster Sauter.

Supreme Knight Carl Anderson followed with his final remarks. He announced that the whole Order will engage in a novena during the month of October in thanksgiving for the canonization of Blessed Andre Bessette, the founder of St. Joseph’s Oratory in Montreal. Blessed Andre, who died at the age of 92 in 1937, will be canonized on October 17th.

The supreme knight urged all Knights to engage in the Order’s spiritual development initiative, under the guidance of Bishop Lori. Every parish that is served by a council should see the Knights as men of faith and action who are “resplendent in the virtues of faith, hope and charity,” he said.

Every council should “take up the challenge to do one more charitable activity” in the present fraternal year, he continued. And every member should “give one more hour of volunteer service.” The small increase in effort will pay huge benefits for communities, parishes and those in need, he noted.

Recounting the difficult historical periods the Order has passed through in its 128 years, the supreme knight said that to the people of those times, it might have been unclear whether the sun was rising or setting upon the Knights of Columbus. But the men of the Order rose to the challenge each time and continued to build the Order decade by decade, working with the vision of Father Michael McGivney.

Today, Anderson continued, with the many challenges to the Church, it may seem to some that dark days are upon the faith. Yet he told the delegates, “It is up to you and me to make sure that it is a rising sun for the Knights of Columbus.”
Posted by Archbishop Terry at 7:00 AM