Today and tomorrow, I am attending the Supreme Convention of the Knights of Columbus in Washington, DC (see below).

On Saturday, I journeyed to the annual Jesuit gathering for the Jesuits in English Canada, this year in Guelph (Mass and luncheon reception with family and friends at Holy Rosary Church; then activities and supper at Loyola House).

In recent years, this annual reunion has been held at Manresa House in Pickering. Next year, to commemorate the 400th anniversary of the arrival of Jesuit missionaries in Canada, it will take place as part of a Province Congress at the Martyrs Shrine in Midland, ON.

Some photos of the day:

Friends and benefactors mingle with Jesuits after Mass

Gathering to hear reports from Father Provincial, Jim Webb and a little humourous background on the jubilarians

128th Supreme Council of the K of C./Annual Convention 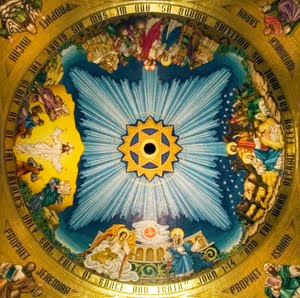 The Knights of Columbus Incarnation Dome located inside the Basilica of the National Shrine of the Immaculate Conception.

The Opening Mass will take place today at 9:30AM in the Basilica of the National Shrine of the Immaculate Conception. Business sessions begin at 1PM and the States Dinner takes place at 7:30PM.

Tomorrow there is a concelebrated Mass at 8AM, with further business sessions and a chance for members present from a given State (e.g. Ontario) to rendez-vous and share time with the bishops present. 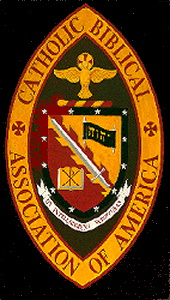 The 73rd International Meeting of the Catholic Biblical Association of America (and Canada) will close its deliberations today with the Mass during which the names of members who passed away in the previous year will be recalled. Included among these will be my teacher and colleague at Regis College, Fr. Joseph Plevnik, S.J. and good friend of all, the Paulist Lawrence Boadt, who died last week in New Jersey of cancer, aged 67.

Larry was possessed of an extraordinarily effusive, even bubbly personality; everyone liked him, respecting him as a scholar and appreciating his encouragement to publish whatever would help people grow in their love for God's Word.

The following article that appeared in yesterday's New York Times mentions his book Understanding the Old Testament, which I personally found very helpful the one time I taught an introductory course on the Old Testament (at Regina's Campion College at the University of Regina in the fall of 1988).

The Rev. Lawrence Boadt, a Roman Catholic priest, publisher and Bible scholar who used his study of the Old Testament as a vehicle for promoting understanding between Christians and Jews, died on Saturday at his home in Mahwah, N.J. He was 67.

The cause was cancer, said Stefani Manowski, media director of the Paulist Fathers, Father Boadt’s order.

As a publisher, Father Boadt was long associated with the Paulist Press, located in Mahwah. Founded in New York by the Paulist Fathers in 1881 as the Columbus Press, the Paulist Press is one of the country’s most distinguished religious publishing houses, producing books by writers of all faiths. He was its president and publisher from 1998 until shortly before his death.

As a scholar, Father Boadt, who had been rigorously trained in Semitic languages, specialized in the Old Testament. In his writing, teaching and frequent public lectures on interfaith understanding, he invoked Old Testament Scripture to underscore the commonalities not only between Christianity and Judaism but also between antiquity and modernity.

His seminal work, “Reading the Old Testament: An Introduction” (Paulist Press, 1984), explored the Hebrew Bible for a Christian readership. In it, he wrote:
“It makes sense to begin the study of Bible through the Old Testament. But we run the risk that for Christians it may appear only as a long-past and nearly dead history. To prevent this loss of a living sense of the Old Testament, it helps Christians to experience firsthand the biblical faith of modern Jews.”

He added: “Christians, who are often woefully ignorant of the Jewish roots of their own Christian faith, and only vaguely aware of any Jewish practices, could gain some feeling for the Old Testament by attending a Friday night Sabbath service at a local temple or synagogue. Seeing a Jewish community at worship will reveal the deep and inspiring faith which Judaism keeps alive today.” 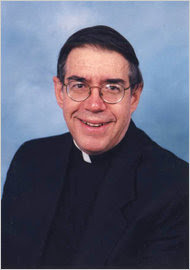 Lawrence Edward Boadt was born in Los Angeles on Oct. 26 1942, the son of two lawyers, Loren Boadt and the former Eleanor Power. (The family name is pronounced “boat.”) Information on survivors could not be confirmed.

He entered the Paulist novitiate in 1962 and was ordained in 1969.
In the 1970s, Father Boadt taught at Fordham University and St. John’s University in Queens. From 1976 to 1997 he taught at the Washington Theological Union.
Besides “Reading the Old Testament,” his books include “Ezekiel’s Oracles Against Egypt: A Literary and Philological Study of Ezekiel 29-32” (Biblical Institute Press, 1980); “Introduction to Wisdom Literature, Proverbs” (Liturgical Press, 1986); and “Why I Am a Priest: Thirty Success Stories” (Paulist Press, 1999), an anthology Father Boadt edited with Michael J. Hunt.

He joined the Paulist Press in 1975 as its Scripture editor. The press’s publications include several multivolume series, among them Classics of Western Spirituality, comprising works by Catholic, Protestant, Jewish and Islamic writers; Stimulus Books, which examines issues of common interest to Christians and Jews; and Responses to 101 Questions, whose titles explore topics like Hinduism, Confucianism, the Dead Sea Scrolls, Eastern Orthodoxy and evolution.
Posted by Archbishop Terry at 7:12 AM