Eighteenth Sunday - In gratitude, being rich towards God

Though not numerous, among Jewish and Christian readers there have always been fans of this original thinker, named Ecclesiastes in Greek or Qoheleth in Hebrew ("the Preacher" in either case): sceptics, individuals with a dark vision of reality and recovering alcoholics or other 12-step programs.

A learned commentator has summarized the key ideas of this wisdom writing as follows: human achievement is weak and impermanent; the fate of human beings is uncertain; human beings find it impossible to attain to true knowledge and insight into the world; the goal of human striving needs to be joy, the divine imperative. Only the last boldly affirms life. But it points to something deep within human nature, an ineradicable desire for happiness planted by God. Living a moral life by following God's will, then, is the true pursuit of happiness.

In Hebrew, the doubling of a word makes it into a superlative. Thus "the holy of holies" is the holiest place. And the absurdity of absurdities or "vanity of vanities" means the most absurd or most fleeting of realities. Yet this is how "the Preacher" characterizes life itself! It is exemplified by someone working hard to amass goods and property only to have to leave it in death to someone who did not toil at all. For many in the world, life is sheer drudgery and pain ("even at night their minds do not rest").

What the sacred author wants people to realize is that life is absurd until meaning is thrust upon it by acts of courage and faith. The book stresses that God intends people to enjoy life. From clinging to that teaching there comes respite and relief from the sense of futility people otherwise experience. 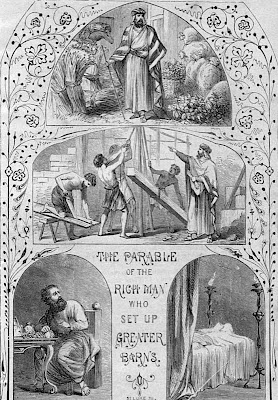 Amidst a collection of sayings on a wide variety of topics (Luke 12:1-59), Jesus warned against the belief that life consists in material goods ("Take care! Be on your guard against all kinds of greed; for one's life does not consist in the abundance of possessions"). Though He had been asked to mediate a family dispute about an inheritance, Jesus refused, hinting that avarice lay at its root.

Then Jesus told a parable to reinforce His teaching. An already prosperous man began to make plans for the future out of a desire for security to enjoy to the full what he had acquired. He was heedless of the ultimate crisis for which he should have been ready, his death. God, the author of this crisis, called him a fool.

In his soliloquy the rich man realized that the harvest's bounty had exceeded his expectations. His problem consisted in his desire to store it up for his use. The thought of sharing his abundance with people in need never crossed his mind. The man had shut everyone else out of his life and thoughts. There was no one else in the story until God called him to account.

The truism that life is threatened by death or the commonplace that "you cannot take it with you when you die" receives an added dimension within the teaching of Jesus. In His preaching of the coming of God's kingdom there lies a challenge that disciples not "store up treasures for themselves" but become "rich toward God". Jesus pleaded for a right evaluation and use of material wealth. Being truly 'rich toward God' involved making use of one's riches, in obedience to God, to help the poor.

Paul noted that God had lavishly blessed sinners by raising them to newness of life with Christ. Their response must be a total self-renewal, including putting to death all self-seeking, "evil desire, and greed, which is idolatry".

PRAYER FOR THE 18TH SUNDAY IN ORDINARY TIME

Draw near to your servants, O Lord,
and answer their prayers with unceasing kindness,
that, for those who glory in you as their Creator and guide,
you may restore what you have created
and keep safe what you have restored.
Through our Lord....
Posted by Archbishop Terry at 7:27 AM