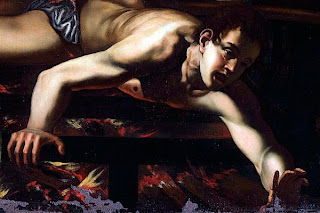 Today's memorial is of St. Lawrence, deacon and martyr. This young deacon and heroic martyr is numbered among those saints who were most highly venerated by the ancient Roman Church.

Next to the feast of Sts. Peter and Paul, that of St. Lawrence ranked highest in the Roman sanctoral cycle. "From the rising of the sun unto its setting," says St. Leo, "whenever the glory of Levites beams forth in splendor, Rome is deemed no less illustrious because of Lawrence than Jerusalem because of Stephen." 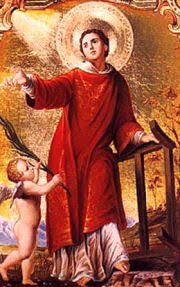 Even though we have no genuine account of St. Lawrence's martyrdom, we do possess considerable evidence from most ancient times regarding the particulars of his passion. Legendary Acts tell how Lawrence was a disciple of Pope Sixtus II (257-258), who dearly loved him because of his special talents, but principally because of his innocence; in spite of his youth, the Pope numbered him among the seven deacons of Rome and raised him to the position of archdeacon.

As such, Lawrence had the immediate care of the altar and was at the side of the saintly Pope whenever he offered the holy Sacrifice; to him also was confided the administration of the goods of the Church and the responsibility of caring for the poor.

During the persecution of Emperor Valerian (253-260), Sixtus II and his four deacons were martyred. Very ardently Lawrence desired to die with his spiritual father and therefore said to him: "Father, where are you going without your son? Where are you hastening, O priest, without your deacon? Never before did you offer the holy Sacrifice without assistants. In what way have I displeased you? In what way have you found me unfaithful in my office? Oh, try me again and prove to yourself whether you have chosen an unworthy minister for the service of the Church. So far you have been trusting me with distributing the Blood of the Lord."

This loving complaint of joyous self-oblation Sixtus answered with words of prophecy: "I am not forsaking you, my son; a severer trial is awaiting you for your faith in Christ. The Lord is considerate toward me because I am a weak old man. But for you a most glorious triumph is in store. Cease to weep, for already after three days you will follow me".

After these comforting words he admonished him to distribute all the remaining Church goods allocated to the poor. While Lawrence was dispersing these items in the house of a certain Narcissus, a blind man named Crescentius asked for healing help by the imposition of hands. The holy deacon made the Sign of the Cross over him and the man began to see.

From his relations with Pope Sixtus, it was known that he acted as the steward over the Church's property. He was arrested therefore and placed under the watch of a certain Hippolytus. There in prison Lawrence cured the blind Lucillus and several other blind persons; impressed thereby, Hippolytus embraced the faith and died a martyr.

Lawrence was tortured, scourged, and scorched with glowing plates. In the midst of excruciating pain he prayed: "Lord Jesus Christ, God from God, have mercy on Your servant!" And he besought the grace of faith for the bystanders. At a certain point the soldier Romanus exclaimed: "I see before you an incomparably beautiful youth. Hasten and baptize me." He had observed how an angel dried the wounds of Lawrence with a linen cloth during his passion.

Again during the night he was dragged before the judge and threatened with immediate death. But he replied: "My God I honor and Him alone I serve. Therefore I do not fear your torments; this night shall become as brightest day and as light without any darkness."

When placed upon the glowing gridiron, he jested with his executioners and the cruel tyrant. "Now you may turn me over, my body is roasted enough on this side." Shortly after this had been done, he cried again: "At last I am finished; you may now take from me and eat." Then turning to God in prayer: "I thank You, O Lord, that I am permitted to enter Your portals." To comfort him during his torments God said to him: "My servant, do not be afraid. I am with you." He was put to death upon the Viminal Hill and buried on the Tiburtinian Way.

Such the passion and death of this Christian hero, a story that in the Roman Breviary is told by the antiphons and responsories. Already in Constantine's time there was erected over his grave a church that belonged to the seven major basilicas of Rome, St. Lawrence Outside the Walls (excerpted from Pius Parsch The Church's Year of Grace).

O God, giver of that ardor for you, by which Saint Lawrence was outstandingly faithful in service and glorious in martyrdom, grant that we may love what he loved and put into practice what he taught. Through our Lord. 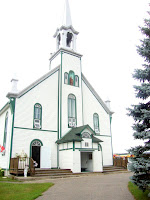 The 56th Annual Marian Pilgrimage to the Shrine of Knock at St. Malachy's Church, Mayo, Quebec

Sunday broke sunny and cool for the Pilgrimage to Our Lady of Knock Shrine. The following photos depict the church, the Mass, the congregation of around 700, conversations and a barbecue luncheon following Mass, a procession with rosary to the cemetery, followed by Exposition and Benediction of the Blessed Sacrament in St. Malachy church.

The sky grew increasingly dark and threatening as the events of the day progressed, but the rain held off until the prayer services were over and people were heading home (many to Gatineau and Ottawa, but others to Montreal, Toronto and the USA).

The forty families remaining in the Mayo farming community have done a wonderful job of carrying on their parish's tradition, although as they age it may be difficult to continue the tradition now approaching 6o years.

Kudos to the parishioners of St. Malachy's and the residents of Mayo! 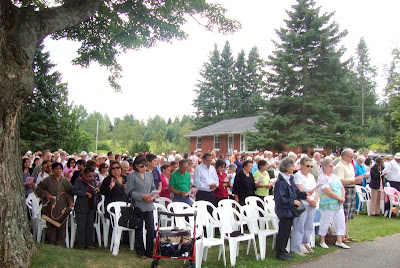 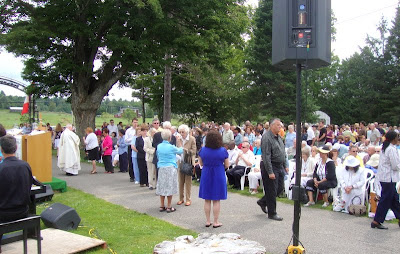 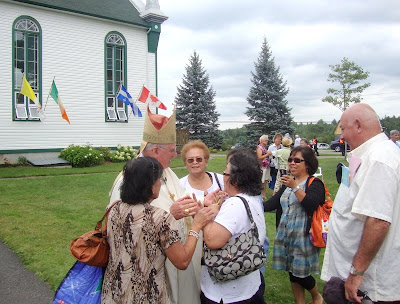 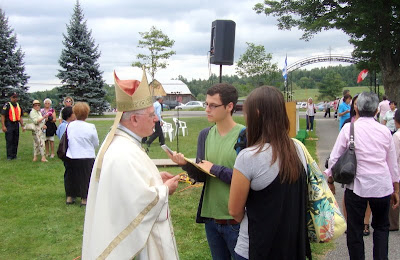 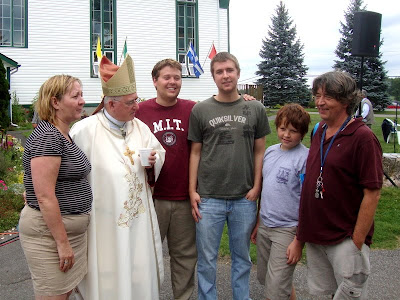 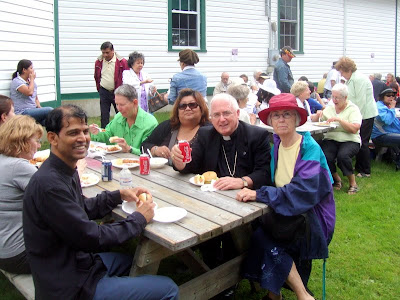 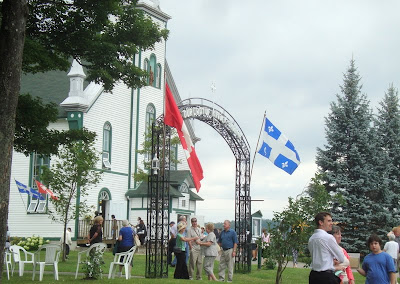 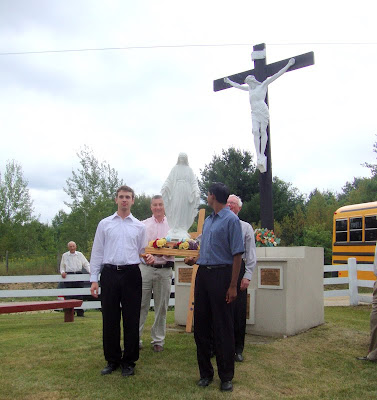 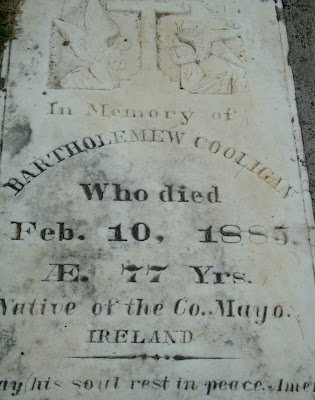 Posted by Archbishop Terry at 7:33 AM