St. Cajetan or Sts. Sixtus II and companions, martyrs - Pilgrimage to Our Lady of Knock Shrine in Mayo, Quebec

Today is the First Saturday of the Month, where a Mass in honour of the Blessed Virgin Mary may be celebrated.

As well, there are two optional memorials--that of St. Cajetan, Founder of the Theatines or the martyrs, Pope Sixtus II and Companions who are associated with St. Lawrence's martyrdom on August 10. 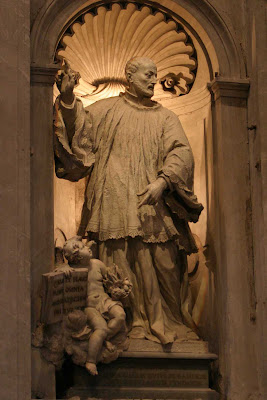 This is the statue of St. Cajetan, founder of the Theatines in St. Peter's Vatican Basilica.

Born to the Venetian nobility. Caytanao studied law in Padua, and was offered governing posts, but turned them down for a religious vocation.

Ordained at age 36. In 1522, Cajetan founded a hospital in Venice, Italy for victims of incurable illness. Cajetan was aware of the need of reformation in the Church, and felt called to enter a religious community to serve the sick and poor.

On May 3, 1524, with three others, including John Peter Caraffa who later became Pope Paul IV, he formed the Congregation of Clerks Regular (Theatines) at Rome, Italy with the mission of fostering the Church’s mission and reviving the spirit and zeal of the clergy. Founded a bank to help the poor and offer an alternative to usurers (loan sharks); it later became the Bank of Naples. 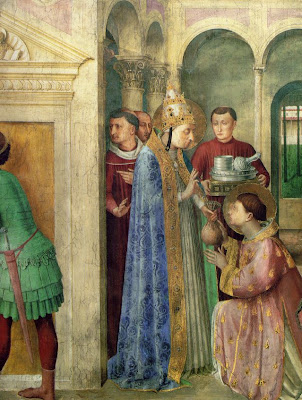 Even though his reign was short, he restored relations with the African and Eastern churches following strained relations under Pope Stephen I. The issue that caused the dispute was the rebaptism of heretics. Pope St. Sixtus II believed that anyone who was baptised with a desire to be a Christian, even if the Baptism was performed by a heretic, was truly baptised into the faith; the validity of his faith was based on his own desire and actions, not the errors of the person who performed the sacrament.

Thankfully, St. Sixtus II restored relations with the churches that disagreed with Rome. Yet, not one year after his elevation to the papacy, he was beheaded by order of Emperor Valerian I in 258.

Emperor Valerian I had issued a decree shortly before the pontificate of Sixtus II forbidding Christians to gather in cemeteries and demanding them to worship pagan gods. In early August 258, Emperor Valerian ordered the excecution of priests, bishops, and deacons.

Pope Sixtus II was one of the first victims of the persecutions by Valerian. Four deacons, Januarius, Vincentius, Magnus, and Stephanus, were apprehended at the same cemetery as Pope Sixtus II and beheaded.

Pope Sixtus II was beheaded in his chair, which was later enshrined behind his tomb. Two other deacons, Felicissimus and Agapitus, were martyred the same day. Today we remember Sts. Sixtus II and his six companions who died for the Faith.

Before Pope St. Sixtus II was martyred, his deacon St. Lawrence, came to him and said: "Father, where are you going without your son? Where are you hastening, O priest, without your deacon? Never before did you offer the holy Sacrifice without assistants. In what way have I displeased you? In what way have you found me unfaithful in my office? Oh, try me again and prove to yourself whether you have chosen an unworthy minister for the service of the Church. So far you have been trusting me with distributing the Blood of the Lord."

To this Pope Sixtus II replied, "I am not forsaking you, my son; a severer trial is awaiting you for your faith in Christ. The Lord is considerate toward me because I am a weak old man. But for you a most glorious triumph is in store. Cease to weep, for already after three days you will follow me." 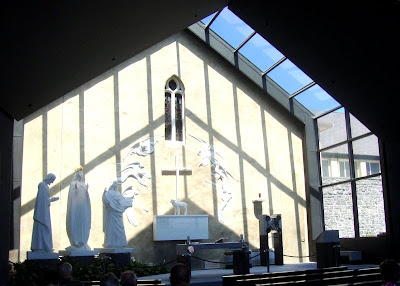 The chapel of the apparition, Knock, Ireland

PILGRIMAGE TO THE SHRINE OF KNOCK IN MAYO, QUEBEC 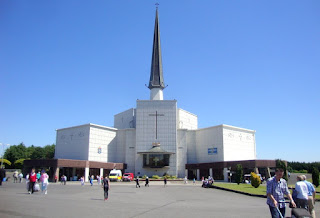 Tomorrow at 11AM, I will preside at Mass for the 56th annual summer pilgimage to Our Lady of Knock shrine in Mayo, Quebec, a shrine Irish Catholics developed to recall the appearance of Our Lady, St. Joseph, St. John, the Lamb of God and angels at Knock, Ireland.

Here is some of the history of Knock, Ireland:

On the evening of August 21, 1879, people whose ages ranged from five years to seventy-five and included men, women, teenagers,children, witnessed what they claimed was an apparition of Our Lady, St Joseph, and St John the Evangelist at the south gable end of the local small parish church, the Church of St John the Baptist. Behind them and a little to the left of St John was a plain altar. On the altar was a cross and a lamb (a traditional image of Jesus, as reflected in the religious phrase The Lamb of God) with adoring angels.

The Blessed Virgin Mary was described as being very beautiful, standing a few feet above the ground. She wore a white cloak,hanging in full folds and fastened at the neck. The crown appeared brilliant, and of a golden brightness, of a deeper hue, than the striking whiteness of the robe she wore; the upper parts of the crown appeared to be a series of sparkles, or glittering crosses.

She was described as "deep in prayer", with her eyes raised to heaven, her hands raised to the shoulders or a little higher, the palms inclined slightly to the shoulders. Bridget Trench "went in immediately to kiss, as I thought, the feet of the Blessed Virgin; but I felt nothing in the embrace but the wall, and I wondered why I could not feel with my hands the figures which I had so plainly and so distinctly seen".

St Joseph, also wearing white robes, stood on the Virgin's right hand. His head was bent forward from the shoulders towards the Blessed Virgin in respect.

St John the Evangelist stood to the left of the Blessed Virgin. He was dressed in a long robe and wore a mitre. He was partly turned away from the other figures. He appeared to be preaching and he held open a large book in his left hand.

To the left of St John was an altar with a lamb on it with a cross standing on the altar behind the lamb.

Those who witnessed the apparition stood in the pouring rain for up to two hours reciting the Rosary. When the apparition began there was good light, but although it then became very dark, witnesses could still see the figures very clearly - they appeared to be the colour of a bright whitish light. The apparition did not flicker or move in any way.

The witnesses reported that the ground around the figures remained completely dry during the apparition although the wind was blowing from the south. Afterwards, however the ground at the gable became wet and the gable dark. 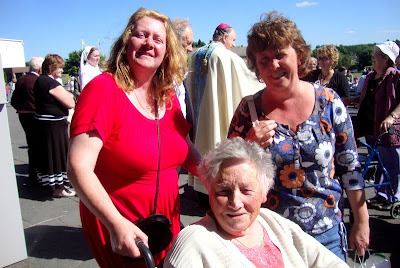 Pilgrims at Shrine of Our Lady of Knock, Ireland 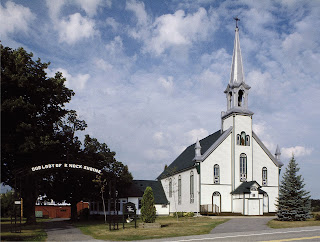 Our Lady of Knock Shrine – The geographical location and panoramic setting of Mayo, Quebec is very close to the landscape of the original shrine in Knock, Ireland as the people of this municipality are descendants of the early Irish settlers from County Mayo.

Father Braceland, who was appointed pastor in 1949, was inspired to erect a replica of Our Lady of Knock Shrine in Canada . The planning, building and equipping of the Shrine took five years. It was designed by an Ottawa artist, Bruno Duceshi. On July 16, 1955, the new shrine was blessed and formally opened by His Excellency, Most Rev. J.J. Lemieux, D.D., Archbishop of Ottawa.

The story of the apparition and a devotion to Our Lady of Knock was brought to Eastern Canada as early as 1882. This is how the pastor’s housekeeper related the event as it happened: “On the evening of the 21 of August 1879, Our Lady, St. Joseph and St. John the Evangelist appeared at the south gable of the church of Knock. The vision also included an altar on which there stood a lamb and a Cross. The apparition lasted approximately two hours. Not a word was spoken. No particular message was given to the fifteen people who beheld the vision”.

This devotion continues and is still evident today, not only in Ireland , but also at our annual pilgrimage and those who visit during the year.

Sunday Eucharist at 11:00am; 1:45pm Rosary, procession to the cemetery, 2:45 Exposition of the Blessed Sacrament.