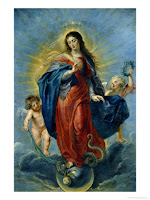 "[Mary] gave to the world the Life that renews all things, and she was enriched by God with gifts appropriate to such a role.

"It is no wonder, then, that the usage prevailed among the holy Fathers whereby they
called the mother of God entirely holy and free from all stain of sin, fashioned by the Holy Spirit into a kind of new substance and new creature.

"Adorned from the first instant of her conception with the splendors of an entirely unique holiness, the Virgin of Nazareth is, on God’s command, greeted by an angel messenger as ‘full of grace’ (cf. Luke 1:28).

"To the heavenly messenger she replies: ‘Behold the handmaid of the Lord, be it done to me according to thy word’ (Luke 1:38)” (Dogmatic Constitution Lumen Gentium "On the Church", 56). 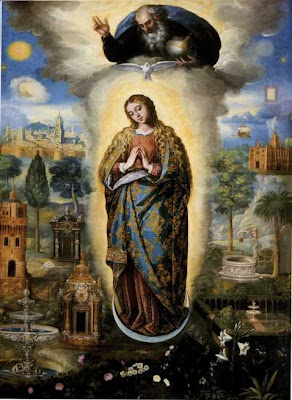 Today is the Solemnity of the Immaculate Conception and the titular feast of our Ottawa cathedral basilica, Notre-Dame de l'Immaculee-Conception.

The motto of the Archdiocese is "Trahe Nos, O Virgo Immaculata": "Draw Us, O Immaculate Virgin..." to your Son Jesus, who points us to the Father in the Holy Spirit.

The church that became our cathedral was originally dedicated to St. James (Saint-Jacques), as was Montreal's St. James Cathedral before Cardinal Paul-Emile Leger changed the patronage to "Mary Queen of the World"), reflecting great devotion to the senior of the Zebedee brothers.

In 1854, Pius IX solemnly proclaimed: “The most Blessed Virgin Mary, in the first instant of her conception, by a singular grace and privilege granted by almighty God, in view of the merits of Jesus Christ, the savior of the human race, was preserved free from all stain of original sin.”

It took a long time for this doctrine to develop. While many Fathers and Doctors of the Church considered Mary the greatest and holiest of the saints, they often had difficulty in seeing Mary as sinless—either at her conception or throughout her life.

This is one of the Church teachings that arose more from the piety of the faithful than from the insights of brilliant theologians. Even such champions of Mary as Bernard and Thomas Aquinas could not see theological justification for this teaching.

Two Franciscans, William of Ware and Blessed John Duns Scotus, helped develop the theology. They point out that Mary’s Immaculate Conception enhances Jesus’ redemptive work. Other members of the human race are cleansed from original sin after birth. In Mary, Jesus’ work was so powerful as to prevent original sin at the outset.

In Luke 1:28 the angel Gabriel, speaking on God’s behalf, addresses Mary as “full of grace” (or “highly favored”). In that context this phrase means that Mary is receiving all the special divine help necessary for the task ahead. However, the Church grows in understanding with the help of the Holy Spirit.

The Spirit led the Church, especially non-theologians, to the insight that Mary had to be the most perfect work of God next to the Incarnation. Or rather, Mary’s intimate association with the Incarnation called for the special involvement of God in Mary’s whole life.

The logic of piety helped God’s people to believe that Mary was full of grace and free of sin from the first moment of her existence. Moreover, this great privilege of Mary is the highlight of all that God has done in Jesus. Rightly understood, the incomparable holiness of Mary shows forth the incomparable goodness of God.

The Church Universal and Our Church of the Archdiocese of Ottawa have been blessed by many movements that have been inspired by the example of Our Blessed Mother, Mary Immaculate. One of these I wish to mention today: 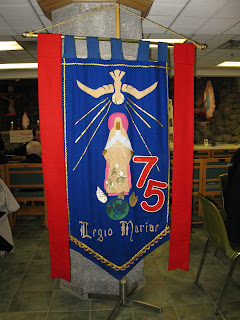 On Saturday, I joined representatives of the Legion of Mary in the Archdiocese who were marking 75 years of the presence of this Irish-founded movement among us. There was a concelebrated Mass of Thanksgiving in St. Patrick's Basilica at 11AM, followed by a luncheon in the parish hall afterwards. Some of the priests and Deacon James Scheer of St. Patrick's, who are spiritual advisors were able to be present for some or all of the festivities.

There was much joviality, good humour and joy (God's people know how to have fun!) Delegates came from far and wide, notably a bus from the Kingston Archdiocese, with legionaries from Brockville and Belleville.

The first praesidium was established in 1934 in St. Joseph's Parish by what might appear to have been a "chance" visit of Mary Duffy en route from New Brunswick to Toronto. But in the eyes of faith, nothing occurs by chance: indeed, we confess, God's providence is at work.

Here is an excerpt from the Ottawa Legion's website on their humble origins, drawn from an account written for the Diamond Jubilee in 1994:

If ever the saying; that "Great oaks from little acorns grow" were proven, it was in the humble way the first praesidium of the Legion of Mary was started in October 1934 in St. Joseph's Parish in Ottawa. It could almost be described as "accidental" because of the rapidity with which it got under way. But we know that in God's plan nothing is accidental, although the method is sometimes unusual.

And so it was God's plan that Mary Duffy, the first full-time Legion Envoy from Legion H. Q. in Dublin, came to Saint John, N. B., at the request of a Redemptorist priest, Father Tim O'Sullivan, and set up praesidia in that region.

From there she was to proceed to Toronto, and Father Tim suggested that she stop off in Ottawa en route. With only one day at her disposal for such a stop-over, Mary came to Ottawa, in early October 1934. She got into conversation with a priest at the train station, and who do you think it was? None other than Father Scannell, an Oblate priest just arriving from England for his assignment in St. Joseph's Parish. He suggested that she pay a visit to the Pastor there and gave her the address.

Mary dropped in to the church to say a prayer for guidance and, noticing the name "Father James Sullivan" on a confessional, said to herself': "Now that's a good name, I'll try him", and proceeded to the rectory. She was thrilled with Father Sullivan's reception and she had two pluses going for her. ( 1) She was promoting an organization devoted to Our blessed Lady and (2) she shared the same nationality, Father Sullivan having hailed from County Kerry himself.

On explaining that she had to go on to Toronto the next day, Father said he would get a group together that evening. There were fast phone calls to some devoted parishioners and Mary spoke to them that night. And that is the unheralded manner in which the first praesidium of the Legion of Mary (called Mary Immaculate) and actually the first in the Ottawa Archdiocese, saw its birth.

Mary Duffy went off to Toronto the next day, leaving the newborn praesidium to develop. The first President was Maye McEvoy and Father Sullivan was the spiritual director. We must remember that the lay apostolate was something almost unheard of at that time.

So it took more than a little courage for these first legionaries to make such a commitment and to start out on visitation of the parish - but do it they did! For two years they carried on their work quietly and unobtrusively, with wonderful results under the zealous direction of Father Sullivan. One early report showed that 13 persons under visitation returned to the Sacraments after absences ranging from 1 to 45 years.

In 1941 Father Sullivan was transferred to Vancouver, leaving a deep sadness in the hearts of the Ottawa legionaries on the loss of a very beloved spiritual director. Father Bradley was appointed to succeed him as Curia Spiritual Director, and was with us until November 1971, representing 30 years of devoted service to the Legion. We owe a debt of gratitude to Father Bradley, especially for his fidelity to the monthly Curia meetings and his down-to-earth Allocutios, always oriented to the training of legionaries.

Today we salute the memory of those first legionaries in Ottawa, at the same time saluting the present members of "Mary Immaculate" Praesidium, who are carrying on the Legion work in St. Joseph's in the same dedicated spirit. 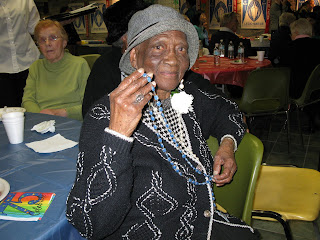 This member of the Ottawa Legion of Mary, Dorothy Harris, has 77 years of membership to her credit, having joined in London, England (where she had gone from Jamaica) at the age of 16 [she is now 93!] 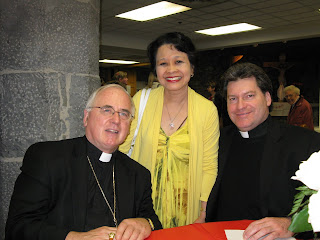 What began in 1934 with a few parishioners gathering with a stranger on the encouragement of their pastor has grown to 21 praesidia. Noteworthy is Our Lady of Victory prasidium at St. Patrick's Basilica Parish marking 70 years and the newest praesidium begun this year, Our Lady of Guadalupe at Good Shepherd Parish, Blackburn Hamlet.

Herewith a few other photos taken on Saturday (a hat tip to Jennifer Snell for these photos, as I forget to return my memory card to the camera I took along for the occasion). 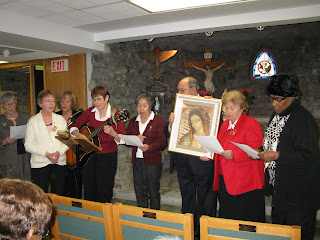 Members of Our Lady of Guadalupe Praesidium, Blackburn Hamlet, sing at the Saturday gathering in The Scavi at St. Patrick's Basilica 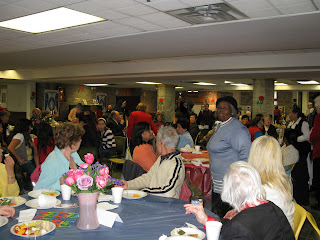 Posted by Archbishop Terry at 6:24 AM