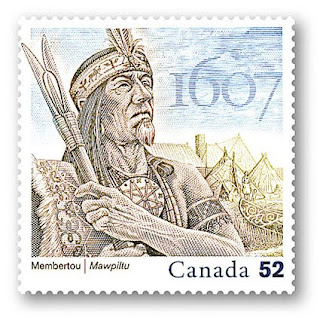 In 2007, Canada Post produced a stamp honouring Grand Chief Membertou of the Mi'kmaq People on the 400th anniversary of bonds of friendship being established between the aboriginals of Nova Scotia and the French settlers at Port Royal. Next year, there will be celebrations of the 400th anniversary of the baptism of Membertou (and his people). Here is a description of this bond on the website of Multicultural Trails of NS:

Grand Chief Henri Membertou led a group of Mi’kmaq who hunted and fished in the area encompassing a basin of water, which in 1604, the French named Port Royal and known today as Annapolis Basin. Membertou was a great leader in his district, and had a tremendous following. He was Grand Chief of the Grand Council of the Mi’kmaq, and was very respected by all.

It is said he went out, in season, to lead his followers in battle against the Mi’kmaq’s ancient enemies to the south (present day Maine), the Armouchiquois. The French were later to fight the Armouchiquois, a turn of events which is undoubtedly one of the reasons why Membertou "showed an unswerving loyalty" towards his French allies.

He expressed his faithfulness to the French by allowing himself to be baptized into the Roman Catholic Church in 1610. He died the following year on September 18th, 1611. Both Mi’kmaq and French paid tribute to him in a solemn funeral.

He was so influential a figure in Mi’kmaw society that within the next fifty years many, if not most, Mi’kmaq had also converted to Christianity.

A monument was erected at Port Royal in 1985 to mark the 375th anniversary of the baptism of Membertou and his family into the Catholic faith in 1610.

The anniversary of Membertou's conversion to Christ and baptism is the theme of this year's address by the President of the Canadian Conference of Catholic Bishops for today's National Day of Prayer for Aboriginal Peoples, which coincides with the feast of Our Lady of Guadalupe:

400TH ANNIVERSARY OF THE BAPTISM OF MEMBERTOU 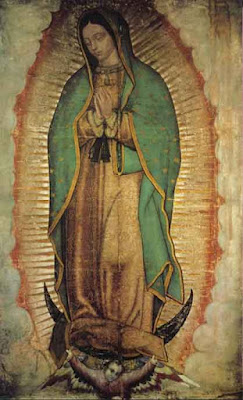 As recommended by what is now the Canadian Catholic Aboriginal Catholic, December 12 has been designated “National Day of Prayer for Aboriginal Peoples”. The date was not chosen by chance, for it is the Feast of Our Lady of Guadalupe, Patroness of the Americas. This is a feast that reminds us the message of salvation is for all humanity.

With preparations well underway to commemorate the 400th anniversary of the Baptism of the Mi’kmaq Grand Chief Membertou in 1610, the Bishops of Canada join Aboriginal Catholics in remembering this historic event. It is also an occasion to recall the teaching of Christ to “make disciples of all nations, baptizing them in the name of the Father and of the Son and of the Holy Spirit” (Matthew 28.19).

In keeping with the spirit of the April 29, 2009 meeting between Pope Benedict XVI and representatives from Aboriginal communities in Canada, the commemoration of the Baptism of Chief Membertou serves as an opportunity to renew and strengthen our common bonds of faith, reconciliation and trust with Aboriginal Catholics.

Pope John Paul II reminded us that “not only is Christianity relevant to the Indian people, but Christ, in the members of his Body, is himself Indian” (Address at the Shrine of the Canadian Martyrs, 15 September 1984). The National Day of Prayer for Aboriginal Peoples is an invitation to all Catholics across the country to be united with their Aboriginal brothers and sisters in prayer and in witness that “we were all baptized by one Spirit into one body” (1 Corinthians 12.13).

A couple of days ago, I met with Jeff Nelson and his wife Janet as we look forward to his ordination as a Permanent Deacon in the Archdiocese of Ottawa on Holy Family Sunday, December 27 at St. Theresa's Church, Ottawa.

Please pray for Jeff, his family and his parish as this milestone in his faith journey approaches.

After our meeting, a staffer took our picture: 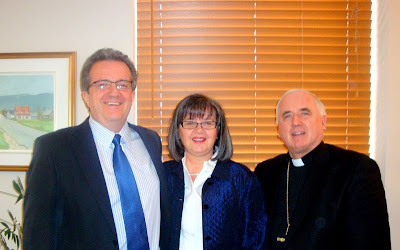 Posted by Archbishop Terry at 6:37 AM