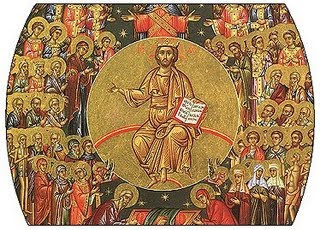 
"O KING of the nations, and their desire,
the cornerstone making both one:
Come and save the human race,
which you fashioned from clay."

O King of our desire whom we despise,
King of the nations never on the throne,
Unfound foundation, cast-off cornerstone,
Rejected joiner, making many one,
You have no form or beauty for our eyes,
A King who comes to give away his crown,
A King within our rags of flesh and bone.
We pierce the flesh that pierces our disguise,
For we ourselves are found in you alone.
Come to us now and find in us your throne,
O King within the child within the clay,
O hidden King who shapes us in the play
Of all creation. Shape us for the day
Your coming Kingdom comes into its own.

On Sunday, I drove out to the Correctional Centre for Mass and an exchange with the prisoners who wished to attend that day's worship.

A maximum of twenty may attend and eighteen volunteered to come: most English-speaking but a few francophones, so that we used hymns from the Catholic Book of Worship II that allowed us to go back and forth from English to French. One of the readings was done in French.

In conversation before the Eucharist began, I mentioned that I would be receiving visitors at my home in the afternoon and, as they couldn't get a pass for the occasion, I came to visit them. [Photos of the Open House will be posted with tomorrow's blog entry; in respect of privacy and security, no photographs may be taken inside the prison, so we are limited today to exterior shots.]

Christmas is, after all, about God visiting his people, particularly the poor and marginal (the shepherds) and the ministry of Jesus was to proclaim recovery of sight to the blind, a year of release and liberty for captives (which they could relate to).

The prayers of the faithful were touching, particularly as the men were aware of how their absence from their children at Christmas would be difficult for them and their families. After Mass, we shared a question and answer session, as I find many people love to bring out questions of faith that interest, even trouble them. I left our time together, grateful for the fine work our priests, deacons and lay people do in regularly visiting those in detention and touched by the mutual pledge we made of praying for each other at this time that can be difficult but also spiritually uplifting. 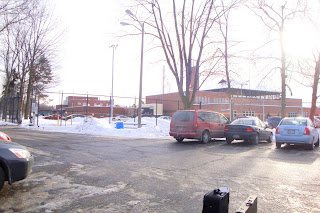 After three years in Ottawa, serving as curate at St. Clement's and studying for a licentiate in Canon Law at St. Paul's University, the Superior of the Priestly Fraternity of St. Peter has given Father Joseph Lee a new assignment on the staff of the congregation's seminary in Kansas.

Sunday noon, a farewell indoor winter barbecue was held to send him from the realm of ice and snow to "Tornado Alley". I dropped in briefly on the festivities on my way home from the jail and en route to the "Portes ouvertes".

All the best back in the 'States, Fr. Lee! 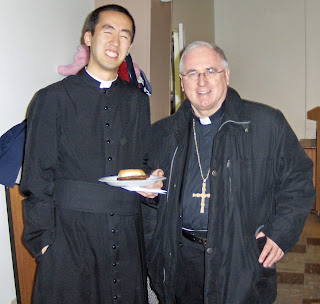 The Pope's Bold Reflection on Evangelization.... 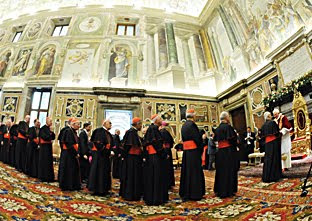 On Monday, the Pope exchanged greetings for Christmas and New Year's with his collaborators

Yesterday, as Abbe Daniel Berniquez and I drove out to Saint-Isidore-de-Prescott for a Memorial Mass for the late Abbe Charles Clement, after a bit of time praying from the breviary I began to translate for him, from an item of day's the Vatican Information Service from Italian into French, the Holy Father's address that morning to Cardinals resident in Rome and officials of the Roman Curia who assist him in his governance of the Universal Church.

These pre-Christmas addresses recap the year ending, but often send signals of the Pope's thinking on issues that arise from his ministry and are suggestive of new directions to be contemplated. This year's talk did not disappoint.

There was a review of his trips to the Holy Land (Israel and Jordan) and of God's saving interventions there in history.

There was a strong emphasis on his trip to Africa (Cameroon and Angola) and on the subsequent Special Synod of Bishops on Africa. Indeed, this was the Church's year to focus on the African continent, its challenges, possibilities and real needs for reconciliation, justice and peace.

Finally, mention was made of his trip to the Czech Republic where a majority now declare themselves to be agnostics, even atheists. From this experience, the Pope's thought moved to an analogy from the Jerusalem Temple where the Gentile peoples of the world, not belonging to the the chosen people of Israel, yet found a place to worship God in their own imperfect way.

Which led the Holy Father to wonder whether a contemporary feature of the worship of believers could allow for a space (like the Court of the Gentiles represented) where those of good will might search for God, the One Unknown to them except in their desire for the good, the true, the beautiful.

Above all, he suggested believers must work so that people do not put aside that interior quest which lies at the core of their beings, namely one for God even if not acknowledged as such. While we let ourselves imagine what this might mean for our task of carrying on the new evangelization, here for consideration is part of what Pope Benedict said:

Even the people who describe themselves as agnostics or atheists must be very important to us as believers. When we talk about a new evangelization, these people may become afraid. They do not want to see themselves as an object of mission, nor do they want to renounce their freedom of thought or of will. But the question about God nonetheless remains present for them as well, even if they cannot believe in the concrete nature of his attention to us.

In Paris, I talked about the search for God as the fundamental motive from which Western monasticism was born, and with it, Western culture. As the first step in evangelization, we must try to keep this search alive; we must take pains that man not set aside the question of God as an essential question of his existence. Take pains that he accept this question and the longing concealed within it.

Here I am reminded of the words that Jesus quoted from the prophet Isaiah, that the temple should be a house of prayer for all peoples (cf. Isaiah 56:7; Mark 11:17). He was thinking about what was called the court of the gentiles, which he cleansed of extraneous business so that it could be the space available for the gentiles who wanted to pray to the one God there, even if they could not take part in the mystery, for service of which the interior of the temple was reserved.

A place of prayer for all peoples: by this was meant the people who know God, so to speak, only from afar; who are dissatisfied with their gods, rites, myths; who desire the Pure and the Great, even if God remains for them the "unknown God" (cf. Acts 17:23). They needed to be able to pray to the unknown God, and so be in relation with the true God, although in the midst of obscurities of various kinds.

I think that the Church should also open today a sort of "court of the gentiles" where men can in some manner cling to God, without knowing him and before they have found the entryway to his mystery, which the interior life of the Church serves. To the dialogue with the religions it must above all add today a dialogue with those for whom religion is something foreign, to whom God is unknown, and who nonetheless would not like simply to remain without God, but at least to approach him as the Unknown.
Posted by Archbishop Terry at 6:23 AM