A recent phenomenon among Catholic young men across Canada is the establishment of households (in Halifax, Toronto, Saskatoon, Vancouver--in addition to Ottawa) devoted to living in a godly way their faith, inspired by the example of Blessed Pier Giorgio Frassati whom Pope John Paul II called the "man of the eight beatitudes".

The ideals Frassati represents may be gauged by the descriptions of him in the litany that follows. His relics and a display on his life were present in Sydney, Australia at the World Youth Day in 2008 as an encouragement to youth from around the world.

A fun-loving geology student who wished to draw his friends closer to Our Lord and His Blessed Mother, with whom he had entered into deep spiritual communion, Frassati climbed mountains, took part in battles for justice and cared deeply for the poor. Scion of a wealthy and secularized family, he befriended the poor who came out in great numbers for the funeral following his death at age 24.

The households are real beacons of light with men residents who go about their studies or work while striving to be manly disciples of Christ.

One of my great joys in Halifax was the founding of a Frassati House on South Park Street that is now in its sixth year. Though the original four men have graduated and gone of to a variety of careers, studies and even missionary work with CCO, each year the household is reconstituted with some returning and others moving on.

There had been a Frassati household in Ottawa in recent years, but it disbanded when one of the major players married last summer. However, another fledgling band has taken up the Frassati spiritual cause, renting a house on Prince of Wales Drive.

They invited me for Mass and supper on Wednesday evening, whose start was delayed a bit by the first winter storm to hit the Capital (20 cm of the white stuff!) Following the Eucharist, we shared rich conversations for the next couple of hours over a delicious home-cooked (meat and potatoes) supper.

On departure, I thanked them for the corporate witness they are giving and assured them of my prayers and best wishes. 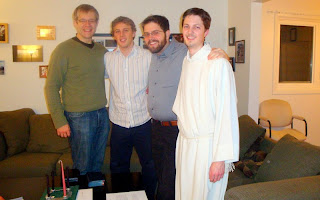 The Litany of Pier Giorgio Frassati (for private devotion) 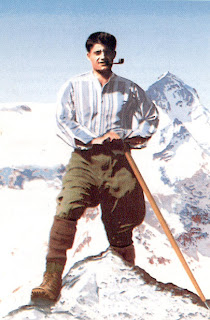 Blessed Pier Giorgio, pray for us. (Repeat after each invocation.)
Loving son and brother,
Support of family life,
Friend of the friendless,
Most Christian of companions,
Leader of youth,
Helper of those in need,
Teacher of charity,
Patron of the poor,
Comfort of the sick,
Athlete for God’s kingdom,
Conqueror of life’s mountains,
Defender of truth and virtue,
Opponent of every injustice,
Patriotic citizen of the nation,
Loyal son of the Church,
Devoted child of the Madonna,
Ardent adorer of the Eucharist,
Fervent student of the Scriptures,
Dedicated follower of St. Dominic,
Apostle of prayer and fasting,
Guide to a deep love for Jesus,
Diligent in work and study,
Joyful in all of life’s circumstances,
Strong in safeguarding chastity,
Silent in pain and suffering,
Faithful to the promises of Baptism,
Model of humility,
Example of detachment,
Mirror of obedience,
Man of the Beatitudes,

Pray for us, Blessed Pier Giorgio Frassati,
That we may be made worthy of the promises of Christ.

Let us pray: Father, You gave to the young Pier Giorgio Frassati the joy of meeting Christ and of living his faith in service of the poor and the sick. Through his intercession, may we, too, walk the path of the Beatitudes and follow the example of his generosity, spreading the spirit of the Gospel in society. We ask this through Christ our Lord. Amen. [IMPRIMATUR, November 2, 1994: +Joseph A. Galante, D.D., J.C.D., Bishop of Beaumont, TX]

My participation this morning in Fr. Bill Lunney's funeral at Pakenham means I had to bow out of attending a ceremony marking the accession by St. Paul's University Library of its 500,000 volume (my gift last fall of Pope Benedict's gift of reproductions of ancient papyri of New Testament texts) and the dedication of Foyer A.-V. Paradis. Instead, I sent a note for the occasion.

The library began with four books and now has grown into an extraordinary research (not a lending) library, mainly in theological and philosophical sciences. A visiting doctoral student told me he was amazed so much was readily available when he was looking for works in his field.

Congratulations to St. Paul's University and its library on this milestone! 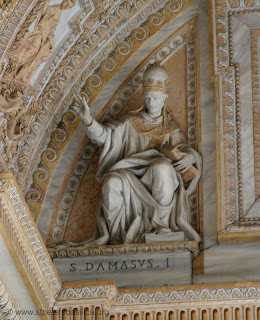 "He who walking on the sea could calm the bitter waves, who gives life to the dying seeds of the earth; he who was able to loose the mortal chains of death, and after three days' darkness could bring again to the upper world the brother for his sister Martha: he, I believe, will make Damasus rise again from the dust" (epitaph Damasus wrote for himself).

To his secretary St. Jerome, Damasus was “an incomparable person, learned in the Scriptures, a virgin doctor of the virgin Church, who loved chastity and heard its praises with pleasure.”

Damasus seldom heard such unrestrained praise. Internal political struggles, doctrinal heresies, uneasy relations with his fellow bishops and those of the Eastern Church marred the peace of his pontificate.

The son of a Roman priest, possibly of Spanish extraction, Damasus started as a deacon in his father’s church, and served as a priest in what later became the basilica of San Lorenzo in Rome. He served Pope Liberius (352-366) and followed him into exile.

When Liberius died, Damasus was elected bishop of Rome; but a minority elected and consecrated another deacon, Ursinus, as pope. The controversy between Damasus and the antipope resulted in violent battles in two basilicas, scandalizing the bishops of Italy. At the synod Damasus called on the occasion of his birthday, he asked them to approve his actions. The bishops’ reply was curt: “We assembled for a birthday, not to condemn a man unheard.”

Supporters of the antipope even managed to get Damasus accused of a grave crime—probably sexual—as late as A.D. 378. He had to clear himself before both a civil court and a Church synod.

As pope his lifestyle was simple in contrast to other ecclesiastics of Rome, and he was fierce in his denunciation of Arianism and other heresies. A misunderstanding of the Trinitarian terminology used by Rome threatened amicable relations with the Eastern Church, and Damasus was only moderately successful in dealing with the situation.

During his pontificate Christianity was declared the official religion of the Roman state (380), and Latin became the principal liturgical language as part of the pope’s reforms. His encouragement of St. Jerome’s biblical studies led to the Vulgate, the Latin translation of Scripture which the Council of Trent (12 centuries later) declared to be “authentic in public readings, disputations, preachings.”

The history of the papacy and the Church is inextricably mixed with the personal biography of Damasus. In a troubled and pivotal period of Church history, he stands forth as a zealous defender of the faith who knew when to be progressive and when to entrench.

Damasus makes us aware of two qualities of good leadership: alertness to the promptings of the Spirit and service. His struggles are a reminder that Jesus never promised his Rock protection from hurricane winds nor his followers immunity from difficulties. His only guarantee is final victory.