St. Stephen, the Deacon and Protomartyr - Visitors of the Season 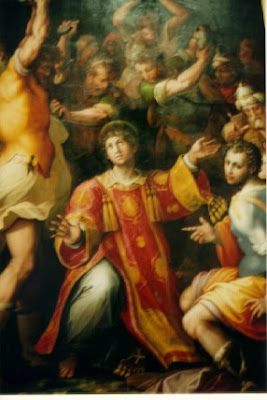 St. Stephen, the first martyr (if we don't count the Holy Innocents on December 28) is one of several patrons of our permanent deacons (with St. Vincent [January 22], St. Ephrem [June 9] and St. Lawrence [August 10]) is also the patron of bricklayers and of Hungary.

What we know of Stephen is found in chapters six and seven of the Acts of the Apostles. From this account, we learn what kind of man he was:

At that time, as the number of disciples continued to grow, the Hellenist (Greek-speaking) Christians complained about the Hebrew-speaking Christians, saying that their widows were being neglected in the daily distribution. So the Twelve called together the community of the disciples and said, “It is not right for us to neglect the word of God to serve at table. Brothers, select from among you seven reputable men, filled with the Spirit and wisdom, whom we shall appoint to this task, whereas we shall devote ourselves to prayer and to the ministry of the word.” The proposal was acceptable to the whole community, so they chose Stephen, a man filled with faith and the Holy Spirit.... (Acts 6:1-5)

Acts says that Stephen was a man filled with grace and power, who worked great wonders among the people. Certain Jews, members of the Synagogue of Roman Freedmen, debated with Stephen but proved no match for the wisdom and spirit with which he spoke. They persuaded others to make the charge of blasphemy against him, which led to his being seized and taken before the Sanhedrin.

In his speech, Stephen recalled God’s guidance through Israel’s history, as well as Israel’s idolatry and disobedience. He then claimed that his persecutors were showing this same spirit. “[Y]ou always oppose the holy Spirit; you are just like your ancestors” (Acts 7:51b).

His speech brought anger from the crowd. “But [Stephen], filled with the holy Spirit, looked up intently to heaven and saw the glory of God and Jesus standing at the right hand of God, and he said, ‘Behold, I see the heavens opened and the Son of Man standing at the right hand of God....’ They threw him out of the city, and began to stone him....As they were stoning Stephen, he called out, ‘Lord Jesus, receive my spirit....Lord, do not hold this sin against them’” (Acts 7:55-56, 58a, 59, 60b).

Stephen died as Jesus did: falsely accused, brought to unjust condemnation because he spoke the truth fearlessly. He died with his eyes trustfully fixed on God, and with a prayer of forgiveness on his lips.

In Luke's gospel, Jesus entrusted his Spirit into the Father's hands; in Acts, Stephen gave his spirit to the Lord Jesus, whose Spirit is given to disciples at their arraignment, according to His promise (Luke 12:11-12).

A “happy” death is one that finds us in the same spirit, whether our dying is as quiet as Joseph’s or as violent as Stephen’s: dying with courage, total trust and forgiving love.

HOSPITALITY OF THE CHRISTMAS SEASON...

...the season is wonderful for being received and for receiving visitors, among them bishops, priests of the Cathedral and Residence, the Sisters of Sainte-Marie de Namur our neighbours on Parent Avenue, the seminarians on home visits and those contemplating the priesthood through the Quo Vadis? program directed by Fr. Tim McCauley, director of vocations and his advisors. Herewith some recent photos:

Being received by the retired priests' community... 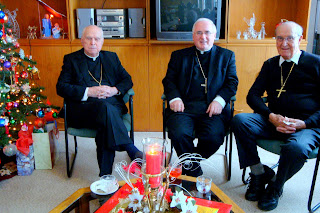 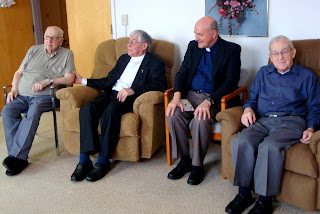 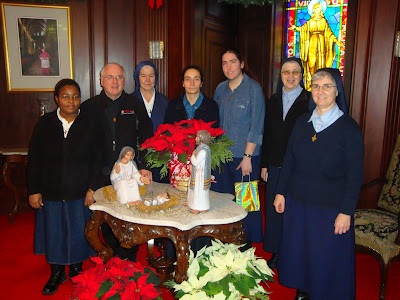 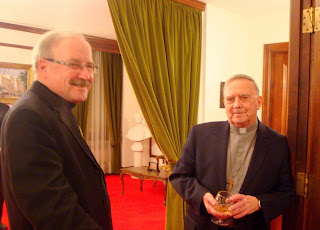 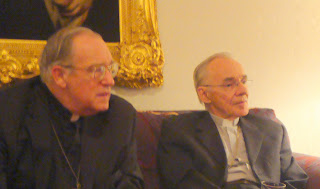 ...the priests of the house and Cathedral Basilica parish 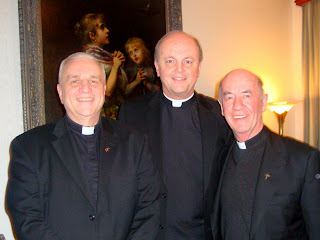 ...seminarians and those discerning a call to priesthood 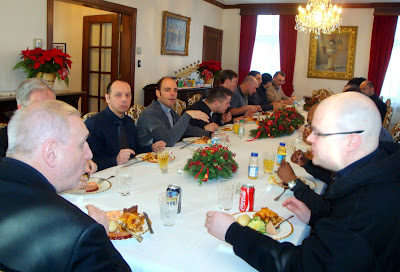 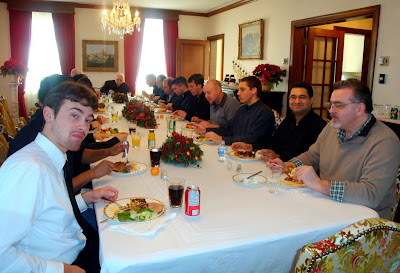 Blessed Christmastide to one and all!
Posted by Archbishop Terry at 7:15 AM