"O Wisdom" - Messiah at the NAC - CNEWA Board Meeting, NYC 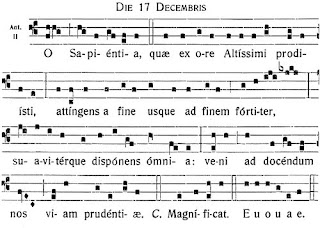 "O WISDOM, coming forth from the mouth of the Most High,
reaching from one end to the other mightily,
and sweetly ordering all things:
Come and teach us the way of prudence."

With my schedule, it's often difficult for me to get to enjoy some of the many artistic and cultural events in Ottawa, particularly at the National Arts Centre, a short walk from home (longer in the snow!)

So, recently when disappointed at the box office to discover that a performance I had wanted to attend was sold out, I resolved there and then to purchase tickets to Messiah during the days leading to Christmas. Thus, Msgr. LoRusso from the nunciature and I joined a nearly full house for Trevor Pinnock's conducting of Handel's famous oratorio (originally performed for the Easter Season but quite apt, too, for Advent and Christmas.

There were several friends, religious and lay in attendance as may be seen in the following pix: 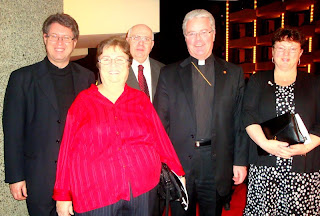 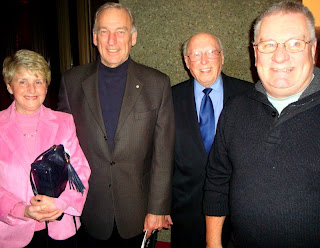 There were only two performances and my choice of date was not entirely felicitous as a meeting scheduled for New York City on Wednesday (December 16) necessitated a four AM rise to make the Air Canada 6:10 flight to New York's LaGuardia airport to attend the Annual Board Meeting of CNEWA, on which Cardinal Marc Ouellet and I serve. 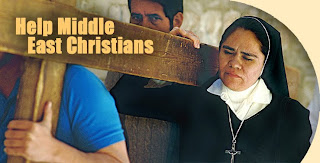 This is from the CNEWA web site: Who We Are

Amidst the upheavals and challenges of the modern world, CNEWA (Catholic Near East Welfare Association) has been a lifeline for those in need throughout the Middle East, Northeast Africa, India and Eastern Europe for more than 75 years.

 to support the pastoral mission and institutions of the Eastern Catholic churches.

 to provide humanitarian assistance to those in need without regard to nationality or creed.

 to promote Christian unity and interreligious understanding and collaboration.

 to educate people in the West about the history, cultures, peoples and churches of the East. 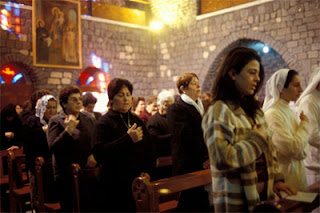 CNEWA does not have inflexible priorities – they are set based upon time, place and urgency of need. We do not compete; if other agencies are doing a good work, we leave it to them. CNEWA addresses those needs that would otherwise “fall through the cracks,” enabling the power of love to reach men, women and children in need.

From training priests to serve the people of God in India to providing clean water systems to war-damaged villages in Lebanon – from providing job opportunities to unemployed Palestinians to caring for orphaned children in Ethiopia – from providing health care to the poor in Iraq to awarding scholarships for Orthodox priests to study in Catholic universities in Rome, CNEWA connects generous North Americans with those in need living in some of the remotest parts of the world.

The agency publishes a bimonthly magazine, ONE. Its name identifies the real spirit of CNEWA and its work – it is about one God, one world, one family and one church. Operationally, CNEWA’s charism is always to act as if we are all one, unless we are forced to encounter a difference. 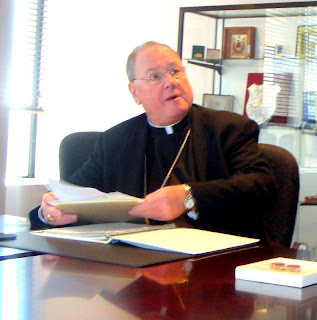 Ex officio, the Archbishop of New York is President of CNEWA and Chair of the Board of Directors (Cardinal William Keeler, emeritus archbishop of Baltimore; Archbishop Alex Brunette of Seattle, along with the two Canadians make up the Board).

Cardinal Ouellet and Archbishop Brunette took part in the meeting by conference call. As he had been named Archbishop of New York after last December's meeting, this was the first session at which Archbishop Timothy Dolan presided and he charmed us all as he has been doing all of the "Big Apple" since his arrival.

The day-to-day operations of CNEWA (CNEWA USA and CNEWA Canada, and perhaps soon CNEWA Australia and/or CNEWA Italia) have been directed in exemplary fashion for the last 22 years by Msgr. Robert Stern, assisted by a staff of fifty on the fifteenth floor of the 20-storey Archdiocese of New York's Office Building (the Cardinal Terence J. Cooke Center). On the ground level there is a modern parish church (photos on a future blog entry) and Cathedral High School: a Catholic edifice in the heart of Manhattan.

Here are some photos of the CNEWA staff (the last shot in the ninth floor cafeteria): 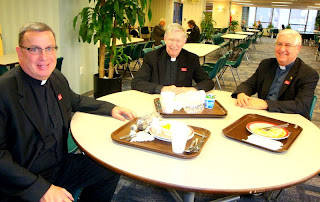 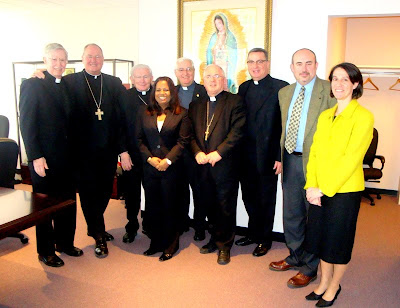 Members of the Board with some of the wonderful staff that helps carry out CNEWA's mission
Posted by Archbishop Terry at 6:45 AM