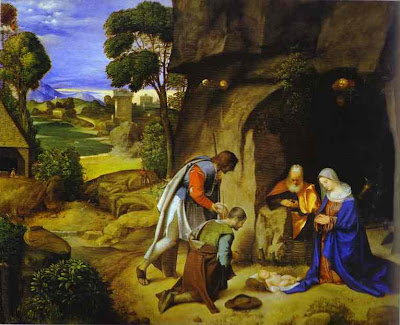 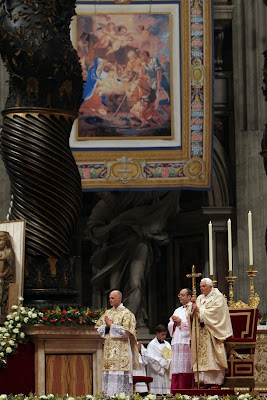 Among those serving at the high altar with His Holiness Pope Benedict XVI at St. Peter's Vatican Basilica for the Midnight Christmas Mass last evening was a young Canadian Jesuit, John Meehan seen wearing the dalmatic in the photo.

Originally from Antigonish, NS, John is a professionally-trained historian who has been doing research at various archives in Rome for the past semester.

His parents joined him for Christmas in the Eternal City and he was thrilled to have been chosen to be one of four deacons assisting at the papal liturgy. I will have the honour of presiding at John's [and his colleague Teofilo Ugaban 's] priestly ordination in Toronto on June 5 next.

While rejoicing in Christmas, I was saddened to learn of the death on Christmas Eve of my dear friend Father Basil Carew (at right in photo below), priest of the Archdiocese of Halifax. Father Bas had suffered from ALS (Lou Gehrig's Disease) for the last several years. I was able to be in touch with him by email a few weeks ago (he was unable to speak in recent months) and was delighted when he was able to send a few sentences in reply to my missive. 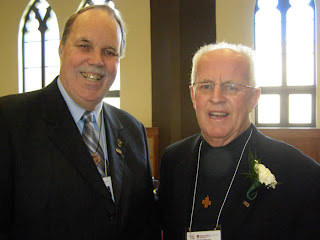 An avid liturgist, skilled counsellor and sparkling personality, Fr. Bas often referred with delight to the 1978 fall semester we lived together at St. Andrew's Glebe in Eastern Passage when both of us were teaching at Atlantic School of Theology.

Father Bas was predeceased on Easter Day by our good friend George Leach, S.J., pictured at left in the photograph taken at a ceremony held in recent years at Saint Mary's University on the occasion of their both being recognized for their athletic prowess at SMU in the 1950s. 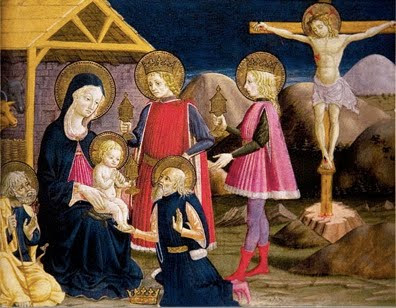 This painting of the Nativity, with Christ Crucified present, illustrates how the joy and sorrow of the Paschal Mystery are present at every stage of the Incarnation
Posted by Archbishop Terry at 6:55 AM