St. John of the Cross - Thanksgiving Mass at Cyrville - Christmas Concert and Farewell to Msgr Powers 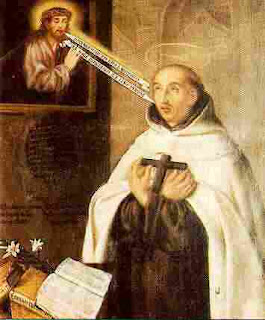 Today's Mass features the liturgical memorial of Saint John of the Cross, a mystical teacher (doctor) of the church.

His writings on the soul united with God in prayer reveal the most profound mystical expressions, experiences and insights ever imagined. They are for those precise reasons often misunderstood or misinterpreted unless one has a wise spiritual director who is experienced in contemplative prayer and well versed in mystical and ascetical theology.

This Carmelite saint's writings are the most profound, literary masterpieces both in his gorgeous prose and poetry. "As a poet St. John of the Cross ranks with the greatest. Many literary critics consider him Spain's greatest lyric poet. He was a supremely great artist, endowed with a full measure of natural skill." (E. Allison Peers, The Tablet, July 4, 1942, p 6.) (source: Rengers)

The writings of Juan de Yepes, his example and witness to the gospels are all extraordinary. He understood the mystery of God in Jesus Christ as far as it is humanly possible, lived it in intimate union with God and his Mother and wrote that mystery as it pertains to prayer life and the expression of God's charity in word and actions toward others.

John's appeal and gifts are for the universal church and for all creatures who seek union with God in prayer and action. God poured his Spirit in him quite abundantly. John is a master and a marvel beyond description when it comes to the imitation of Christ. He lived a thoroughly, holy, prayerful life and expressed it with generous, Christian words and actions.

God leads us, generally, through the visible rather than the invisible. No better guide than the mystical doctor will you ever find. However, this saint is so subtle and profound that he is often misunderstood and misinterpreted. St John will marvelously lead you, usually, through someone else. John relied on others and allowed himself to be recruited by Teresa of Avila in her reform of Carmel. She sensed in him a holiness and wisdom that would help her in the renewal of the Order of the Virgin, especially with the men. John was one of the original founders of the new order that God inspired St Teresa to initiate and played a vital role in many important offices that he held.

All Christians, no matter the division or denomination, have union with God if they possess charity. Charity is the life of love. It is the life of God. To be charitable is to be a Christian. There are many forms of love but the noblest is the love that shares, gives unstintingly and unreservedly. The Greek word for this love is called Agape. It is pure and perfect. It becomes transforming love when it is sacrificial for helping others at great cost to oneself.

Jesus said it best: greater love than this no one has than to lay down one's very life for others-even if they are enemies or friends. Jesus wanted all to be his friends. This included his traitor, Judas. In Gethsemane, on the night of his arrest, he asked: Judas, have you come to betray me with a kiss? He did not shrink from being kissed by Judas to show that he desires all to approach him confidently if we can. Jesus is tenderly approachable to transform us. We can be sure that Jesus kissed his friends and love ones more frequently than is recorded in the gospels. Other books by reputable holy people also mentioned that Jesus shed more tears than the few occasions mentioned in scripture.

God may prefer to guide you by the Father, Son or Holy Spirit. Frequently God uses his Mother, Mary. God leads most of us through the church.

Some of his books include:

The Ascent of Mt. Carmel,
The Dark Night,
The Living Flame of Love
and The Spiritual Canticle.

John was criticized, deprived, beaten, berated and even imprisoned by the Carmelite Order he so earnestly hoped to help. He is perhaps the most misunderstood doctor of the church precisely because he is the most mystical. The signs, signals and proof of God's overwhelming endorsement of St John of Cross to aid us are too many to conceive. John's union with God was total and thorough.

The mystical doctor was quite ordinary, natural and down to earth. His virtues, gifts and holiness were extra-ordinary. His natural gifts were shown to become supernaturalized both in life and death. For example, after John’s death not even lime would destroy his bones. There was a deliberate attempt to hasten the decompositon of his bodily remains for specific reasons. However, John's purity, innocence and love of God exceeded all natural causes and God has perserved his remains even to this day. He is an exceptional incorruptible.

When it comes to the mystical life, everything is summed up by the "Beloved Apostle", St John the Evangelist, when he stated that God is Love. The "Mystical Doctor" added a dimension by saying that Love is repaid by Love alone and again: Love is only repaid by Love. The emphasis here is that the Spirit of God within the Deity and within humans, as God's bounty and gifts allow, is the same Spirit. God alone repays Himself according to God's infinite wisdom in time and eternity.

The providence of the Father allowed him to be kidnapped and kept locked up away from his monastery. He understood and accepted. Those parents with missing children, those who have love ones kidnapped or relatives who are separated have a commiserate friend they can identify and turn to with John of the Cross. He lived that desolation, isolation and separation.

His intercessory powers were most extraordinary. John keenly sensed the separation of human and divine love. He was especially aware of the rarest intimacy of Jesus. John's fruits came from grace and long practice of holy prayer and sacrifice and included: charity, joy, peace, patience, longanimity, goodness, benignity, mildness, faith, modesty, confinency, and chastity.

In the restructuring of the Parishes of Vanier, the Church of NDame de Lourdes (Cyrville), now surrounded by shopping centres and commercial establishments and cut in two by the Queensway (Highway 417), is slated to close on December 27 after the 11:30 AM Sunday Mass.

Yesterday, Gaudete Sunday, I presided at a concelebrated Mass of Thanksgiving for all the blessings received in this church since 1872.

It was a bitter-sweet occasion and the theme of Rejoicing was rather subdued. Still, a good 100+ of the faithful came for Mass and the reception in the basement parish hall afterwards.

Most told me they have already settled on the church they will soon begin attending (St. Gabriel in Gloucester or the nearby St. Louis de Montfort or St. Sebastien parishes). 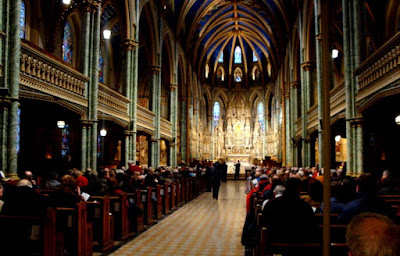 Notre Dame Cathedral Basilica was full for the annual mid-December concert of carols and hymns with Advent themes (part one) and Christmas anthems (part two).

Towards the end, Father Paul McKeown, osm, Rector-designate guided a short period of testimonies in grateful recognition for the leadership of Msgr. Patrick Powers over the past four and a third years. In January he will prepare to assume the post of General Secretary of the Canadian Conference of Catholic Bishops.

A reception followed in the parish hall, from which the following shots were chosen: 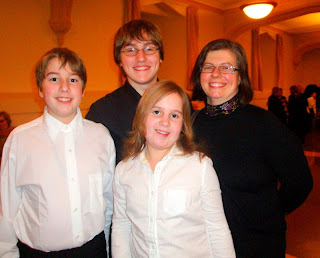 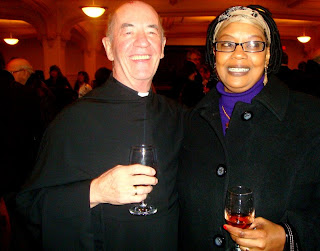 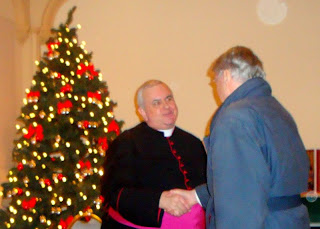 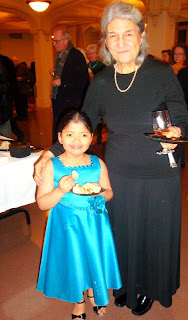 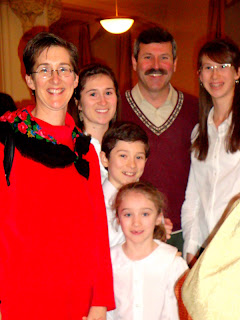 Posted by Archbishop Terry at 6:22 AM