Today there is an optional memorial of St. John of Damascus, doctor of the church.

He is famous in three areas:

First, he is known for his writings against the iconoclasts, who opposed the veneration of images. Paradoxically, it was the Eastern Christian emperor Leo who forbade the practice, and it was because John lived in Muslim territory that his enemies could not silence him.

Second, he is famous for his treatise, Exposition of the Orthodox Faith, a summary of the Greek Fathers (of which he became the last). It is said that this book is for Eastern schools what the Summa of Aquinas became for the West.

Thirdly, he is known as a poet, one of the two greatest of the Eastern Church, the other being Romanus the Melodist. His devotion to the Blessed Mother and his sermons on her feasts are well known.

The charms of small towns

When the Bishop's Visitation takes place, the primary intent is that he get to know the people and their concerns, the struggles facing the parish communities, the challenges in handing on the faith, where a particular parish has come from, what the people are worried about now, what their questions are.

However, one also gets to know the sobriquets of local origin, for example that the Town of Alfred was first known as Bradyville (because of the owner of a hotel), then was named after one of the sons of King George III who died as a child (Prince Alfred) and that more recently it claims to be the "French Fry Capital of Canada":

Of course, on asking why we were told that there are four or five shops (depending on the time of year--some close in the winter months) serving the locals and well-informed folk who pass through town on the way to Ottawa or Montreal and points in between (former Prime Minister Jean Chretien was said to frequent the chip stands).

Naturally, Abbe Titus and I had to sample the offerings at Landriault's (who cook their fries in peanut oil, which some favour): 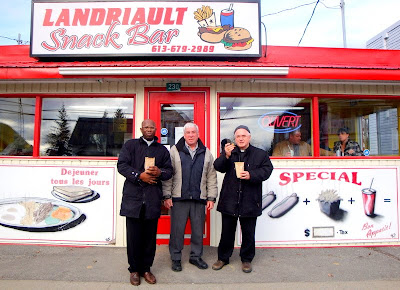 The blog about bogs

Earlier readers will recall in the blog about La Mer Bleu, a bog near Orleans, that we mentioned that the Alfred Bog was twice its size.

However, it's harder to get at. With Abbe Daniel Berniquez driving on Friday afternoon we did not know what to look for and there were no markers to the bog on the east side of town, beyond "Peat Moss Road". We gave up in frustration as darkness fell over the landscape.

However, one of the two permanent deacons in Alfred, Andre Pommainville is a retired agronomist who knows his way around the countryside (the other deacon Real Lalonde works at the local LCBO so gets to know much about the social side of life in town).

On Sunday morning, after the Mass in Lefaivre, Deacon Andre volunteered to show Abbe Titus and me the extensive dimensions of the bog (where the black earth is being prepared for shipment to greenhouses in the Toronto and Montreal areas, how turf is grown for lawns in suburbia, etc).

He also led us to the boardwalk in the bog, much less extensive than La Mer Bleu but restful as we gazed at a vast expanse of vegetation: 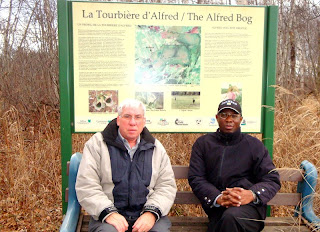 WHAT IS THE ALFRED BOG?

The Alfred Bog is a little piece of boreal (northern) forest, hundreds of miles south of anything like it. Yet, at 4,200 hectares (10,000 acres), it is the biggest bog of its kind in Southern Ontario, big enough to give refuge to many plants and animals that were stranded as the warming climate pushed the boreal forest northward.

This domed peat bog has been building for 10,000 years and shelters many plants and animals that are rare or endangered, some of which are of national significance. 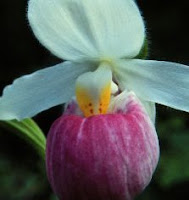 Examples include the Bog Elfin butterfly, Fletcher's dragonfly, spotted turtle, white fringed orchid, Atlantic sedge and rhodora. In fact the bog has been designated by the Ontario Ministry of Natural Resources as a "Class 1 Wetland" and an "Area of Natural and Scientific Interest (ANSI)".

Being a domed peat bog, the Alfred Bog is unlike the kettle bogs most commonly encountered south of the Hudson Bay lowlands. Kettle bogs are found typically in depressions such as those found when a huge block of glacial ice is buried and subsequently melts, leaving a pond in which vegetation has crept in from the edges until the whole surface is covered with a flat, quaking mat.

Domed bogs drain in all directions from the dome and the only nutrients received come from rain and snow. The dominant vegetation in both types of bog is sphagnum moss, known to gardeners as peat moss. Sphagnum moss thrives in the interior of bogs where cool, wet, oxygen starved, nutrient poor, acid conditions prevail. The dome is formed over millennia because sphagnum moss has the ability to wick up water from below. These conditions produce a unique community of plants and animals.

Alfred Bog lies in the east end of an abandoned channel of the Ottawa River . This was the main channel of a great river flowing down the Ottawa valley to the Atlantic Ocean. It drained a glacial lake centred in Manitoba. Because of reduced flow and glacial rebounding, the river abandoned its old channel and moved to its present location.

Mer Bleue, lying in the west end of the channel is Alfred's smaller twin.

The most significant impact upon the bog over the years has been the conversion of the bog land for agricultural purposes. The first settlers in the area found the bog to be of little use for farming and an obstacle to building roads. Nevertheless, over the years drainage around the margins has reduced it to about a third of its original size. 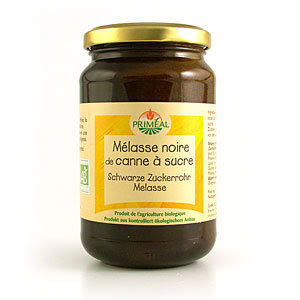 Lefaivre, besides being immendsely proud of native son Mgr Joseph Charbonneau, who went of from Vicar General of Ottawa to be Bishop of Hearst and Archbishop of Montreal, was proud of the port that was the centre of their town in the early 20th century.

One day, a shipment of molasses was dumped into the harbour in a shipping accident. The town dwellers coped with the crisis but neighbours from then on referred to them as molasses-eaters, a common foodstuff in those days.

The episcopal visitation of Alfred and Lefaivre took place from November 26-29 and included visits to the Catholc schools in the towns (Ecole St.-Victor in Alfred and Ecole St-Joseph in Lefaivre), nursing/retirement homes in each town (Mon Chez Nous in Lefaivre; Pension du Bonheur and Auberge Plein Soleil in Alfred).

We had a meeting of all the pastoral and financial councils of the two parishes of St-Victor and St. Thomas at the Centre d'Age D'Or in Alfred: many other service and church committees were also represented, sharing their pride and joy, concerns and questions. A vivacious gathering.

On Saturday evening at the anticipated Lord's Day Mass, Confirmation candidates from the two parishes received the outpouring of the Holy Spirit. 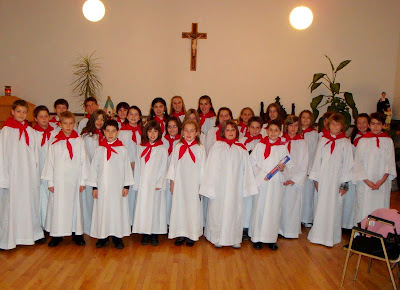 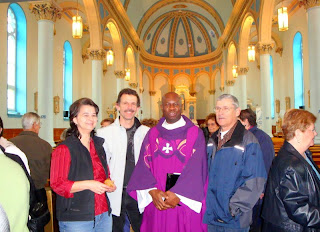 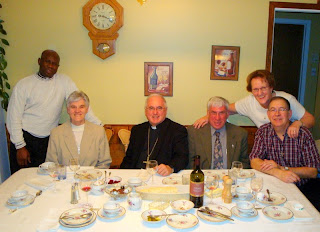 In the home of Deacon Real and Irene Lalonde

Posted by Archbishop Terry at 6:24 AM