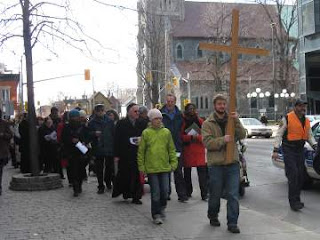 Today's Way of the Cross, sponsored by Communion and Liberation, will leave St. Patrick's Basilica at 9:30AM and arrive at Notre Dame Cathedral Basilica at approximately 11:30AM. There will be stops before the Supreme Court, Peace Tower and other symbolic places in our beautiful city.

The last two Good Friday marches have been marked by frigid weather; today's forecast of 20 degrees will be a welcome change. (Photo of last year's Way of the Cross by Deborah Gyapong, Canadian Catholic News) 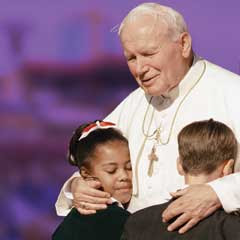 It was five years ago today that Karol Wojtyla, Pope John Paul was called home to the "house of the Father".

Because of the Sacred Triduum, Pope Benedict celebrated a Memorial Mass on Monday evening of this week.

In Ottawa, we will mark the occasion with a Memorial Mass followed by a musical tribute at Notre Dame Cathedral Basilica on Tuesday evening, April 6 at 7:30PM. I was pleased to join the Polish Ambassador and the Apostolic Nuncio in extending an invitation to the faithfal of the Archdiocese and others who wish to attend. Archbishop Pedro Lopez Quintana will preside at the Mass.

At that time I will be en route to a familiarization tour for bishops in Lebanon and Syria, prepared by CNEWA (Catholic Near East Welfare Association) Canada. We will meet Christian (and some Muslim) leaders in the region to offer support, as well as visit some of the projects supported by CNEWA.

The Paschal Fast in preparation for the great feast of the Resurrection of the Lord is obligatory on Good Friday and may be continued out of devotion on Holy Saturday.

Catholics are obliged to fast on Good Friday. This means that those who are over 18 and less than 60 years old are required to keep a limited fast, that is, to eat a single, normal meal and have lesser meals, as long as these do not add up to a second meal. Children are not required to fast. Those with medical conditions requiring greater or more regular food intake may be dispensed from this requirement.

Catholics are also required to abstain from meat on Good Friday. This applies to those who are 14 years or older. Person with special dietary needs may be dispensed from this requirement.

The Stations of the Cross led in the Roman Colosseum by Pope Benedict XVI this evening were written this year by Cardinal Ruini, emeritus Vicar of Rome. The excerpts below are taken from the CNS Blog site (http://cnsblog.wordpress.com/2010/04/01/way-of-the-cross-meditations/), where the full set (with beautiful illustrations) may be found.

The WAY OF THE CROSS (Twelfth Station): Jesus Dies on the Cross 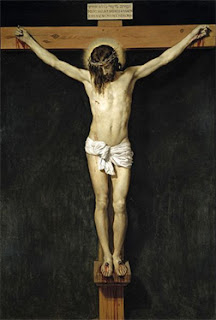 V/. We adore you, O Christ, and we bless you.
R/. Because by your holy cross you have redeemed the world.

From the Gospel according to John 19:28-30: After this Jesus, knowing that all was now finished, said (to fulfil the scripture), “I thirst.” A bowl full of vinegar stood there; so they put a sponge full of the vinegar on hyssop and held it to his mouth. When Jesus had received the vinegar, he said, “It is finished”; and he bowed his head and gave up his spirit.

Whenever death comes after a painful illness, it is customary to say with some relief, “He is no longer suffering”. In a certain sense, these words also apply to Jesus. Yet these words are all too limited and superficial in the face of any person’s death, and even more so in the face of the death of that man who is the Son of God.

When Jesus dies, the veil of the Temple of Jerusalem is torn in two and other signs occur, causing the Roman centurion to exclaim as he stands guard beneath the cross, “Truly this was the Son of God!” (cf. Mt 27:51-54).

In truth, nothing is as dark and mysterious as the death of the Son of God, who with God the Father is the source and fullness of life. Yet at the same time, nothing shines so brightly, for here the glory of God shines forth, the glory of all-powerful and merciful Love.

In the face of Jesus’ death, our response is the silence of adoration. In this way we entrust ourselves to him, we place ourselves in his hands, and we beg him that nothing, in our life or in our death, may ever separate us from him (cf. Rom 8:38-39).

The WAY OF THE CROSS (Thirteenth Station): Jesus Is Taken Down from the Cross 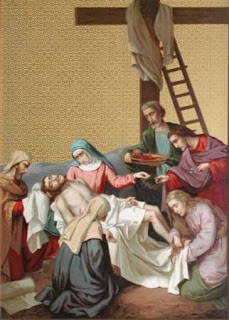 V/. We adore you, O Christ, and we bless you.
R/. Because by your holy cross you have redeemed the world.

From the Gospel according to John 2:1-5: There was a marriage at Cana in Galilee, and the mother of Jesus was there; Jesus also was invited to the marriage, with his disciples. When the wine gave out, the mother of Jesus said to him, “They have no wine.” And Jesus said to her, “O woman, what have you to do with me? My hour has not yet come.” His mother said to the servants, “Do whatever he tells you.”

Now the hour of Jesus has been completed and Jesus is taken down from the cross. Ready to receive him are the arms of his Mother. After having tasted the loneliness of death to the bitter end, Jesus immediately rediscovers – in his lifeless body – the strongest and sweetest of his human bonds, the warmth of his Mother’s affection. The greatest artists – we need but think for example of Michelangelo’s Pietà – have been able to intuit and express the depth and indestructible strength of this bond.

As we remember that Mary, standing at the foot of the cross, also became the mother of each one of us, we ask her to put into our hearts the feelings that unite her to Jesus. To be authentic Christians, to follow Jesus truly, we need to be bound to him with all that is within us: our minds, our will, our hearts, our daily choices great and small.

Only in this way can God stand at the centre of our lives. Only in this way can he be something more than a source of consolation which is ever close when needed, but without interfering with the concrete interests governing our daily lives and decisions. 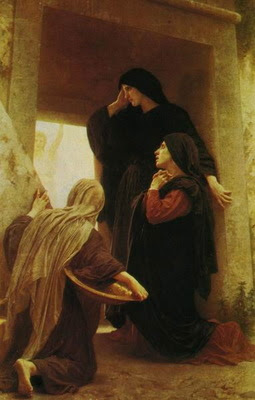 The Burial of Jesus

Now there was a good and righteous man named Joseph, who, though a member of the council, had not agreed to their plan and action. He came from the Jewish town of Arimathea, and he was waiting expectantly for the kingdom of God. This man went to Pilate and asked for the body of Jesus.

Then he took it down, wrapped it in a linen cloth, and laid it in a rock-hewn tomb where no one had ever been laid. It was the day of Preparation, and the sabbath was beginning.

The women who had come with him from Galilee followed, and they saw the tomb and how his body was laid. Then they returned, and prepared spices and ointments. On the sabbath they rested according to the commandment (Luke 23:50-56).
Posted by Archbishop Terry at 7:07 AM