Today in Canada the liturgy allows for the optional memorial of Blessed Kateri Tekakwitha, the Lily of the Mohawks.

During the recent CNEWA familiarization tour, Archbishop Alex J. Brunett of Seattle shared with us the news that a miracle undergone by a young man in his region, and attributed to the intercession of Blessed Kateri Tekakwitha, seems to have passed all the medical and scientific tests as being inexplicable.

This information was recently sent to Rome for study and, if determined to be a miracle by the Congregation of the Causes of Saints and confirmed as such by the Holy Father, could lead to her canonization. This would be great news for the Native Peoples of not only the United States and Canada but also for all the indigenous peoples of the Americas and elsewhere. The Church in the United States celebrates her feast on July 14 and the Canadian Bishops have asked to move her feast day out of the Easter Season (perhaps to late June) so that it could be solemnly observed every year.

O God, who, among the many marvels of Your Grace in the New World, did cause to blossom on the banks of the Mohawk and of the St. Lawrence, the pure and tender Lily, Kateri Tekakwitha, grant we beseech You, the favor we beg through her intercession, that this Young Lover of Jesus and of His Cross may soon be counted among the Saints of Holy Mother Church, and that our hearts may be enkindled with a stronger desire to imitate her innocence and faith. Through the same Christ Our Lord. Amen.

Blessed Kateri Tekakwitha, pray for us. 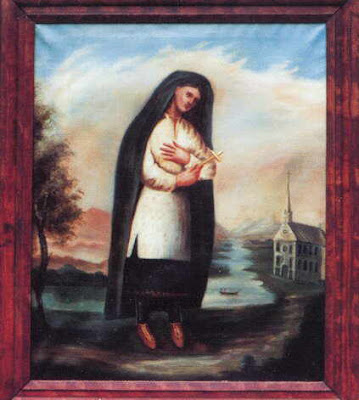 The oldest portrait of Kateri Tekakwitha is an oil painting on canvas 41"x37" painted by Father Chauchetière between 1682-1693. It hangs in the sacristy of St. Francis Xavier Church on the Kanawaké Mohawk Reservation on the south bank of the St. Lawrence River, near Montréal, Québec.

Father Pierre Cholenec, a witness at her deathbed, states that at the time of her death Kateri's face "... so disfigured and so swarthy in life, suddenly changed about fifteen minutes after her death, and in an instant became so beautiful and so fair that just as soon as I saw it (I was praying by her side) I let out a yell, I was so astonished, and I sent for the priest who was working at the repository for the Holy Thursday service. At the news of this prodigy, he came running along with some people who were with him. We then had the time to contemplate this marvel right up to the time of her burial. I frankly admit that my first thought at the time was that Catherine could well have entered heaven at that moment and that she had--as a preview--already received in her virginal body a small indication of the glory of which her soul had taken possession in Heaven.

Two Frenchmen from La Prairie de la Magdeleine came to the Sault on Thursday to be present at the service. They were passing by Catherine's cabin where, seing a woman lying on her mat and with such a beautiful and radiant face, they said to each other, Look at this young woman sleeping so peacefully and kept going. But, learning the next minute that it was a dead body, and that of Catherine, they returned to the cabin and went down on their knees to recommend themselves to her prayers. After having satisfied their devotion for having seen such a wonderful scene, they wished to show their veneration for the dead girl by constructing then and there a coffin to hold such cherished remains."

Kateri, orphaned, half blind, scarred by illness and of little worth in her own world, was destined for a greatness of the spirit that spans the centuries and reflects the landscapes - North American wilderness, world of the Iroquois, the Europeans, the mystical realm - in which she existed for so brief a time. These landscapes would collide, confound and torment, eventually robbing her of life, but they would also mold one of the most remarkable, hidden human beings to ever walk the trails of early America. She has been called the Lily of the Mohawks, but perhaps another title should be given to her as well: "Mystic of the Wilderness."

Another and more important title should be "Flower of the Algonquins" since it was her Christian Algonquin mother who instilled in her daughter her Christianity, her Catholicism.

Archbishop Timothy Dolan has a write-up on his weekly blog entry on our CNEWA trip (for the whole entry, cf. http://blog.archny.org/). Here are a few snippets:

Hardly two countries I would have pictured visiting after Easter! I have to admit that was my first reaction upon hearing the proposal from Monsignor Robert Stern, one of our great priests of the Archdiocese, who serves as Executive Secretary of the Catholic Near East Welfare Association (CNEWA), a most respected organization assisting our Eastern Rite Catholics in the lands of the Bible of the Mideast.

However, since as the Archbishop of New York I now serve as the president of this splendid agency, I thought I had best accept the invitation … and am I ever glad I did!

So, on Easter Wednesday I departed New York, to fly to Beirut, the beautifully stunning city of the Mediterranean Sea from where I now write you back home. 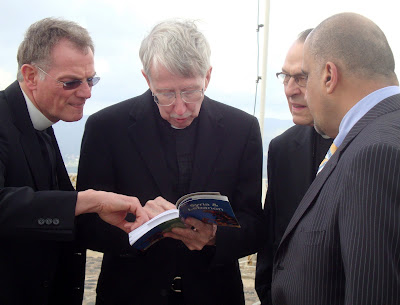 Where precisely are we?

It will take a while to sort through some impressions of the last week, but let me at least try to share with you the profound appreciation I have gained for the venerable Christian Communities of Syria and Lebanon.

They are ancient! We have been inspired by the deep sacred roots of these churches, places and people so much a cherished part of the story of our redemption.

So we have prayed “on the road to Damascus,” where Saul became Paul; at the house of Ananias on “Straight Street” where the shocked and blinded Paul came to be baptized: and at the church on the spot where St. Paul was lowered in a basket to escape persecutors.

So we have bent to enter caves where monks have lived in penitential, prayerful seclusion and silence since the earliest Christian centuries, and prayed at fifteen century-old shrines to our blessed mother and St. Thomas the Apostle in the mountains outside Damascus and Beirut....

Posted by Archbishop Terry at 7:50 AM