Happy Feast Day to all who are inspired by the Marian spirituality of today's saint, particularly two foundations that have long been present in the Archdiocese of Ottawa, the Montfort Fathers and the Filles de la Sagesse (Daughters of Wisdom). 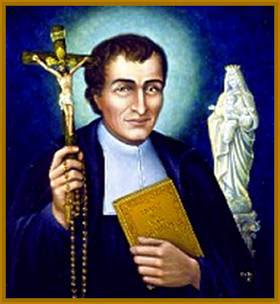 From his childhood, Louis de Montfort was indefatigably devoted to prayer before the Blessed Sacrament, and, when from his twelfth year he was sent as a day pupil to the Jesuit college at Rennes, he never failed to visit the church before and after class. He joined a society of young men who during holidays ministered to the poor and to the incurables in the hospitals, and read for them edifying books during their meals.

At the age of nineteen, he went on foot to Paris to follow the course in theology, gave away on the journey all his money to the poor, exchanged clothing with them, and made a vow to subsist thenceforth only on alms. He was ordained priest at the age of twenty-seven, and for some time fulfilled the duties of chaplain in a hospital.

In 1705, when he was thirty-two, he found his true vocation, and thereafter devoted himself to preaching to the people. During seventeen years he preached the Gospel in countless towns and villages. As an orator he was highly gifted, his language being simple but replete with fire and divine love. His whole life was conspicuous for virtues difficult for modern degeneracy to comprehend: constant prayer, love of the poor, poverty carried to an unheard-of degree, joy in humiliations and persecutions.
The following two instances will illustrate his success. He once gave a mission for the soldiers of the garrison at La Rochelle, and moved by his words, the men wept, and cried aloud for the forgiveness of their sins. In the procession which terminated this mission, an officer walked at the head, barefooted and carrying a banner, and the soldiers, also barefooted, followed, carrying in one hand a crucifix, in the other a rosary, and singing hymns.

Grignion's extraordinary influence was especially apparent in the matter of the calvary at Pontchateau. When he announced his determination of building a monumental calvary on a neighbouring hill, the idea was enthusiastically received by the inhabitants. For fifteen months between two and four hundred peasants worked daily without recompense, and the task had just been completed, when the king commanded that the whole should be demolished, and the land restored to its former condition. The Jansenists had convinced the Governor of Brittany that a fortress capable of affording aid to persons in revolt was being erected, and for several months five hundred peasants, watched by a company of soldiers, were compelled to carry out the work of destruction. Father de Montfort was not disturbed on receiving this humiliating news, exclaiming only: "Blessed be God!"

This was by no means the only trial to which Grignion was subjected. It often happened that the Jansenists, irritated by his success, secure by their intrigues his banishment form the district, in which he was giving a mission. At La Rochelle some wretches put poison into his cup of broth, and, despite the antidote which he swallowed, his health was always impaired. On another occasion, some malefactors hid in a narrow street with the intention of assassinating him, but he had a presentiment of danger and escaped by going by another street.

A year before his death, Father de Montfort founded two congregations -- the Daughters of Wisdom (Filles de la Sagesse), who were to devote themselves to hospital work and the instruction of poor girls, and the Company of Mary (Montfort Fathers), composed of missionaries. He had long cherished these projects but circumstances had hindered their execution, and, humanly speaking, the work appeared to have failed at his death, since these congregations numbered respectively only four sisters and two priests with a few brothers. But the blessed founder, who had on several occasions shown himself possessed of the gift of prophecy, knew that the tree would grow.

At the beginning of the twentieth century the Daughters of Wisdom numbered five thousand, and were spread throughout every country; they possessed forty-four houses, and gave instruction to 60,000 children. After the death of its founder, the Company of Mary was governed for 39 years by Father Mulot. He had at first refused to join de Montfort in his missionary labours. "I cannot become a missionary", said he, "for I have been paralysed on one side for years; I have an infection of the lungs which scarcely allows me to breathe, and am indeed so ill that I have no rest day or night." But the holy man, impelled by a sudden inspiration, replied, "As soon as you begin to preach you will be completely cured." And the event justified the prediction. Grignion de Montfort was beatified by Leo XIII in 1888 and canonized by Pius XII in 1947.

The Casina ("cottage") of Pope Pius IV is a lovely building in the Vatican Gardens that now houses the Pontifical Academy of Sciences and the Academy of Social Sciences, presided over by Archbishop Marcelo Sanchez Sorondo, our host today.

Following our morning session, which was report on the last stages of editing of the English translation of the Roman Missal, we travelled by bus to the Casina and enjoyed the magestic views of St. Peter's, the Vatican Gardens and the nearby Vatican Museums from it.

During our luncheon with the Holy Father, Cardinal Pell, our Chairman at Vox Clara and Cardinal Canizares Llovera, the Prefect of the Congregation for Divine Worship and the Discipline of the Sacraments spoke to the occasion. As did the Holy Father in the following words, which stressed the steps ahead now, the preparation of the priests and people to receive positively the new translation:

I thank you for the work that Vox Clara has done over the last eight years, assisting and advising the Congregation for Divine Worship and the Discipline of the Sacraments in fulfilling its responsibilities with regard to the English translations of liturgical texts. This has been a truly collegial enterprise. Not only are all five continents represented in the membership of the Committee, but you have been assiduous in drawing together contributions from Bishops’ Conferences in English-speaking territories all over the world.

I thank you for the great labour you have expended in your study of the translations and in processing the results of the many consultations that have been conducted. I thank the expert assistants for offering the fruits of their scholarship in order to render a service to the universal Church. And I thank the Superiors and Officials of the Congregation for their daily, painstaking work of overseeing the preparation and translation of texts that proclaim the truth of our redemption in Christ, the Incarnate Word of God.

Saint Augustine spoke beautifully of the relation between John the Baptist, the vox clara that resounded on the banks of the Jordan, and the Word that he spoke. A voice, he said, serves to share with the listener the message that is already in the speaker’s heart.

Once the word has been spoken, it is present in the hearts of both, and so the voice, its task having been completed, can fade away (cf. Sermon 293). I welcome the news that the English translation of the Roman Missal will soon be ready for publication, so that the texts you have worked so hard to prepare may be proclaimed in the liturgy that is celebrated across the anglophone world. Through these sacred texts and the actions that accompany them, Christ will be made present and active in the midst of his people. The voice that helped bring these words to birth will have completed its task.

A new task will then present itself, one which falls outside the direct competence of Vox Clara, but which in one way or another will involve all of you – the task of preparing for the reception of the new translation by clergy and lay faithful. Many will find it hard to adjust to unfamiliar texts after nearly forty years of continuous use of the previous translation. The change will need to be introduced with due sensitivity, and the opportunity for catechesis that it presents will need to be firmly grasped.

I pray that in this way any risk of confusion or bewilderment will be averted, and the change will serve instead as a springboard for a renewal and a deepening of Eucharistic devotion all over the English-speaking world.

Dear Brother Bishops, Reverend Fathers, Friends, I want you to know how much I appreciate the great collaborative endeavour to which you have contributed. Soon the fruits of your labours will be made available to English-speaking congregations everywhere.

As the prayers of God’s people rise before him like incense (cf. Psalm 140:2), may the Lord’s blessing come down upon all who have contributed their time and expertise to crafting the texts in which those prayers are expressed. Thank you, and may you be abundantly rewarded for your generous service to God’s people. 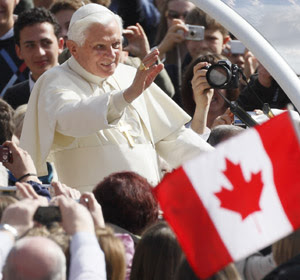 The photo shows the Canadian flag at the edge of a photo of Pope Benedict in St. Peter's square.

It is being used to symbolize the contribution of Canada to the luncheon: Ice wines from Ontario served with the dessert at today's luncheon.

In all fairness, I must report that two other English-speaking wine-producing countries represented in the Vox Clara membership also contributed to today's festivities: an Australian white wine with the salad and risotto courses and a red wine from Oregon, USA that accompanied the main meat course.
Posted by Archbishop Terry at 11:42 AM