Pope St. Martin I - The Completion of the Via LUCIS 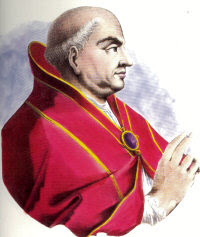 The unfortunate victim of Constans' wrath was the virtuous Martin. Born in Todi of noble birth, he had served as nuncio to Constantinople under Pope Theodore, gaining experience in dealing with the Byzantine court and familiarizing himself with the Monothelite teachings so prevalent in the East. Without waiting for the necessary imperial mandate, Martin proceeded with his consecration on July 5, 649. This independent act so enraged the emperor that he refused to acknowledge Martin as the legitimate pope.

A staunch defender of the orthodox, Martin immediately convened a synod in the Lateran. Attended by 105 Western bishops, the synod studied all aspects of Monothelitism and the emperor's Type. After nearly a month, the synod reached a conclusion. They determined that there were two wills in Christ, condemned the One Will heresy, and further condemned Constans' Type for boldly prohibiting the truthful teachings of the apostles. In an effort to pacify the emperor, Martin acknowledged Constans' good intentions in trying to unify the Church and placed the burden of responsibility on the poor advice of Constantinople's patriarchs.

Constans, far from appeased, was determined that his religious policies would not be ignored. Appointing his chamberlain Olympius as exarch to Italy, he dispatched him with the order to obtain the signatures of acceptance from all Italians without exception. Olympius proved to be a dismal failure, both in his mission and in an attempted assassination of the popular pope. The exarch prudently abandoned his post and fled to Sicily to fight the invading Muslims.

In the summer of 653, the furious emperor appointed yet another exarch, Theodore Calliopas, with orders to escort the inflexible pontiff to Constantinople. Calliopas and his officers boldly entered the Lateran, arrested the bedridden Martin, and presented the clergy with Constans' edict deposing the pope who had been consecrated illegally.

The voyage, which took nearly three months, subjected the sickly pope to humiliation and abuse. Arriving in Constantinople, racked with dysentery and disabled by gout, Martin was placed in solitary confinement. On December 19, 653, Martin was brought to trial on trumped-up charges of treason and sacrilege.

The pope, near death and realizing his position futile, could only laugh at the ridiculous accusations and beg the emperor to excuse the fumbling witnesses before they added perjury to false witness! Constans pronounced the predetermined verdict of guilty on the pontiff and sentenced him to public flogging and death. The disapproving crowd watched, horrified; and it was only by the dying Patriarch Paul's intercession that Martin's sentence of public execution was commuted to banishment.

For nearly three months, the pope suffered under the worst conditions in a Byzantine prison before he was exiled to the Crimea. There, on September 16, 655, suffering from cold and starvation, Pope Martin gratefully met his God. Pious Martin had been disgraced in life but later became honored as a martyr.

Today he is venerated as a saint; his feast is celebrated by both the Roman and Greek Churches on April 13. — The Popes: A Papal History, J.V. Bartlett

The CNEWA sponosored visit to Syria and Lebanon is drawing to a close with visits today to a refugee camp, an orphanage and other works financially assisted by benefactors in Canada and the USA.

Yesterday, we visited the Patriarch of the Maronites, Cardinal Nasrallah Sefir, the Syrian Catholic Patriarch Ignace Youssef III Younan, who used to attend the CCCB meetings while serving as eparch of the USA and Canada, the Melchite Seminary and a school for young girls with family or social difficulties. A rich day!

You are asked to remember in prayer Father Gerald Gahagan, one of the priests who has been in residence with me, in the hospital now for more than a month and whose condition has taken a turn for the worse.

All:
We adore You, O Christ
and we praise You!
Because by the Wood of the Cross and
the Light of the Resurrection,
You have redeemed the world!

Reading: "... Suddenly there came from the sky a noise like a strong driving wind, and it filled the entire house. Then there appeared to them tongues as of fire, which parted and came to rest on each one of them. And they were all filled with the Holy Spirit and began to speak in different tongues, as the Spirit enabled them to proclaim" (Acts 2: 2-4). 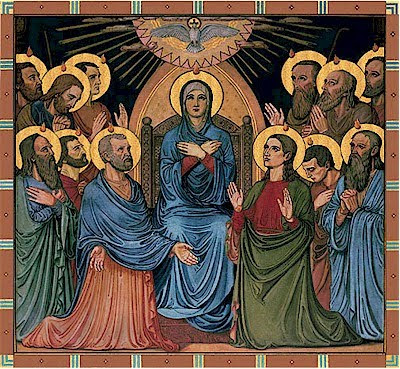 Reflection: The power of the Holy Spirit drives the disciples from the Upper Room into the streets and marketplace. The Spirit compels them to take the message everywhere, in places familiar and unfamiliar, not stopping until they reach the ends of the world. We have been clothed with the same Spirit. We are called to be evangelizers and witnesses, near and far, wherever we go. The Spirit always goes before us, preparing the way and strengthening our hearts to be generous servants of the Risen Lord who ever guides us. Pentecost is an enduring and continuing event. We implore the Holy Spirit to renew the face of the earth by renewing us.

Silence
Prayer: Father in heaven, through this spiritual journey, You have reminded us of the fullness of the mystery of Your revealed love. See Your people gathered in prayer, open to receive the Spirit's flame. May it come to rest in our hearts and disperse the divisions of word and tongue. With one voice and one song, may we praise Your name in joy and thanksgiving. Grant this through Christ our Lord, and in the power of the Spirit, both now and forevermore. Amen.

Reading: " ... Jesus Himself, through them, sent forth from east to west the sacred and imperishable proclamation of eternal salvation. Amen" (Mark 16:8, the Shorter Ending).

Reflection: Through the Via Lucis, we have shared our pilgrim journey with the Risen Lord. As servants and witnesses of Christ, let us now pray in the way our Savior taught us:

Prayer: Lord, may everything we do, begin with Your inspiration, continue with Your help, and reach perfection under Your guidance. We ask this through Christ, our Risen Lord. Amen.

Sign of Peace
Posted by Archbishop Terry at 1:35 AM