A Map of Our CNEWA Itinerary - Last Day in Beirut, Sidon 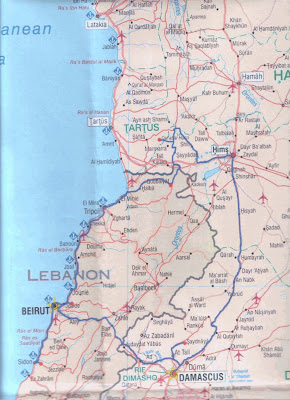 This map shows the trajectory of our voyage, north from Beirut to historic Byblos and to Kobayat where CNEWA sponsors an olive press cooperative, across the border to Syria, stopping in Homs [spelled Hims on the map], Damascus and Saydnaya, back on the Damascus-Beyrouth highway, then in the environs of Beirut until today's trip south to Saida (biblical Sidon)

On my return, I will write up features of the trip (with photos) each day for a week or so. Meantime, here is a brief report of the last day.

Yesterday, we spent some sad moments hearing from the Les Petites Soeurs de Nazareth (2 Belgians and one Lebanese) of the disheartening status of the residents of the Christian Refugee Camp at nearby Dbayeh who effectively have the status of non-persons without much hope of the situation that has endured for 60+ years changing anytime soon. Here is a briefing note provided us by the Pontifical Mission to Palestine and its successor/collaborator agency CNEWA:

Dbayeh Camp was established in Lebanon in the early 1950’s to absorb Palestinian refugees expelled during the 1948 Arab-Israeli war. Most of the residents originally came from villages in Galilee. It is the only refugee camp in the country with a Christian population and the only one where people are un-armed.

At the time, the Maronite monks of Saint Joseph monastery in Dbayeh sheltered the refugees. They set up a tent camp on a parcel of land near their monastery. Later, CNEWA/Pontifical Mission in partnership with UNRWA replaced the tents with 572 small one-room shelters with roofs made of removable steel sheets and public sanitary facilities which were supposed to be temporary until the refugees could return to Palestine. During the civil war, the population of the camp replaced the roofs by concrete ones and installed small primitive sanitary facilities inside their apartments (kitchen and toilet).

Dbayeh camp suffers some of the worst poverty possible. Lebanese law reinforces segregation, strictly circumscribing the rights of refugees. They live in severe economic hardships, in which prostitution, theft, illiteracy, alcoholism are highly correlated with unemployment, and drug addiction.

In 1978, CNEWA/Pontifical Mission offered living quarters in Dbayeh for the Little Sisters who, have settled in Lebanon since 1971. With the efforts and commitment of the sisters who cared deeply about the needs of the people, the dimension of aid changed drastically.

Since 1978, the Little Sisters of Nazareth lived and provided spiritual, social and pastoral activities to Dbayeh camp residents in an old school that was built by CNEWA in 1948. During the war, different military forces occupied this school. However, in 1995, CNEWA repaired part of the school. The classrooms serve to have after-class lessons.

The sisters spend their afternoons teaching many of the camp’s teenagers while in the evenings, they teach the young adults. On Saturdays, they work with children between the ages of 3 and 13. On Wednesdays, they train older youths to teach. Thus, they provide pastoral education to around 150 students.

In addition to education and formation, the sisters provide some medical help to around 250 families as well as basic supplies (food, clothing, etc…). The UNRWA office has a dispensary that opens twice a week. However, lacking funds, the quality of its provided services is very low and most of the time is short of medication. The sisters remain the only hope of this marginalized group.

Through CNEWA, benefactors have sponsored many of the camp’s needy children and also fund educational programs, emergency health care and even infrastructure repair. To-date CNEWA/Pontifical Mission has supported the population of the camp through:
• An annual sponsorship program for 90 children in the amount of $ 12,960
• An annual subsidy for the sisters in the amount of US $ 4,000 for emergency needs for the inhabitants and for the cost of retreats for the sisters
• Repair of the church and priest house
• Repair of the sister’s house
• Repair of the school 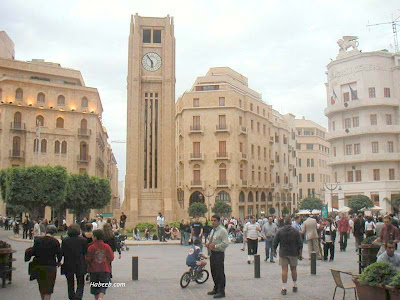 After lunch at a restaurant at Place de L'Etoile, a reconstruted part of downtown Beirut levelled in the devastation of the civil war, we dropped off those leaving for Rome: Cardinal Foley and Msgr. Brouwers, Archbishop Dolan and Father James Cruz, his personal secretary, Msgr. William Lyons of PNAC at the Raffi Harriri International Airport and continued down the coastal highway to visit a couple of CNEWA projects: Foyer de la Providence, a technical school and orphanage, and Residence Saint Elie, a home for the elderly.

At the latter, we met His Excellency Bishop Kwaiter, retired bishop of Tyre and the brother of Ottawa's famous Msgr Kwaiter, founder and pastor of Sts. Peter and Paul Melchite Parish for forty years.

Our last stop before heading back to Notre Dame du Puits was at a Marian Shrine in the hills overlooking Saida. Here is an edited version of the treatment on Wikipedia:

A Marian Shrine near Sidon

Our Lady of Mantara, also known in English as Our Lady of Awaiting, is a holy Christian site and a Marian shrine in the village of Maghdouché in Lebanon. The shrine consists of a tower crowned with the statue of the Virgin and Child, a basilica under construction, a cemetery and a sacred cave believed to be the one where the Virgin Mary rested while she waited for Jesus.

[This was while Jesus and his disciples journeyed in the region of Tyre and Sidon, including his meeting with the Syro-Phoenician woman (Mark 7:31-37; cf. Matthew 15:21-28 where she is called a Canaanite). According to local tradition the mother of Jesus and the other accompanying women would not enter pagan cities and so stayed outside in the hills.]

Since the early Christian era, the inhabitants of Magdhdouché have venerated the cave where the Virgin Mary rested while she waited for her son, Jesus to finish preaching in Sidon. Saint Helena asked the Bishop of Tyre to consecrate a little chapel at the cave in Magdhdouché. She sent the people of Magdhdouché an icon of the Mother and Child and some altar furnishings. Historians believe that Saint Helena asked the people to name the chapel, and they named it “Our Lady of Mantara” or “Our Lady of the Awaiting” because it was there that the Holy Mother waited for her son. Mantara is derivative of the Semitic root ntr, which means “to wait.”

Saint Helen provided funds from the imperial treasury for the maintenance of the chapel. The funding continued for three centuries of Byzantine rule in Phoenicia until Khalid ibn al-Walid defeated Emperor Heraclius at the Battle of the Yarmuk. While the caliphate, Omar, who became ruler of Jerusalem, was a pious and humble man, sparing Christendom's holiest shrines and being tolerant of his Christian subjects, the Arab rulers of the rest of Byzantium were less tolerant of the Christians, especially in the maritime cities of Tyre, Sidon, Beirut, Byblos, and Tripoli.

After the majority of the Sidonians converted to Islam to receive promised privileges and immunities, the people of Magdhdouché withdrew to higher elevation on Mount Lebanon. The caliphate had recognized the Christians of Mount Lebanon as autonomous communities, paying a fixed tax. Before abandoning their village, they concealed the entrance to the cave of Our Lady of Mantara with stones, earth and vines. The people left the village through obscure mountain paths to the strongholds of Christian Lebanon. The legend of Our Lady of Mantara was passed down to the exiled generations of Magdhdouché for one thousand years.

The people of Magdhdouché did not return to their ancestral home despite the arrival of the Crusaders in Sidon. The Crusaders spent most of the12th and 13th centuries in the shadow of Magdhdouché without ever suspecting the sacred cave’s existence even though they built a small fort, called La Franche Garde, within meters of the hidden entrance to the cave.

The people of Magdhdouché only returned to their ancestral village during the reign of Lebanon's greatest ruler, the Druze Prince Fakhreddin II (1572-1635). The prince was the most tolerant and enlightened ruler of his day and age. He believed in equality amongst the diverse religious followers of his Lebanon. To demonstrate this equality, he appointed a Maronite Catholic as Prime Minister, a Muslim as Minister of the Interior, a Druze as Army Commander and a Jew as Finance Minister. His princedom was a rare example of non-sectarianism, and it soon became the most prosperous principality in the Ottoman Empire.

Prince Fakhreddin II created an atmosphere of freedom and security that encouraged economical progress. He made treaties with Tuscany, and other Italian states, as well as Spain and France. He opened his ports to foreign trade and welcomed Jesuit missionaries to open educational missions throughout Mount Lebanon. For the first time in a thousand years, the people of Magdhdouché felt that they were safe, and so in 1683, they returned to their ancestral village.

It was not easy to relocate the sacred cave even though the men of Magdhdouché worked for hundreds of years near the grotto, pulling down the stones of the Crusader fort for building material for their new homes. The cave was finally rediscovered on September 8, 1721 by a young shepherd when one of his goats fell in a well-like opening in the porous limestone. Wanting to save his goat, the shepherd made a rope from vine twigs, tied it to a tree, and descended into the hole, but the rope broke and he fell. When his eyes became accustomed to the darkness of the grotto, the boy saw a soft glimmer of a golden object, which turned out to be Saint Helena’s, icon of the Mother and Child. The boy climbed up the stone walls and ran to the village to tell his discovery.

Ever since the rediscovery, the cave of Our Lady of Mantara has been open to the public. It has become a major pilgrimage site in the Lebanon. The adjacent hilltop where Jesus and Mary had once stood is now Sidon's Greek Catholic cemetery. Grand festivities are held each year on September 8 to commemorate the rediscovery of the sacred cave.

Near the sacred cave, the people of Magdhdouché built a basilica and a modern tower crowned with a bronze statue of the Virgin and Child. The tower offers pilgrims panoramic views of Sidon, the Mediterranean, and the lush hills, valleys and citrus groves of Lebanon.
Posted by Archbishop Terry at 2:06 AM