Easter Monday of the Angel - The Via Lucis 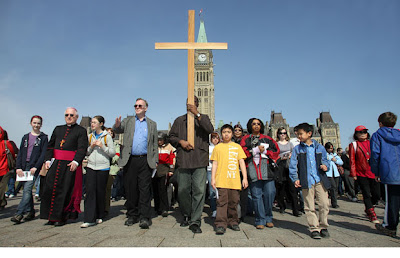 The Way of the Cross leaves the Peace Tower on Good Friday (photo: Ottawa Citizen) cf the full photo gallery at: http://www.ottawacitizen.com/news/photos/Gallery+Good+Friday+Ottawa/2758063/story.html

In some countries, Easter Monday is a holiday and referred to as the "Monday of the Angel" who brought to the women the news of the Resurrection of Jesus. The Lord's resurrection totally transformed the universe and every relationship.

One way of appreciating this is the recent renewal of the Via Lucis, a series of Stations of Light that show an equal number of manifestations of the light of the Resurrection in people's lives as there are Stations of the Cross. Here is an overview of the devotion and the first station. The other stations will be presented in coming days. 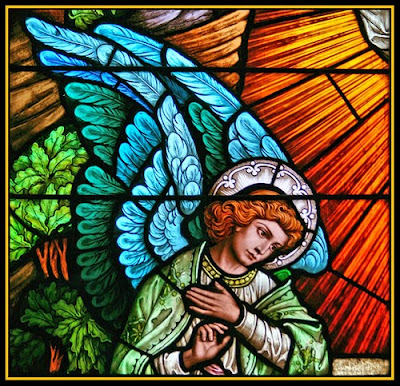 History and Explanation of the Via Lucis Devotion

The Way of the Cross (Via Crucis) follows the course of Jesus' passion, death, and burial; it is observed by the devotion to the Stations of the Cross, a collection of 14 images which are to be found in virtually all Catholic churches.

The Way of Light (Via Lucis) celebrates the most joyful time in the Christian liturgical year, the fifty days from Easter (the resurrection) to Pentecost (descent of the Holy Spirit). The idea for depicting the Way of Light was inspired by an ancient inscription found on a wall of the San Callisto Catacombs on the Appian Way in Rome. This cemetery is named for Saint Callistus, a slave who eventually became the 16th pope (217-222).

The inscription found at Saint Callistus comes from the first letter St. Paul wrote to the church at Corinth (around 56 A.D.), in response to the report that some members were denying the Resurrection. The full statement in the letter is (1 Corinthians 15:3-8):

In the 1990s, Father Sabino Palumbieri, a Salesian priest in Rome, helped develop the idea to combine the events mentioned in the Saint Callistus inscription with other post-Resurrection events to create a new set of stations, the Stations of the Resurrection.

These new stations emphasize the positive, hopeful aspect of the Christian story that is not absent from the Way of the Cross, but is not as evident because of its tortuous side.

This Way of Light, as it was called, thus serves as a complement to the Way of the Cross, and was fashioned of fourteen stations paralleling the fourteen Stations of the Cross.

This devotion has received formal recognition by the Vatican's Congregation for Divine Worship and the Discipline of the Sacraments. The Via Lucis was listed (#153) in its Directory on Popular Piety and the Liturgy (December 2001):

A pious exercise called the Via Lucis has developed and spread to many regions in recent years. Following the model of the Via Crucis, the faithful process while meditating on the various appearances of Jesus-from his Resurrection to his Ascension-in which he showed his glory to the disciples who awaited the coming of the Holy Spirit (cf. John 14, 26; 16, 13-15; Luke: 24, 49), strengthened their faith, brought to completion his teaching on the Kingdom and more closely defined the sacramental and hierarchical structure of the Church.

Through the Via Lucis, the faithful recall the central event of the faith-the resurrection of Christ-and their discipleship in virtue of Baptism, the paschal sacrament by which they have passed from the darkness of sin to the bright radiance of the light of grace (cf. Colossians 1, 13; Ephesians 5, 8).

For centuries the Via Crucis involved the faithful in the first moment of the Easter event, namely the Passion, and helped to fixed its most important aspects in their consciousness. Analogously, the Via Lucis, when celebrated in fidelity to the Gospel text, can effectively convey a living understanding to the faithful of the second moment of the Pascal event, namely the Lord's Resurrection.

The Via Lucis is potentially an excellent pedagogy of the faith, since "per crucem ad lucem." Using the metaphor of a journey, the Via Lucis moves from the experience of suffering, which in God's plan is part of life, to the hope of arriving at man's true end: liberation, joy, and peace, which are essentially paschal values.

The Via Lucis is a potential stimulus for the restoration of a "culture of life" which is open to the hope and certitude offered by faith, in a society often characterized by a "culture of death", despair, and nihilism.

Stations of the Resurrection

'For we have grown into union with Christ through a death like His, we shall also be united with Him in the resurrection....If, then, we have died with Christ, we believe that we shall live with Him....Consequently, you too must think of yourselves as being dead to sin and living for God in Christ Jesus: (Romans 6: 5, 7, 11). 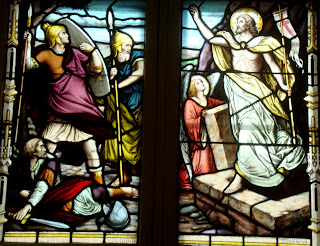 The Lord Jesus Rises from the Dead, Window at St. Patrick's Church, Fallowfield (Nepean), ON

Let us walk this pilgrimage of faith, the Via Lucis, as daughters and sons of the light and as witnesses of the Risen Lord. Let us meditate upon the resurrection of Christ and discover the pathway of light that Christ blazes through our lives.

We adore You, O Christ
and we praise You!
Because by the Wood of the Cross and
the Light of the Resurrection,
You have redeemed the world!

"The angel of the Lord said to the women: 'Do not be afraid! I know that you are seeking Jesus the crucified. He is not here, for He has been raised just as He said." (Matthew 28: 5b-6a).

On the first day of the week, at the dawning of the new creation, Jesus arose from the dead. No one saw the event, yet like the apostles, we are called to be witnesses of this central faith event. The light and power of Christ's death and resurrection has become the pattern for our living. May we recognize Christ's dying and rising in our midst.

Prayer: This is the day, Lord God, that You have made! Raising Christ from the dead, and raising us with Christ, You have fashioned for Yourself a new people. As we hear the word that brings salvation, make our hearts burn within us. Through the presence of every friend and stranger, reveal to us the face of the One who had first to suffer, but who has entered now into glory, Jesus Christ, our Passover and our Peace, living and reigning with You, forever and ever. Amen. 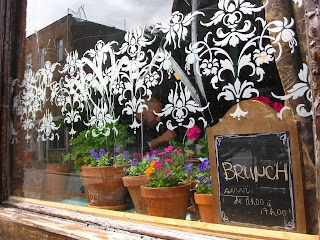 I am in Montreal visiting with family and friends today. I have just downloaded photos from the weekend: Easter Vigil and Neophytes, Easter Brunch with the Queenship of Mary, enjoying the warm weather and flowers. I don't have time to post them now but will do so in the coming days.

Blessed Paschaltide! Alleluia, Alleluia!
Posted by Archbishop Terry at 7:29 AM