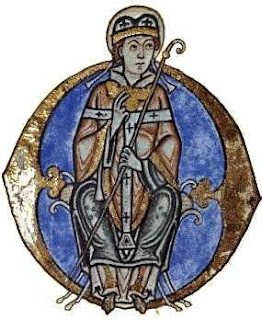 Today, the liturgy permits an optional memorial of Doctor of the Church, St. Anselm of Canterbury (c. 1033 – 21 April 1109), an Italian, a Benedictine monk, a philosopher, and a prelate of the church who held the office of Archbishop of Canterbury from 1093 to 1109.

Called the founder of scholasticism, he is famous in the West as the originator of the ontological argument for the existence of God. In 1720, Anselm was recognized as a saint by Pope Clement XI; he was proclaimed a Doctor of the Church, though he was never formally canonized.

On 21 April 1909, 800 years after his death, Pope Pius X issued an encyclical "Communium Rerum", praising Anselm, his ecclesiastical career, and his writings. His symbol in hagiography is the ship, representing the spiritual independence of the church. 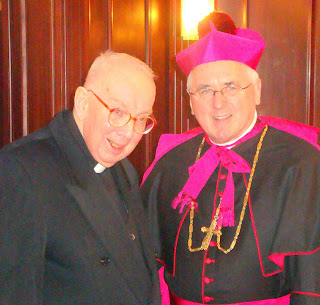 Father Gerald Joseph Gahagan died early in Eastertide, when we, the followers of Jesus, are full of joy in the resurrection of Jesus, who has put an end to suffering, death and the tears of his disciples.

The readings chosen for this Mass are meant to comfort us in our loss and to help us pray that our brother, uncle, fellow priest, pastor, friend may receive a merciful judgment from Christ the Good Shepherd and be led by him to fulfil his every aspiration—and we know they were many—and to slake his every longing at the waters of eternal life in God’s heavenly Kingdom.

All of a Christian’s life is lived between the two great watershed events of history, the culmination of the incarnation of God’s word in human flesh that took place in the paschal mystery through the death and resurrection of Jesus, on the one hand, and, on the other hand, his coming again in glory which brings that paschal mystery as it is lived in the lives of his disciples to glorious fulfilment.

As our eyes gradually turn from Jesus’ resurrection to the coming one that will be ours, the liturgy urges us to keep alert because the Lord Jesus is coming: coming at the end of time yes, but also coming in the mystery of our own death.

The Second Vatican Council reminded us that the most important moment in each Christian’s life is their configuration to Christ’s dying to sin and rising to new life in the sacrament of baptism, which Father Gerry experienced in this parish church of St. Patrick.

It was also here that he frequently went to the Lord in confession, received Holy Communion countless times and was anointed by the Holy Spirit to take part in Christ’s mission both in his Confirmation and definitively in the Holy Priesthood on June 5, 1965.

Baptismal imagery has pride of place in a Christian’s funeral: the paschal candle—symbol of Christ’s presence among us—[the pall on the coffin, a sign of our brother’s having been clothed with the new life of Christ at baptism]— and the white garments worn by the celebrants and with which our brother priest, Gerald Gahagan is garbed in his coffin.

Each Christian lives the union with Christ in his or her unique way. Not only the inner spirituality of the sacraments but also that inner life which is nurtured by the Word of God—heard and meditated on—by personal prayer. All of these were the stuff of the life of our brother Gerald Joseph Gahagan.

And so last Thursday, the day before his passing into the fullness of eternal life, as we chatted and prayed in his hospital room, I asked whether he wanted me to read him something and he said, yes, something from the Heroes of the Reformation by Belloc.

Looking around, I could not find it, but there were newspapers, periodicals and books on sports which he followed with a passion; politics, which he commented on with authority and conviction; and Phil Edmonston’s 2010 “Lemon Aid”, a guide to purchasing a new car, which he had in mind to do this spring.

Father Gerry was a man of hope and optimism: he would tell me of the long-term subscriptions he had taken out—all this at a time when he used to say, “I have four things I can die of at any time!” As long as the Lord would leave him here, Father Gerry felt, let’s make the best of it. And he did, whether it was a drink of Scotch whiskey or dawdling over a late breakfast, going out for a meal with Cathy and Joe, anticipating a visit from his protégé Matthew Keshwah or any number of other pleasures that made every day a delight for him. He would have no trouble accepting the Lord’s invitation to the eschatological banquet at the end of time that Isaiah foretold in the first reading.

In the end, I found his Bible and asked if he would let me read him a text, at which he lit up. We read from Romans chapter eight where Paul says that the sufferings of this time are not worth comparing with the weight of glory that will be ours when the groans and travails of hours on the dialysis machine or going down for another consultation will finally be swallowed up as we share the glory of our Risen Lord.

This is why, several months ago, I chose the second reading because it speaks of the way in which an individual—the priest as minister of the gospel—realizes in his body and in his spirit what Paul spoke about on the macro-level in his magisterial Epistle to the Church at Rome. Father Gerry was willing to join with Christ in suffering for the gospel, relying on the power of God, who saved us and called us with a holy calling, not according to our works but according to his own purpose and grace.

This grace, Paul says, was given to us in Christ Jesus before the ages began, a vocation Father Gerry took some time to finally accept, having, at one point, left priestly formation for several years.

But in due time he recognized that he had been appointed a herald, an apostle and a teacher, and for this reason did he suffer as he did.

With St. Paul Father Gerry could say, “I know the one in whom I have put my trust, and I am sure that he is able to guard until that day what I have entrusted to him”.

And so, he would say to us, “Hold to the standard of sound teaching that you have heard from me, in the faith and love that are in Christ Jesus. Guard the good treasure entrusted to you, with the help of the Holy Spirit living in us.”

In a book describing the nature of the diocesan priesthood, the author depicts the diocesan priest in these terms, “someone chosen, sensitised, and specially empowered to call down fire, the fire of God’s creative love. In the radiance and heat of that fire, the priest doctors the souls of others, who often are seeking for what they do not know and cannot name. Carefully and confidently guiding people into that mysterious fire and quickening its flame in our midst—this is the heart and soul of the diocesan priesthood” (George Aschenbrenner, Quickening the Fire in Our Midst: The Challenge of Diocesan Priestly Spirituality [Chicago: Loyola Press, 2002], 156).

Each priest has his own way to give expression to the unity with Christ that enables him to bring the fire of the Holy Spirit to his people. Clearly one of Father Gahagan’s ways of embodying his charism was in that personal care he manifested to his parishioners and the gift he had, and care he took, in knowing and remembering each by name (as Christ the Good Shepherd does) when he served as a curate at Ottawa’s Blessed Sacrament Church and Our Lady of Fatima Churches and, later on, as Pastor of St. Peter Celestine (Pakenham), St. Michael's (Corkery), St. Clare's (Dwyer Hill), St. Philip's (Richmond) and finally, for eighteen years, at St. Theresa of the Child Jesus (Ottawa).

There is no gift or talent one has received that cannot be embraced by the Risen Lord in service to his church and so it’s important to encourage young men today to put their gifts and talents at the service of God’s people as Father Gahagan did.

I only really got to know Father Gerry in his retirement years at the Archbishop’s residence where he had arrived a year before I came to Ottawa. Most of all I heard of how proud he was of his time at St. Theresa’s and the one picture of him I found of the web last Friday when I Googled his name was of him at the altar there. And that brings us to the heart of the priest’s ministry: the celebration of the Holy Eucharist, the theme of the gospel reading for this very day.

Here we see the deep roots in the mystery of Christ and the Church of the profound meaning of Father Gerry’s life and his ministry. In the rich gospel passage, Jesus associates his gift of himself as the bread of life, with his pledge to give those who believe in him the gift of eternal life: “ Whoever comes to me will never be hungry, and whoever believes in me will never be thirsty. … Everything that the Father gives me will come to me, and anyone who comes to me I will never drive away; for … this is the will of him who sent me, that I should lose nothing of all that he has given me, but raise it up on the last day.”

When I was a teenager, our parish priest gave several of us young men a brief talk on the priesthood. His closing words were about the end of a life spent in devotion to Christ and His people; he said of a priest’s relation with Christ, “with the Lord the best is always yet to come”.

We know that this is true for our dear friend, relative, brother priest. And so we pray: “Eternal rest grant unto him, O Lord, and let perpetual light shine upon him.”

“May his soul and the souls of all the faithful departed, through the mercy of God, rest in peace. Amen.”

A Visit with Christian Refugees from Iraq 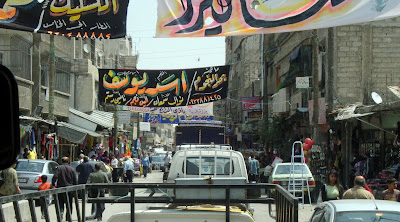 After our visit to sites of Christian origins, our CNEWA delegation travelled to a Melkite parish in Damascus where Christian refugees from Iraq receive a warm welcome, are able to take advantage of medical attention, eat at a community dining centre and socialize, sharing their disappointments and hopes. This they did with us during our hour-long exchange with them on April 10.

This week's edition of the Catholic Register contains a 12-page special section on Iraqi Christians (also available on-line at www.catholicregister.org). Some photos of our CNEWA session: 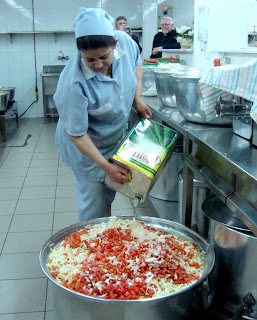 Preparing a salad for close to a thousand mouths 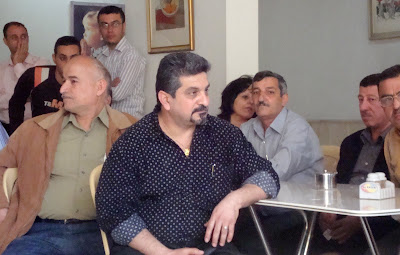 A sense of desperation is not hard to discern 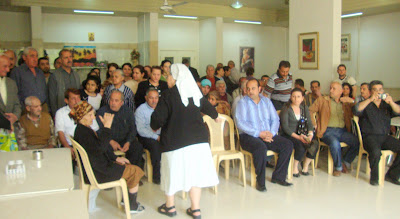 A chance to tell their story to visitors from overseas 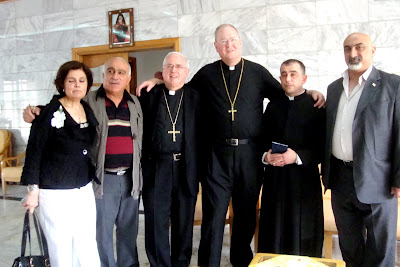 This priest accompanies his people exiled from Iraq
Posted by Archbishop Terry at 11:05 AM