Travel to Rome overnight Sunday-Monday, via Air Canada to Frankfurt and on Swiss Air via Zurich was uneventful. My first time in Switzerland in over thirty years set me to marvelling at the order and precision that is everywhere and the fluency with which the Swiss handle languages.

Besides the usual high end stores one finds in most airport shopping and duty free areas, there were the Swiss icons: "Swatch" along with other watchmakers, chocolatiers who continue to produce "Swiss chocolate" and, of course, the airline snack was a "Swiss cheese" bun sandwich.

Today, I am going to take the train with one of our Ottawa priests who works for the Holy See in Rome, Msgr. Jose Bettencourt, P.H., on pilgrimage to the Shroud of Turin (and to pray at the tomb of Blessed Piergiorgio Frassati in the Torino cathedral).

Whatever science may disclose about the Holy Shroud's origins, this devotional object reminds us of the depths of degradation that Our Lord suffered before being laid in the tomb.

Still, all Jesus’ suffering out of love was simply a prelude to the consolation that came with Christ’s resurrection: to him personally, henceforth the Lord of life and of history; to his Blessed Mother; to his apostles who had let him down; to the women disciples who had not broken faith; and to the countless little ones whom he had encountered in his ministry and whom he would encounter in the proclamation of the gospel—including through our present day labours at his side.

The remainder of today's post consists of photos of the CNEWA visit on April 11 to the Ummayad Mosque in Damascus (Pope John Paul II visited it during his visit to Syria) and photos of the blessing ceremony last Wednesday of the refurbished St. Vincent de Paul store on Wellington Street West.

The store has a sizeable budget with which it employs forty persons to work in sorting, repairing, arranging goods that are left in the StVdeP boxes near some of our churches in the Archdiocese. It was a delight to meet many of the employees, to pray briefly and to celebrate with early morning refreshments (coffee and sweets):

The Ummayad Mosque, also known as the Grand Mosque of Damascus, is one of the largest and oldest mosques in the world. Located in one of the holiest sites in the old city of Damascus, it is of great architectural importance.

After the Arab conquest of Damascus, the mosque was built on the Christian basilica dedicated to John the Baptist since the time of the Roman emperor Constantine I. The mosque holds a shrine which still today contains the head of John the Baptist (Yahya), honored as a prophet by both Christians and Muslims alike.

In 2001 Pope John Paul II visited the mosque, primarily to visit the relics of John the Baptist. It was the first time a pope paid a visit to a mosque (from Wipidedia). 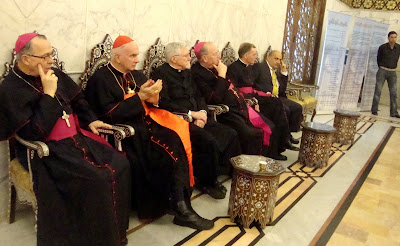 Being received in the antechamber to the majestic mosque by a representative of the Grand Mufti of Damascus, who was unavoidably absent 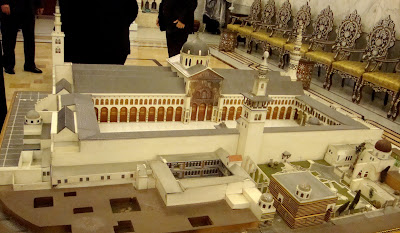 A model of the mosque complex 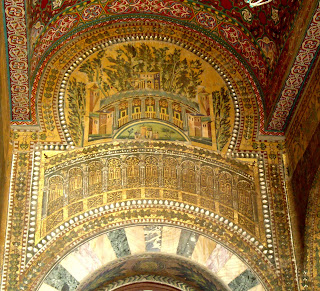 Ceiling decoration inside the entry-way 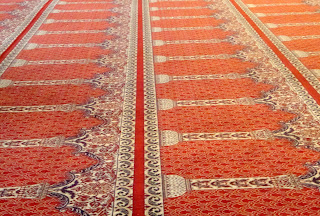 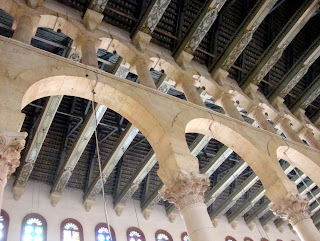 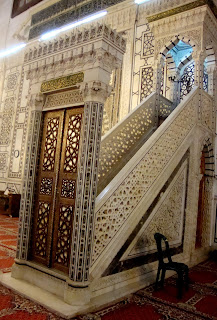 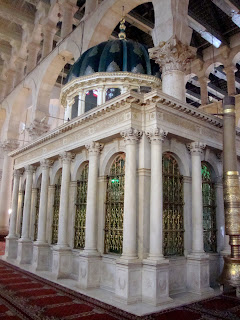 The shrine in honour of John the Baptist 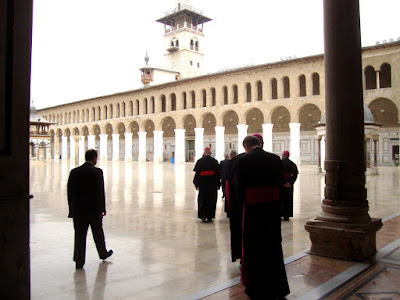 The St. Vincent de Paul Store and Its Local Outreach

CTV newscameraman agrees to be part of the photo of record

A panoramic view of the newly-blessed St. Vincent de Paul store
Posted by Archbishop Terry at 4:13 AM