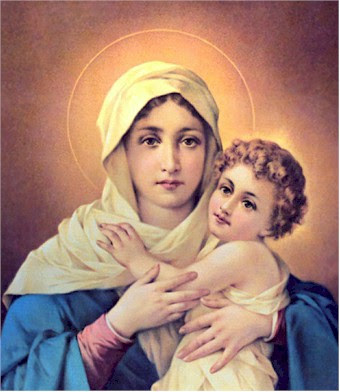 O God, who by the Immaculate Conception of the Blessed Virgin prepared a worthy dwelling for your Son, grant, we pray, that, as you preserved her from every stain by virtue of the Death of your Son, which you foresaw, so, through her intercession, we, too, may be cleansed and admitted to your presence. Through our Lord Jesus Christ, your Son, who lives and reigns with you in the unity of the Holy Spirit, one God, for ever and ever. 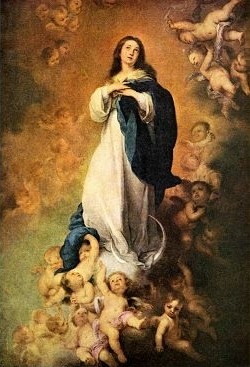 
"Hail Mary, full of grace". For thousands of centuries, millions of times per day the Virgin Mary is greeted by the faithful with the greeting of the Archangel, that we hear resonating anew in today’s Gospel. The sons of the Church learn from the words of the Archangel Gabriel that the fullness of the mystery of God’s grace was realized in Holy Mary. St Paul the Apostle teaches us that the Father made all fullness dwell in His Incarnate Son (c.f. Col 1:12-20), which overflows from Christ’s head and spills out on His Mystical Body that is the Church. Before descending in Body, Christ’s fullness was spread in a unique and unrepeatable way on Mary, predestined from eternity to be the Mother of God.

Significantly in the first reading, the liturgy recalls the figure of Eve, the mother of all the living. The Fathers of the Church saw in Mary, the new Eve that unties the knot bound by the first woman. The knot of disobedience tied by Eve, was untied by the obedience of Mary. As Eve was created in purity and integrity, also the new Eve was miraculously preserved from the contamination of original sin because she had to give humanity the Word, who was incarnated for our ransom.

Saint Irenaeus compares the virginity of the pure earth from which Adam was drawn to the virginity of the immaculate humanity of Mary from which the Second Adam was drawn. ‘And as the protoplast himself, Adam, had his substance from untilled and as yet virgin soil (for God had not yet sent rain, and man had not tilled the ground (Genesis 2:5)) so did He who is the Word, recapitulating Adam in Himself, rightly receive a birth, enabling Him to gather up Adam [into Himself], from Mary, who was as yet a virgin’ (Adversus hereses III, 21:10).

Blessed Pope Pius IX on the 8th of December 1854 proclaimed the Dogma of the faith revealed by God that the Blessed Virgin Mary "in the first instant of her conception, by a singular privilege and grace granted by God, in view of the merits of Jesus Christ, the Saviour of the human race, was preserved exempt from all stain of original sin" (Denz.-Schonm, 2083). If the official proclamation of the dogma is relatively recent, the profession of faith by Christians and the liturgy is very ancient in this regard. Furthermore, four years later the same Virgin Mary, appearing in Lourdes to St Bernadette, confirmed the truth of the doctrine by presenting herself with the title ‘I am the Immaculate Conception’.

Mary’s predestination to this singular grace—consistent with the suspension of the universal decree by which every man, from the moment of his conception is contaminated with original sin—leads us to ponder in the deepest depths the mystery of the Most Holy Trinity’s salvific plan. God, One and Triune, had foreseen from the very beginning the future incarnation of the Word culminating in the redemption of human nature that had fallen into sin. He therefore predestined pure Mary, so that He could draw from her uncontaminated humanity, which the Son could adopt in order to re-establish in Himself the original purity of creation and reorientate it to eternal glory.

For this reason, in the second reading of today’s liturgy, St Paul reminds us that God wants to see us holy and immaculate before Him. The purity of our origins seemed to be irredeemably lost. However, in Immaculate Mary, God found the perfect solution to reverse the disaster made from the misuse of our liberty, and returned humanity to the original purity that seemed hopelessly lost.

Mary’s Immaculate Conception is a direct consequence of her Divine Maternity. St Anslem of Aosta wrote: ‘Assuredly, it was fitting that the Virgin be beautified with a purity than which a greater cannot be conceived, except for God's. For, toward her, God the Father was so disposed to give His only Son who was naturally one and the same common Son of God the Father and of the Virgin.’ (De conceptu virginali et originali peccato, XVIII) 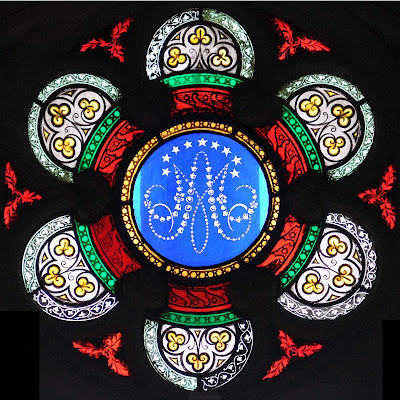 This link between the privilege of Divine Maternity and Mary’s Immaculate Conception results also in her superiority with respect to us. She is a perfect image of the Church in heaven, the new triumphant Jerusalem, that won’t have any marks nor will there be pain and death. This is why today’s preface recites: '…she was to be a worthy mother of your Son, your sign of favour to the church at its beginning, and the promise of its perfection as the bride of Christ, radiant in beauty’. Also in heaven Mary is not and will never be only a disciple, but her Son’s most exalted. She is and will always be the Mother of God, the Mother of the Church, the Queen of the Angels and Saints. Therefore, the preface of the Mass adds: ‘…You chose her from all creatures to be our advocate with you and our pattern of holiness.’

Mary was Immaculate because she had to be the Mother of God. She, herself has received the original grace of purity and the final state of the blessed life that we also, by collaborating with Divine Grace, hope one day to receive.

Immaculate Mary is full of grace. She is not only Christ’s disciple, who with the help of grace has overcome the chains of sin, but she is totius Trinitatis nobile triclinium, the noble resting place of the Holy Trinity (St Thomas Aquinas, Exposito Salutationis Angelicae, I). The Immaculate, full of grace, will always be Mother and Queen for that elect part of the Church that we hope one day to join, that will one day joyfully sing before the Almighty. [Congregation for the Clergy] 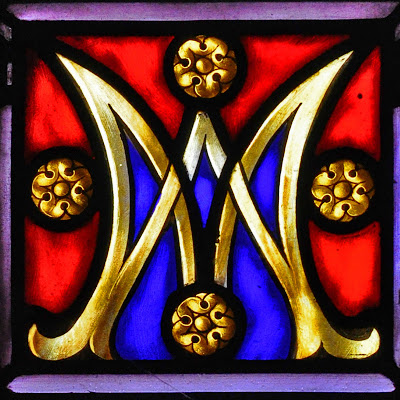 Posted by Archbishop Terry at 7:17 AM