Pope St. Damasus I, (305-384), was of Spanish descent; he summoned synods and councils, notably, the First Council of Constantinople, to defend the Church against schismatics and heretics. He widely promoted the veneration of the martyrs. It was he who commissioned St. Jerome's translation of the Bible and who changed the liturgical language from Greek to Latin.

On Pope Liberius' death, riots broke out over the election of a successor. The majority favored Damasus, who was born in Rome of Spanish descent. He had served as a deacon under Liberius and upheld the Nicene Creed.

In less than a month, Damasus was installed in the Lateran palace. A minority, however, refused to accept the decision; they set up the antipope Ursinus. As the violence continued, Emperor Valentinian, who now ruled the West, was compelled to intercede and expel the antipope.

Pope Damasus fostered the development of the Church during this period of peace by publishing a list of the books of both the Old and New Testaments. He also encouraged his longtime friend and secretary, St. Jerome, to translate the Bible into Latin. This Vulgate edition continues to serve the Church usefully. Damasus himself composed eloquent verse which he had inscribed on marble slabs and placed over the tombs of martyrs and popes alike.

But Damasus is best known for his devoted project in the catacombs. He ardently searched for the tombs of martyrs which had been both blocked up and hidden during previous persecutions. He lighted the passages and stairwells of the catacombs, encouraging pilgrimages to the martyrs. He did much to beautify existing churches, such as building the baptistery in St. Peter's and laying down marble pavement in the basilica of St. Sebastian.

Damasus was a vigorous defender of the orthodoxy, as well. He condemned the heresies of such men as Macedonius and Apollinaris and continued the march against Eastern Arians. Although Emperor Valentinian was a Catholic, his less capable brother Valens was under the Arian influence. Valens kept the Eastern bishops in turmoil until his death in 378 by the determined Goths.

Emperor Theodosius, who succeeded Valens, supported the orthodox and convened the Second Ecumenical Council at Constantinople in 381. The council settled the dispute by recondemning Arianism and adopting the pope's teachings.

The chair of St. Peter was never more respected than during the pontificate of Damasus. He tirelessly promoted the Roman primacy, successfully persuading the government to recognize the Holy See as a court of first instance, although it declined to give the pope himself any particular immunity against the civil courts.

Next in hierarchy came Alexandria, founded by St. Mark, and then Antioch, where Peter reigned before leaving for Rome.

Pious Pope Damasus died on December 11, 384 after a reign of eighteen years. — J. V. Bartlett, The Popes: A Papal History

Grant, we pray, O Lord, that we may constantly exalt the merits of your Martyrs, whom Pope Saint Damasus so venerated and loved. Through our Lord Jesus Christ, your Son, who lives and reigns with you in the unity of the Holy Spirit, one God, for ever and ever.

ANOTHER REASON FOR AN ADVENT CONFESSION

The following was picked up by CBC News last week--fascinting in its analysis of the fruits of confession in people's lives: Jesus used the same analogy of sums of money being forgiven to explain the love of the forgiven sinner (Luke 7.36-50). I wonder whether the commitment of generous giving is restricted inside the church (which the article focuses on) or giving generally.

People who recall, or even imagine, being absolved of their sins tend to donate more money to the church, according to British researchers.

"Recent evidence has suggested that people are more likely to behave pro-socially, such as helping, sharing, donating, co-operating and volunteering, when they feel guilty," said Ryan McKay, from the Department of Psychology at Royal Holloway College of the University of London.

"This raises the question of whether religious rituals of absolution, in which people are absolved of their sins and released from guilt, would actually make people less pro-social."

In a study done by the University of Oxford and Royal Holloway, published in the journal Religion, Brain and Behaviour, researchers posed the question: "If sin is a form of capital, might absolution rituals squander that capital?"

In the study, volunteers – all devout Catholics —were provided two memory tasks.

First, they were asked to remember a sin, privately, that they had committed in the past.

Secondly, they had to recall if they attended confession for this sin or, if they hadn't done it in reality, just to imagine doing so.

Each person was given an opportunity to donate to a local Catholic church by putting some money in an envelope.

The participants were divided between those whose money was collected before they remembered being absolved and those who donated after trying to make that recollection.

In addition, donations were extra generous if the person had a strong belief in divine judgment and engaged in religious activities such as praying or Bible reading.

"The results of our study suggest … that 'releasing' people from their sin has a positive pro-social effect. This indicates that the Catholic ritual of confession is an effective means of promoting commitment to the church."

Other religions, including Islam and Hinduism, also have concepts of absolution. Researchers say they would like to analyze adherents of those religions the next time around to see if the results are comparable to Catholics. 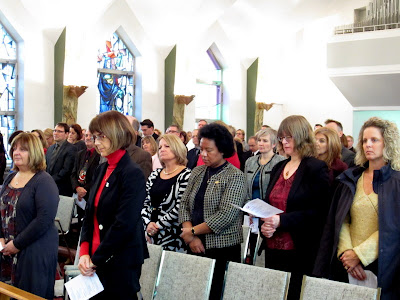 Last Wednesday, the Ottawa Catholic School Board Principals and several OCSB supervisory staff held one of their planning meetings in the Diocesan Centre.  I addressed them on the New Evangelization and the Year of Faith and celebrated Mass before the lunch break in the Chapel.

Among the questions presented by my Vicar, Father Geoffrey Kerslake, was the implementation in the English Sector of the restoration of Confirmation within the sixth grade programs in our parishes, schools and families.

Some photos from the Eucharist: courtesy Sarah DuBroy. 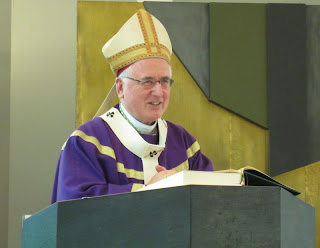 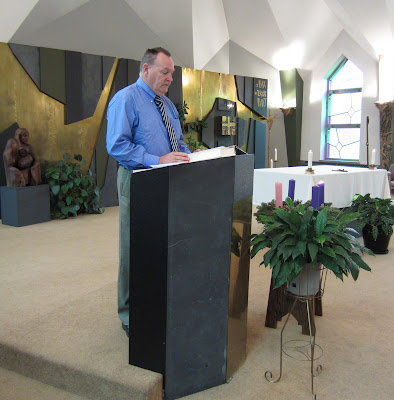 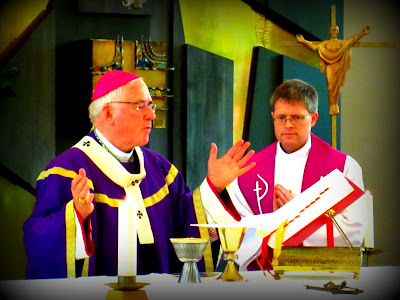 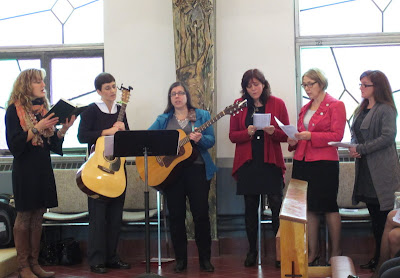 Posted by Archbishop Terry at 6:01 AM