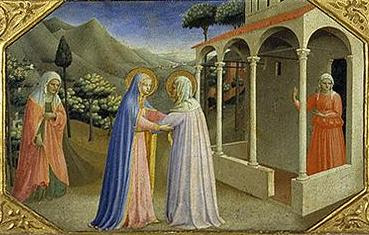 Pour forth, we beseech you, O Lord, your grace into our hearts that we, to whom the Incarnation of Christ your Son was made known by the message of an Angel, may by his Passion and Cross be brought to the glory of his Resurrection. Who lives and reigns with you in the unity of the Holy Spirit, one God for ever and ever. Amen.

THE TRUE MEANING
OF THE INCARNATION

One of this week's installments of Reading the Catechism in a Year (which has now reached 100,000 followers) explained the Incarnation, how it has been misunderstood and how it should be understood.

Here is the selection from the Catechism of the Catholic Church (#464-469) that explains the Church's coming to grips with the truths about Jesus Christ over the centuries.

To subscribe (you can always make up the days missed in the New Year), go to www.flocknotes.org.

464 The unique and altogether singular event of the Incarnation of the Son of God does not mean that Jesus Christ is part God and part man, nor does it imply that he is the result of a confused mixture of the divine and the human. He became truly man while remaining truly God. Jesus Christ is true God and true man.

During the first centuries, the Church had to defend and clarify this truth of faith against the heresies that falsified it.

465 The first heresies denied not so much Christ's divinity as his true humanity (Gnostic Docetism). From apostolic times the Christian faith has insisted on the true incarnation of God's Son "come in the flesh". But already in the third century, the Church in a council at Antioch had to affirm against Paul of Samosata that Jesus Christ is Son of God by nature and not by adoption. The first ecumenical council of Nicaea in 325 confessed in its Creed that the Son of God is "begotten, not made, of the same substance (homoousios) as the Father", and condemned Arius, who had affirmed that the Son of God "came to be from things that were not" and that he was "from another substance" than that of the Father.

466 The Nestorian heresy regarded Christ as a human person joined to the divine person of God's Son. Opposing this heresy, St. Cyril of Alexandria and the third ecumenical council, at Ephesus in 431, confessed "that the Word, uniting to himself in his person the flesh animated by a rational soul, became man." Christ's humanity has no other subject than the divine person of the Son of God, who assumed it and made it his own, from his conception. For this reason the Council of Ephesus proclaimed in 431 that Mary truly became the Mother of God by the human conception of the Son of God in her womb: "Mother of God, not that the nature of the Word or his divinity received the beginning of its existence from the holy Virgin, but that, since the holy body, animated by a rational soul, which the Word of God united to himself according to the hypostasis, was born from her, the Word is said to be born according to the flesh."

467 The Monophysites affirmed that the human nature had ceased to exist as such in Christ when the divine person of God's Son assumed it. Faced with this heresy, the fourth ecumenical council, at Chalcedon in 451, confessed:

We confess that one and the same Christ, Lord, and only-begotten Son, is to be acknowledged in two natures without confusion, change, division or separation. The distinction between the natures was never abolished by their union, but rather the character proper to each of the two natures was preserved as they came together in one person (prosopon) and one hypostasis.

468 After the Council of Chalcedon, some made of Christ's human nature a kind of personal subject. Against them, the fifth ecumenical council, at Constantinople in 553, confessed that "there is but one hypostasis [or person], which is our Lord Jesus Christ, one of the Trinity." Thus everything in Christ's human nature is to be attributed to his divine person as its proper subject, not only his miracles but also his sufferings and even his death: "He who was crucified in the flesh, our Lord Jesus Christ, is true God, Lord of glory, and one of the Holy Trinity."

469 The Church thus confesses that Jesus is inseparably true God and true man. He is truly the Son of God who, without ceasing to be God and Lord, became a man and our brother:

"What he was, he remained and what he was not, he assumed", sings the Roman Liturgy. And the liturgy of St. John Chrysostom proclaims and sings: "O only-begotten Son and Word of God, immortal being, you who deigned for our salvation to become incarnate of the holy Mother of God and ever-virgin Mary, you who without change became man and were crucified, O Christ our God, you who by your death have crushed death, you who are one of the Holy Trinity, glorified with the Father and the Holy Spirit, save us!"