Snow and Ice and Flight Delays 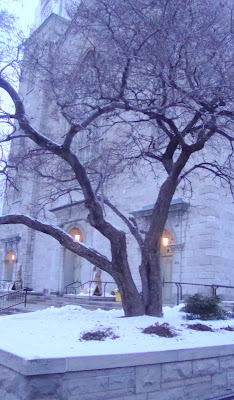 Actually, I am an afficionado of winter, except for things like the consequences of the arrival of snow and ice, such as fender-benders, flight cancellations and delays, etc.

It was brisk and cold in Toronto yesterday morning and I left so early to get to Toronto City Centre's Billy Bishop Airport that I did not check on the status of flights departing for Ottawa.  On arrival, I discovered the 10:30 flight had been cancelled, but we were soon rebooked on the 11:30 flight, heading on to Halifax and St. John's.

The winds were fierce and there was a bit of turbulence and the landing was rough, but I arrived to see the first snowfall of the season, harbinger of more delights to come.  Here are some images from around the cathedral and archbishop's residence for the record: 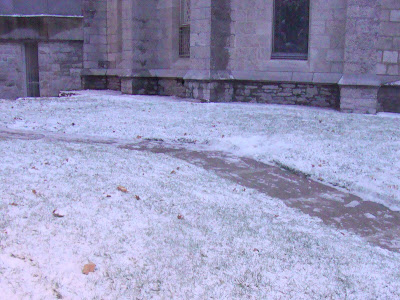 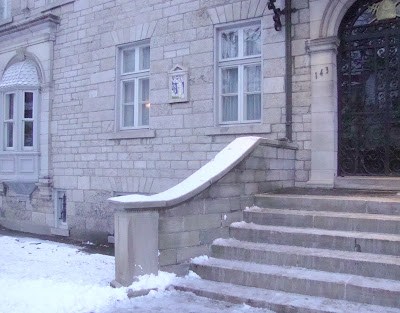 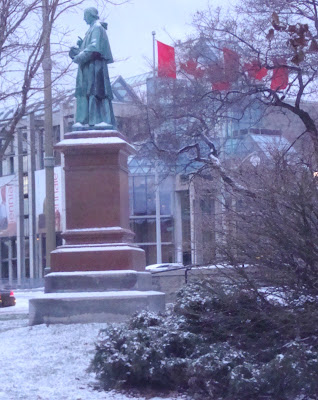 Preparing for Advent with a Wreath

As I was leaving St. Augustine's Seminary yesterday, I noticed that the Advent wreath had been hung from the ceiling at the entrance to the chapel.  The ceremony of the lighting of the Advent wreath is one of the happy memories of being introduced as a youngster to the Season of Advent. So, on my return to Ottawa and the residence yesterday afternoon, I was delighted to see the Advent wreath all set up beneath the dining-room's Madonna and Child (below). 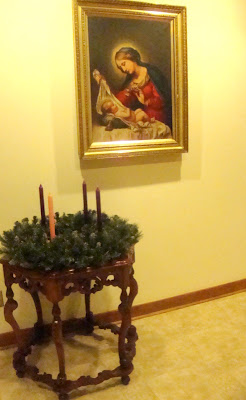 Here is some background to the origin of the Advent Wreath:

The Advent wreath originated a few hundred years ago among the Lutherans of eastern Germany. It probably was suggested by one of the many light symbols which were used in folklore at the end of November and beginning of December... The Christians in medieval times kept many of these lights and fire symbols alive as popular traditions and ancient folklore.

In the sixteenth century the custom started of using such lights as a religious symbol of Advent in the houses of the faithful. This practice quickly spread among the Protestants of eastern Germany and was soon accepted by Protestants and Catholics in other parts of the country. Recently it has not only found its way to America, but has been spreading so rapidly that it is already a cherished custom in many homes.

The Advent wreath is exactly what the word implies, a wreath of evergreens (yew or fir or laurel), made in various sizes. It is either suspended from the ceiling or placed on a table, usually in front of the family shrine. Fastened to the wreath are four candles standing upright, at equal distances. These candles represent the four weeks of Advent.

Daily at a certain time (usually in the evening), the family gathers for a short religious exercise. Every Sunday of Advent one more candle is lit, until all four candles shed their cheerful light to announce the approaching birthday of the Lord.

All other lights are extinguished in the room, and only the gentle glow of the live candles illuminates the darkness. After some prayers, which are recited for the grace of a good and holy preparation for Christmas, the family sings one of the traditional Advent hymns or a song in honor of Mary.

The traditional symbolism of the Advent wreath reminds the faithful of the Old Testament, when humanity was "sitting in the darkness and in the shadow of death" (Luke 2:79); when the prophets, illumined by God, announced the Redeemer; and when the hearts of men glowed with the desire for the Messiah.

The wreath -- an ancient symbol of victory and glory -- symbolizes the "fulfillment of time" in the coming of Christ and the glory of His birth.

In some sections of Europe it is customary for persons with the name of John or Joan to have the first right to light the candles on the Advent wreath and Christmas tree, because John the Evangelist starts his Gospel by calling Christ the "Light of the World" and John the Baptist was the first one to see the light of divinity shining about the Lord at His baptism in the Jordan. --from Fr. Francis X. Weiser, S.J., Handbook of Christian Feasts and Customs

In our St Rita's Parish in Ahuntsic, Montreal (and in our home) there was a practice of the eldest lighting the candle the first week and the youngest the next week, the next eldest, etc.  Perhaps there were too many people called John or Joan in the parish!  That was so in our house, where Dad and my youngest brother were both named John....

* * *
Blessing the Advent Wreath
(by laypersons)
O God, by whose word all things are sanctified,
pour forth thy blessing upon this wreath
and grant that we who use it may prepare our hearts
for the Coming of Christ,
and may receive from thee abundant graces.
Through Christ Our Lord.
Amen.

Blessed are you, O Lord our God, king of the universe.
You sent your Son to be the Light of the world
and to spread his light of love to all.
Bless us and accept + these wreaths of light made from our hands.
May their ever increasing brightness be a sign to us
of the approaching nearness of your Son,
that we might prepare in joy for his humble birth in a manger
and be ready to receive him at his coming again in glory;
through the same Jesus Christ our Lord, who lives and reigns
with you and the Holy Spirit, one God, now and forever.
Amen.

(From Celebrating Advent and Christmas: A Sourcebook for Families cf: Women for Faith and Family, http://wf-f.org/).

MaterCare is an organization of Catholic health professionals dedicated to the care of mothers and babies, both born and unborn, through new initiatives of service, training, research and advocacy, which are designed to reduce the tragically high rates of maternal mortality, morbidity and abortion.

MCI’s mission is to carry out the work of Evangelium Vitae (the Gospel of Life) by improving the lives and health of mothers and babies both born and unborn, through new initiatives of service, training, research, and advocacy designed to reduce the tragic levels of abortion world-wide and maternal and perinatal mortality, morbidity in developing countries.

MaterCare's founder and zealous promoter of maternal care in Ghana, Kenya, Haiti--wherever needed--Dr. Robert Walley (based in St. John's, NL) came to visit with me earlier this week, while he was in Ottawa to make presentations on protecting the gift of life, one woman and one child at a time.

It is amazing how precisely this organization's ideals and methods cohere with what Canada proposed at the G8 and G20 this summer!  And how sad that its uncompromising stance in favour of life renders it difficult to get along with government agencies infected with the virus that "reproductive health" includes contraceptives and abortion. 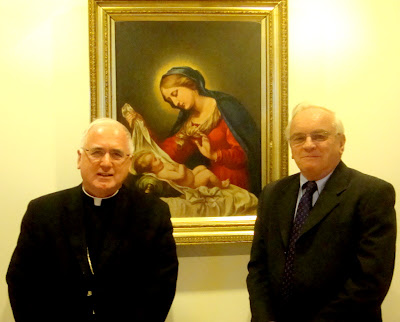 This evening's 7PM Vespers and Prayer Vigil for all Nascent Life in Notre Dame Cathedral, in solidarity with Pope Benedict XVI and the Catholic Church around the world, will remember in a particular way agencies such as MaterCare International and Birthright that assist medically and with spiritual and material resources women and men struggling to accept and treasure the gift of life in the womb.
Posted by Archbishop Terry at 6:32 AM