The Dedication of the Lateran Basilica - 5th Bishop of St. Catharines 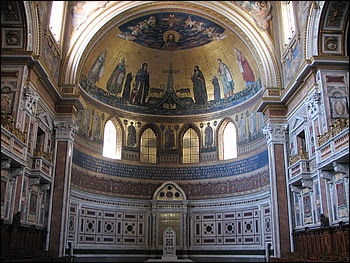 The Basilica of Saint John Lateran is the cathedral of Rome. It was built during Constantine's reign and was consecrated by Pope Saint Sylvester I in 324. This feast was later made a universal celebration in honor of the basilica called "the mother and mistress of all churches of Rome and the world" (omnium urbis et orbis ecclesiarum mater et caput) as a sign of love for and union with the See of Saint Peter.
Here is how Pope Benedict XVI explained the feast and the readings at the Angelus on this day in 2008, a Sunday:
Dear Brothers and Sisters,
The liturgy today has us celebrate the Dedication of the Lateran Basilica, called the "mother and head of all the Churches of the Urbe and Orbe". Actually, this Basilica was the first to be built after the Edict of the Emperor Constantine who, in 313, conceded to Christians the freedom to practice their religion. The same Emperor gave Pope Miltiades the ancient estate of the Laterani family and had the Basilica, the Baptistery and the Patriarchate built for him, the latter being the Bishop of Rome's residence, where Popes resided until the Avignon era.
The dedication of the Basilica was celebrated by Pope Silvester in about 324 and the temple was dedicated to the Most Holy Saviour; only after the 6th century were the names of Sts John the Baptist and John the Evangelist added, from which came its common name. This occasion initially only involved the city of Rome; then, from 1565 onwards, it extended to the entire Church of the Roman rite. Hence, honouring the holy building is meant as an expression of love and veneration for the Roman Church "which", as St Ignatius of Antioch affirms, "presides in charity" over the entire Catholic communion (cf. Epistula ad Romanos, 1, 1).
The Word of God during this Solemnity recalls an essential truth: the stone temple is the symbol of the living Church, the Christian community, that the Apostles Peter and Paul had, in their Letters, already understood as a "spiritual building", constructed by God with the "living stones" that are the Christians, upon the one foundation that is Jesus Christ, who is in turn compared to the "cornerstone" cf. 1 Cor 3: 9-11, 16-17; 1 Pt 2: 4-8; Eph 2: 20-22). "Brethren,... you are God's building", St Paul writes, and he adds, "God's temple is holy, and you are that temple" (1 Cor 3: 9c, 17).
The beauty and the harmony of churches, destined to render praise to God, invites us human beings too, though limited and sinful, to convert ourselves to form a "cosmos", a well-ordered construction, in close communion with Jesus, who is the true Holy of Holies. This reaches its culmination in the Eucharistic liturgy, in which the "ecclesia" that is, the community of baptized finds itself again united to listen to the Word of God and nourish itself on the Body and Blood of Christ. Gathered around this twofold table, the Church of living stones builds herself up in truth and in love and is moulded interiorly by the Holy Spirit, transforming herself into what she receives, conforming herself ever more to her Lord Jesus Christ. She herself, if she lives in sincere and fraternal unity, thus becomes a spiritual sacrifice pleasing to God.
Dear friends, today's feast celebrates an ever current mystery: that God desires to build himself a spiritual temple in the world, a community that adores him in spirit and truth (cf. Jn 4: 23-24). But this occasion reminds us also of the importance of the concrete buildings in which the community gathers together to celebrate God's praises. Every community therefore has the duty to carefully guard their holy structures, which constitute a precious religious and historical patrimony. For this we invoke the intercession of Mary Most Holy, so that she might help us to become, like her, a "house of God", living temple of his love.
* * *
O God, who from living and chosen stones prepare an eternal dwelling for your majesty, increase in your Church the grace you have bestowed, so that by new growth your faithful people may build up the heavenly Jerusalem. Through our Lord.
* * * * * *

Bishop Bergie to be installed 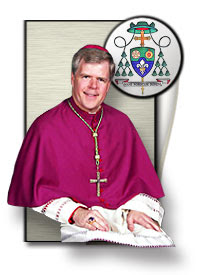 With all that is said above about the people of God being living stones and forming the Church, how appropriate that today, in St. Catharines (the diocese in which Niagara Falls and the escarpment that allows the vineyards to be fruitful are found) Bishop Gerard Bergie should gather with the faithful of his new diocese for the inauguration of his new ministry there.
Ad multos et faustissimos annos, Your Excellency!
Posted by Archbishop Terry at 6:42 AM