There are three dioceses with the name Hamilton: "Hamilton in New Zealand" founded most recently on March 6 1980; "Hamilton in Bermuda", once part of the Archdiocese in Halifax but separated from it as a vicariate on February 19, 1953 and made a diocese in 1967; and the original "Hamilton" (without attribution), founded on February 29, 1856 and whose Ninth Bishop, David Douglas Crosby, OMI will be installed this afternoon in Christ the King Cathedral (Photo: Western Star).

To our Venerable Brother, Douglas Crosby, OMI, until now Bishop of Corner Brook-Labrador, herewith appointed Bishop of Hamilton, greetings and our Apostolic Blessing.

As, by the manifest command given by the Lord to Simon Peter "Feed my sheep" (John 21, 17), in diligently carrying out the ministry of Peter We must provide with solicitude for the entire Church and for each particular Church.


Since our Venerable Brother, Anthony Frederick Tonnos, has offered his resignation from the governance of the Diocese of Hamilton, we are ardent in our desire to name another leader for this beloved flock. You, Venerable Brother, who have demonstrated in many ways your qualities of charity and prudence in carrying out the responsibilities entrusted to you, appear to us to be the appropriate person to assume the diligent guidance of this community.


Therefore, upon the recommendation of the Congregation for Bishops, We herewith, by Our Apostolic authority, release you from the bonds uniting you to the Church of Corner Brook-Labrador, and appoint and constitute you as Bishop of Hamilton, with all the rights and obligations which accompany this office according to the prescripts of Canon Law.


We ask that the clergy and the people of the Diocese of Hamilton be made aware of our decree and with willing hearts accept you as their Pastor and guardian of truth. You, Venerable Brother, are to teach the Christian faithful entrusted to your care with patience and kindness so that they, moved by your zeal and example, will show to others the mercy of the Lord through works of charity.


Finally, we invoke on your behalf, Venerable Brother and for the beloved faithful of the Diocese of Hamilton, the intercession of The Most Blessed Virgin Mary, so that your minds may be enlightened by that same Spirit through whom, by the message of an Angel she conceived Our Saviour and Universal King.


Given at Saint Peter’s in Rome, on this twenty-fourth day of September, in the year of Our Lord two thousand and ten, in the sixth year of Our Pontificate.

* * *
Yesterday, making my way to this ceremony and the following day's installation in Saint Catharines (more on that tomorrow), I met Bishop Crosby's mother from Holy Redeemer Parish, Kanata, and her brother-in-law Bill Crosby en route to the festivities. Best wishes, Bishop Doug!

On Friday, the first of what many hope will be come an annual tradition--a prayer breakfast for civic leaders and first-responders--took place at the Hampton Inn. Mayor Larry O'Brien welcomed all to the occasion; firefighters and police officers read Scripture and sang the national anthem; several ministers offered prayers in English and French and I said grace.

The guest speaker, Rick Tobias, who is director of the Yonge Street Mission in Toronto gave the address, a powerful commentary on the Parable of the Good Samaritan and how it can be read in today's Canadian context.  It was gripping.

Herewith some photos of the occasion: 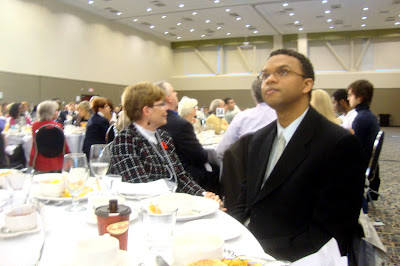 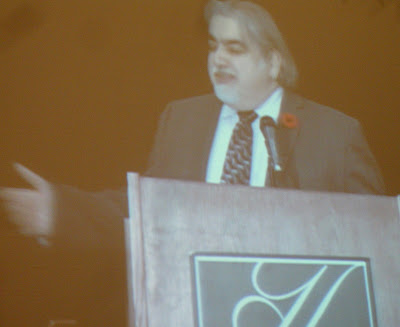 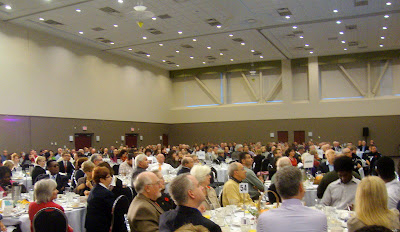 * * * * * *
NET BOARD OF DIRECTORS
Afterwards, some of us who attended the Prayer Breakfast took part in a full day meeting of the National Evangelization Team (NET Canada)'s executive board in the home of one of the members.  A demanding but worthwhile gathering: 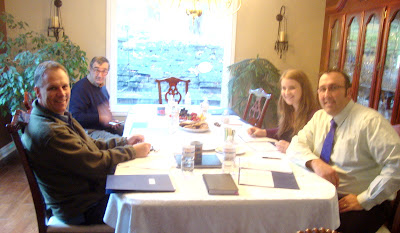 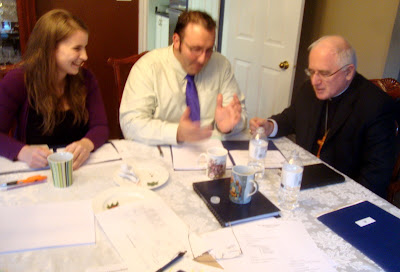 Posted by Archbishop Terry at 7:15 AM