Deborah Gyapong kindly reports on the launch of my book Living God's Word at St. Paul's University on Wednesday evening in a posting on her blog (including pictures):
Deborah Gyapong: Archbishop Prendergast's book launch

In my high school years, teachers at Loyola High School (Montreal) spoke of the three Jesuit "boy saints", St. Aloysius Gonzaga, St. Stanislaus Kostka and St. John Berchmans and held them up to us for emulation.   Each died in Rome early in the course of priestly formation but before ordination.

Best known is Gonzaga who gave up a wealthy inheritance and died as a result of tending the plague-stricken in Rome; his feast day, a memorial, occurs on June 21.

Berchmans also died as a scholastic, after his philosophy exams; his memorial on November 26 is optional outside of Jesuit communties and his native Belgium.

Also optional as a memorial, outside Jesuit houses and Poland, is today's feast of Kostka who died as a novice (i.e. even before pronouncing vows) and, like St. Anthony of Padua, is frequently depicted carrying the Christ Child.  His story:


Even though he was a Jesuit for less than a year when he died, Stanislaus Kostka (Stanislaw Kostka, 1550-1568) is known for his youthful holiness and iron determination to follow God's call despite family obstacles. He was a Polish noble by birth (his father being castellan of Zakroczym and a senator of the realm) and was destined for public life. In 1564 his parents sent Stanislaus and his older brother Paul to study at the newly opened Jesuit college in Vienna.

Initially the two young nobles boarded in the Jesuit residence at the college, but moved to the house of Senator Kimberker after seven months. Kimberker was a staunch Lutheran who would not allow a priest to enter his home with the Blessed Eucharist. That became an issue when Stanislaus unexpectedly fell ill with an undiagnosed sickness in mid-December 1565.

Stanislaus kept asking for Viaticum, but his brother put him off. Stanislaus prayed to the patron of the sodality to which he belonged, St. Barbara, to intercede with God so he could receive Viaticum before he died. He had a mystical experience of Mary visiting him and placing the Christ Child in Stanislaus' arms, which he interpreted as meaning that he was to enter the Society of Jesus.

After this extraordinary experience, the young nobleman recovered and then approached the Jesuit provincial in Vienna to ask entrance into the Society. The provincial was favorable but said that he could not accept Stanislaus without his parents' approval, which Stanislaus knew they would not give.

The determined student talked to another Jesuit who suggested he go to Augsburg, Germany to ask the provincial there, Father Peter Canisius, to accept him. Stanislaus decided to follow the suggestion and slipped out of Vienna on the morning of Aug. 10, 1567. He left behind his fine clothes and donned coarse pilgrim's robes, which hid him from his angry brother who had followed him on the road but did not recognize him dressed so poorly.

Stanislaus trudged 450 miles to Augusburg and then another day to Dillingen where Fr. Canisius had gone. He explained his desire and offered a letter of introduction from a Jesuit in Vienna. Canisius recognized his sincerity and spiritual qualities and decided to accept him. He also arranged for him to accompany two young Jesuits about to travel to Rome which was further from Poland than Germany, far enough to prevent the family from stopping Stanislaus. Kostka and the two Jesuits left Germany in late September and arrived in Rome on Oct. 25, making their way to the residence of the superior general, Father Francis Borgia.

Stanislaus gave Canisius' letter of recommendation to Borgia, who had the young man remain at the Gesú for three months before going briefly to the Roman College and then to the novitiate of Sant'Andrea. Stanislaus's novitiate would only last 10 months. In early August 1568 he had a premonition he would soon die. He became sick with a fever. Since he did not seem to be gravely ill, the brother infirmarian discounted his premonition.

On Aug. 14 Stanislaus told the infirmarian he would die the next day but the remark was not taken seriously. Later that afternoon he took a turn for the worse and lost all strength. He received viaticum and prayed with the novices and other Jesuits who were with him. About three in the morning of the feast of our Lady's Assumption on August 15, he announced that Mary was approaching with angels to take him to heaven and soon died.

Many illnesses were cured at his tomb, and his body was found incorrupt three years after his death. He was soon considered as a Saint in Italy and Poland; in 1604 he was declared Blessed and was canonized in 1726. Paul Kostka wept for long years over his mistreatment of his younger brother, and was about to enter the Society of Jesus himself in 1607, when he died suddenly on November 13th, anniversary of the discovery of the incorrupt remains of Saint Stanislaus (http://www.sjweb.info/).


* * * * * *
VISIT TO ST. PHILIP'S ORATORY AND SEMINARY, TORONTO
Last week, before attending the episcopal installations in Hamilton and St. Catharines, I visited one of the aspirants for the priesthood from our Archdiocese, Jonathan Kelly at St. Philip's Seminary in Toronto, directed by members of the Congregation of the Oratory, under the direction of Father Jonathan Robinson who, like me, is a former Montrealer.
Besides meeting with young Jonathan and seminary officials, I spoke briefly with the residential students engaged in the study of philosophy and theology, attended Solemn Sunday Vespers with Benediction of the Blessed Sacrament and, next morning, celebrated Mass for the community/Holy Family Parish.
A couple of photos: 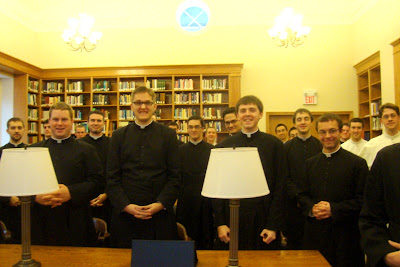 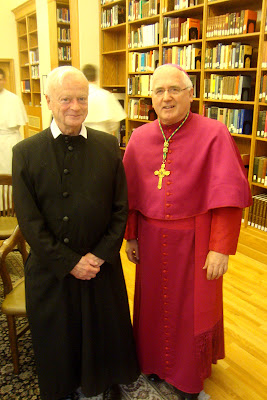