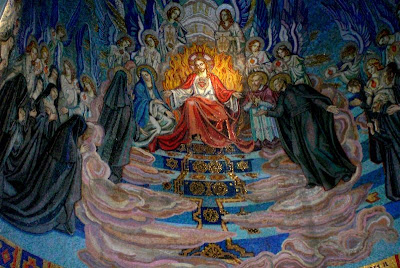 Mosaic in the Church of St. Claude La Colombiere, Paray-le-Monial, close to the Visitation Convent where St. Margaret Mary received the apparitions and message of the Sacred Heart.

The mosaic represents one of the saint's visions in which the love of the Heart of Jesus flows through all the world, through the contemplative prayers of the cloistered nuns and the preaching and teaching of members of the Society of Jesus

Today is the First Friday of the Month, a day with special significance in the Sacred Heart Devotion because of the Twelve Promises made by Our Lord to St. Margaret Mary Alococque to all those who draw near to his love and compassion symbolized by his heart "that has loved men so much but has been so little loved in return" (see especially Promise #12). 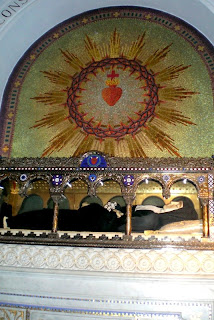 The tomb of St. Margaret Mary in Paray-le-Monial, France

1. I will give them all the graces necessary for their state of life.

2. I will give peace in their families.

3. I will console them in all their troubles.

4. They shall find in My Heart an assured refuge during life and especially at the hour of death.

5. I will pour abundant blessings on all their undertakings.

6. Sinners shall find in My Heart the source and infinite ocean of mercy.

9. I will bless the homes in which the image of My Sacred Heart shall be exposed and honored.

10. I will give to priests the power to touch the most hardened hearts.

11. Those who propagate this devotion shall have their name written in My Heart, and it shall never be effaced.

12. I promise thee in the excess of the mercy of My Heart, that its all-powerful Love will grant to all those who shall receive Communion on the First Friday of Nine consecutive months the grace of final repentance; they shall not die under My displeasure, nor without receiving the Sacraments; My Heart shall be their assured refuge at that last hour. 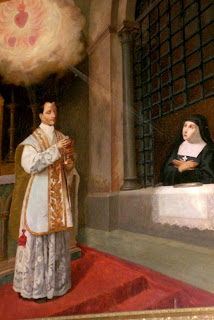 Image of St. Margaret Mary seeing in the Communion she is about to receive the mystical union of her heart with that of Christ's Sacred Heart and with the heart of St. Claude La Colombiere, her spiritual director


To mark this Year of the Priest:

A Prayer for Priests Based on the Tenth Promise

Sacred Heart of Jesus, Eternal High Priest,
let your love flow into the hearts of your priests
and transform them into living images of You.
By your grace, make them true apostles of your Sacred Heart.

I pray for the fulfilment of the promise You made to St. Margaret Mary:
"I will give to priests the gift of touching the most hardened hearts".

May your kingdom come to the hearts of all
through the ministry of holy priests.

General:
•Refugees. That the world may become aware of the plight of the millions of displaced persons and find solutions to their tragic conditions.

Missionary
•Persecuted Christians. That Christians who suffer persecution and discrimination may be granted human rights, equality, and freedom to live their faith.

On August 7, 1814 Pope Pius VII issued the Papal Bull, "Solicitudo omnium ecclesiarum," which restored the Society of Jesus to existence, reversing the decision of his predecessor, Clement XIV, 41 years earlier to suppress the Jesuits.

Pius had resolved to restore the Society during his captivity in France; and after his return to Rome he issued the Bull which gave Father Thaddeus Brzozowski, the superior general in Russia, universal jurisdiction.

From a small remnant of men in Russia, the Jesuits began a slow process of restablishing their pastoral and educational service to the Church.

Anti-clerical governments in Europe remained hostile to the Jesuits who began returning to earlier mission fields, such as India and China, and re-establishing new ones in Australia, North Africa, Japan and North America.
Posted by Archbishop Terry at 9:53 AM