Today, in Chile and in Jesuit communities around the world, this is the Feast of St. Alberto Hurtado; in Chile, in memory of his social concern for the poor, the nation observes this day as "Solidarity Day".

Last evening, I hosted ten Jesuits from West Africa and the English-speaking Canadian Province to which I belong who, in the spirit of Hurtado, and by various means and ministries strive to keep alive the concern for promoting faith in Jesus Christ and for fostering that quest for justice that Christian faith implies. A couple of photos from the gathering appear below.

As a young man in Chile, Fr. Hurtado experienced poverty when his father died and his mother was forced to sell the family farm. A scholarship allowed Hurtado to study at the Jesuit school in Santiago, and he joined the Jesuits in 1923.

The Spanish government dissolved the Society of Jesus while he was studying theology in 1932; he finished his studies in Belgium where he was ordained.

On returning to Chile, Hurtado exercised a typical Jesuit ministry of teaching and giving retreats. His concern for the poor eventually led him to become director of Catholic Action and in 1944 to ask women on a retreat to think of the men, women and children who were without a home to live in.

The women responded with donations which Hurtado used to open first a hospice for youth and then one for women and children. This was the beginning of El Hogar de Cristo. "Hogar" means home, and the name signifies that people were welcomed into Christ's home. The movement spread not only in Chile but throughout South America.

"Science and piety are the spiritual eyes of the priest.
Without one he is partially sighted, without both he is blind."
--St. Albert Hurtado S.J. 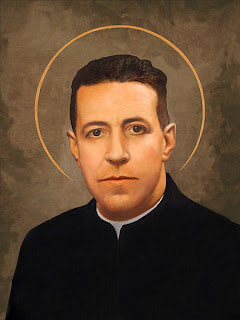 A reflection on Hurtado's life as one of love for God and neighbour:
Father Alberto Hurtado, S.J. is one of the great prophets for our contemporary social crisis. Deeply rooted in God, he proclaimed God's will that love and solidarity flourish among human beings and he denounced the injustices that make love and solidarity impossible. His works on behalf of the poor, his writings and the spiritual quality he brought to everything he did made him famous in his lifetime, and that, far beyond the narrow boundaries of his native Chile. The Jesuit Father General, John Baptist Janssens, who had been his superior during his student days at Louvain, sought his collaboration in writing the well known "Instruction" on the Social Apostolate of the Society (1949).

In 1936 he began his priestly ministry in Chile. He was a distinguished educator, National Advisor to the youth of Catholic Action, spiritual director, promoter of religious vocations, social apostle, and pastoral whirlwind. The works for which he is best known are Hogar de Cristo (Christ's Hearth) (1944), a refuge for homeless people which is still going strong, the Association of Trade-Unions of Chile (ASICH, 1947), the review Mensaje (1951), a review which is still published by the Jesuits of Chile.

His death from cancer on August 18, 1952, stirred the whole country. The parliament held a special session in his honour, a tribute repeated a number of times since. His feast day, August 18, has been legally declared "Solidarity Day." At his beatification in Rome, on October 16, 1994, the Eternal City welcomed thousands of Chilean pilgrims, including the President of the Republic and the leading authorities of the nation.

The life of Father Hurtado is the life of a man passionately in love with Jesus Christ. His works and his writings make this abundantly clear. Here, for example, is a paragraph from his personal notes: "Full of trust, let me seek to be stripped of all affection, desiring only Jesus, nothing but Jesus, confident that it is Jesus who wants this more than I do C and even without taking into account the consolation that Jesus gives."

To a young Jesuit who asked him what subject he should consider most important in his course of studies, he answered, "specialize in Jesus Christ!" His own life was nothing but this. In order to follow Jesus Christ, while still a student in secondary school, he devoted himself to serving the inhabitants of a particularly wretched barrio of Santiago. Eager to do battle at Jesus' side, he turned his law studies at the Catholic University and his youthful political militancy into instruments of justice. Once he became a Jesuit, he consecrated his whole life to Jesus. He placed himself in the hands of Jesus Christ as an apostle; this explains why he worked with such enthusiasm, initiative, joy and creativity. 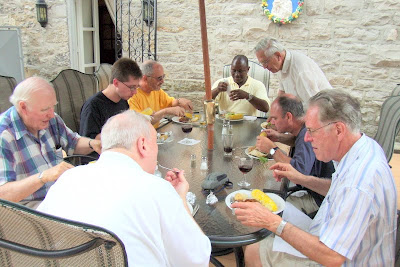 Everything Father Hurtado accomplished was an expression of his boundless love of Jesus Christ. His activity was not so much the cause of his sanctity as its radiance.

Such an expansive love of God could not fail to find expression in love of neighbour. Already in his youth he gave evidence of an affectionate and responsible personality. He took on the care of his mother who was widowed when Alberto was five years old. He delayed his entrance into the Society of Jesus until he was able to provide a secure future for her. He was loved by his friends for his cheerfulness and goodness. In his student days, his pastoral involvement already showed his concern for the alleviation of the suffering of others. The papers he wrote in pursuit of his bachelor and licentiate degrees in law were projected legal solutions of grave contemporary problems of social injustice.

As a Jesuit he was consumed by a drive to serve everybody in a breathtaking variety of good works. But what is remarkable is that every individual with whom he dealt on a day to day basis had the sense of being the only one Father Hurtado was concerned with. For him there were no masses or numbers, only persons. He called all the people he met "patroncitos" (little bosses) C God, of course, was "el patrón" (the Boss). 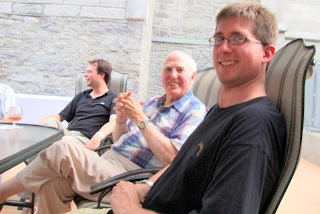 However, as often happens with disciples of Jesus Christ, he was a controversial figure. There were those who considered him imprudent because of his social commitment; there were those who expected him to support actively the Conservative Party, the familiar political bailiwick of Catholics; there were Jesuit companions who criticized his excessive activity on the grounds that it prevented him from joining in community recreation. Father Hurtado never held a grudge against his detractors.

His love of neighbour gave him the ability to overcome his own feelings of repugnance. He made his rounds gathering the young boys who lived among the trash heaps under the bridges of the Mapocho and he gave them fatherly love. With the same delicate tact he sought to help drunkards, in whom, as he himself said, he found it especially difficult to see the face of Christ.

Father Hurtado's social work sprang from his love of neighbour. In every human being he saw a person endowed with dignity. Thus, he treated everybody with respect, including those who did not consider themselves worthy of it. After welcoming the children and the tramps to the Hogar de Cristo, he would sincerely ask their pardon for not being able to offer them more than a bed and a bit of food. Through this gesture, some of his guests were brought to the realization, for the first time in their lives, that they had a rich gift to give to society which had cast them aside: their forgiveness. In this way, they started on the road to a new life as fully aware children of God and brothers of all human beings.

This inseparable love of God and neighbour made Father Hurtado an exemplary man of the Church. In his book, Humanismo Social, he wrote: "The Church is not an official institution, a purely bureaucratic structure; it is Christ extended and living among us. If we ask the Church how it understands itself, it will tell us that it is the visible manifestation of the supernatural, of the divine, the new reality given us by Christ, the divine in earthly wrappings." (p.84)

In some private notes he said: "Jesus Christ is the head; my brothers and sisters and I are members of his body. Between Him and us there is a shared life; the life of the head is the life of the members."

Father Hurtado called the Church "the great We" because everyone ought to have the sense of being an active part of it. It is one only body and yet personal differences are respected. He liked to compare the Church to a symphony.

Father Hurtado's love of the Church was above the tensions he had to cope with in it. An example was when he stepped down as advisor to Catholic Action. He felt obliged to resign because of the hostility of the Auxiliary Bishop of Santiago, his immediate superior, who had been his fellow student at the university. It was a very painful situation for him.

Once he left the work, which he had brought to its highest effectiveness and importance in the history of Chile, he would not permit any expression of solidarity towards himself. He was aware that such a manifestation could stir up attacks on the hierarchy. He forbade the mass resignations which the Catholic Action youth wanted to present, because that would have decapitated this apostolic body. Nor would he stand for any statement that would offend the person who had been his friend and now exercised ecclesiastical authority.
Posted by Archbishop Terry at 8:30 AM