Marian Sanctuary of Montenero; off to Rome

Not far from Quercianella is the Marian Shrine of Our Lady of Montenero (the black mountain: so described because of the thickness of the timber stands that cover the hillsides and possibly also because of the brigands and pirates who hid out in the caves after attacking unsuspecting travellers or ships in the nearby harbour of Livorno).

The Superior Sister Daria drove several of the house guests, including Fr. Geoff Kerslake and me the eight kilometers up the hill to the holy spot where a peasant, having been informed in a dream of the location of a miraculous icon of the Virgin Mary and Child Jesus, found it in a field and brought it to the nearby mountain top where a shrine was built. 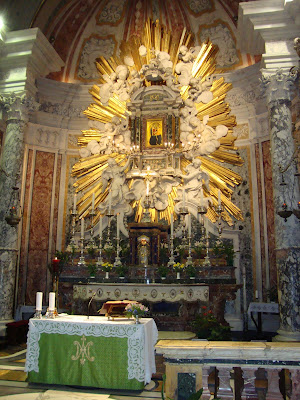 The complex of theShrine of Our Lady of Grace, elevated to the rank of Basilica and maintained by the Vallombrosa monks, is devoted to Our Lady as the patron of Tuscany; it also includes a rich gallery of votive offerings for favours received.

The Sanctuary of Montenero is an architectural complex of ancient origin: a popular legend tells the story of a shepherd with a limp, in 1345, who found a painting of the Virgin Mary at the foot of the hill and had a vision through which he was driven to carry the effigy up to the top of the hill. When he arrived at the top of the hill, it had cured him of his illness.

To commemorate this, a small Chapel was built at the beginning of the road that leads to the shrine dating back to 1603 and was replaced in 1956 by a larger church.

The fame associated with that event was so great, that already at the end of that century, many pilgrimages allowed for the extension of the first oratory, given initially by the Third Order Franciscan monks then by the Gesuati (an order that flourished between the 15th and 17th centuries), and then by another religious congregation, the Theatines (17th and 18th centuries).

After the suppression of religious orders by Pietro Leopoldo, the sanctuary fell into ruin, until Ferdinand III came to power and it was entrusted to the Vallombrosian monks in 1792, who carried out some restoration and continue to direct the shrine today. 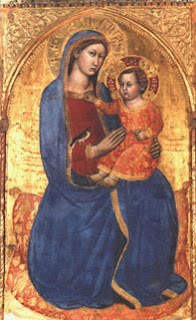 The icon of Montenero is very attractive, especially the presence of a little bird on the arm of the Blessed Mother. The iamge, attributed to the School of Pisa depicts the Virgin dressed in red with a blue cloak with the inscription "Ave Maria Mater Christi" (Hail Mary, Mother of Christ) around her head.

Her face is leaning down toward the Christ Child in her lap; his little hands are tightly clinging to his mother's clothing while holding a thread which delicately ties a little bird to Mary's arm, almost as if to indicate that faith is like a thread that draws salvation from Christ with whom devotion to the Madonna keeps us united, an interpretation given by shrine literature.

An interpretation given locally by some of the women in our party is that Mary points the "little ones", represented by the bird, towards Christ. As by thread, the believer is only lightly bound and can always flee the relationship. But the tenderness of Mother and Child invites us to abide in the circle of love and devotion.

Departure from the Seacoast for Roman Meetings

After several refreshing days by the sea, I was sent off by Suor Daria and a couple of the residents. Now the meetings begin. The next report will be from Rome, but meantime, one last image of the joys of frolicking at seaside: 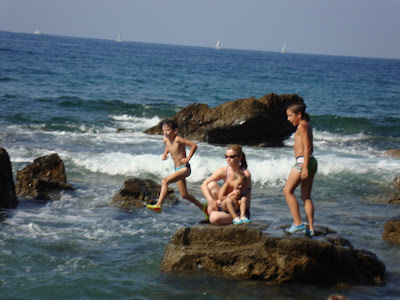 Posted by Archbishop Terry at 3:40 AM