St. Monica and St. Augustine on our heavenly homeland; the Vox Clara gathering 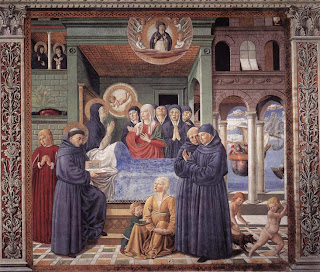 This is a marvellous depiction of the death of St. Monica in the presence of Augustine and the entourage of family and friends at the Port of Ostia (the old port of Rome now silted up and in disuse for centuries) as they prepared to leave for Tagaste in North Africa. Today and tomorrow we celebrate the mother who prayer for her husband and son's conversions and the son who is the first modern writer in the sense of being introspective and extrordinarily self-aware.

After his baptism, Augustine and Monica went to Ostia to prepare for their journey home. Before they could go, Monica became very ill. In the center of the picture, we see St. Monica on her deathbed,with Augustine standing by her side. Alypius is also there.

Augustine tells us that just before Monica died, he and his mother “stood leaning against a window which looked out on a garden” (9.10.23) and at that time they had a mystical vision of That Which Is.

If you look in the upper left hand corner of the picture, you’ll see Monica and Augustine looking out of that window over the garden, as though their mystical vision included the events in the rest of the picture as well.

On the right, you’ll see a ship, and you can just make out the two haloed figures of Augustine and Alypius. Once more Augustine sails away without her, but now because she has died. We also see a woman with some children in the foreground. Augustine tells us that he had met many of the local Christians in Ostia, who comforted him (Confessions IX.11.31).

The ancient ruins of Ostia (near the Rome airport) have been excavated by archaeologists, and one can walk--as I have on a couple of occasions--the same streets that Augustine must have walked.

The following passage is one of the first pieces of Latin Christian literature I recall translating during my noviceship in Guelph in 1962 or 1963 (I had been acquainted with the classical Latin writings of Caesar, Vergil, Horace and Catullus in high school studies). It still reverberates in my soul when I read it on this feast day of Monica.

Because the day when she was to leave this life was drawing near – a day known to you, though we were ignorant of it – she and I happened to be alone, through (as I believe) the mysterious workings of your will.

We stood leaning against a window which looked out on a garden within the house where we were staying, at Ostia on the Tiber; for there, far from the crowds, we were recruiting our strength after the long journey, in order to prepare ourselves for our voyage overseas.

We were alone, conferring very intimately. Forgetting what lay in the past, and stretching out to what was ahead, we enquired between ourselves, in the light of present truth, into what you are and what the eternal life of the saints would be like, for Eye has not seen nor ear heard nor human heart conceived it. And yet, with the mouth of our hearts wide open we panted thirstily for the celestial streams of your fountain, the fount of life which is with you.

This was the substance of our talk, though not the exact words. Yet you know, O Lord, how on that very day, amid this talk of ours that seemed to make the world with all its charms grow cheap, she said, “For my part, my son, I no longer find pleasure in anything that this life holds. What I am doing here still, or why I am still here, I do not know, for worldly hope has withered away for me. One thing only there was for which I desired to linger in this life: to see you a Catholic Christian before I died. And my God has granted this to me more lavishly than I could have hoped, letting me see even you spurning earthly happiness to be his servant. What am I still doing here?”

What I replied I cannot clearly remember, because just about that time – five days later, or not much more – she took to her bed with fever. One day during her illness she lapsed into unconsciousness and for a short time was unaware of her surroundings. We all came running, but she quickly returned to her senses, and, gazing at me and my brother as we stood there, she asked in puzzlement, “Where was I?”

We were bewildered with grief, but she looked keenly at us and said, “You are to bury your mother here”. I was silent, holding back my tears, but my brother said something about his hope that she would not die far from home but in her own country, for that would be a happier way.

On hearing this she looked anxious and her eyes rebuked him for thinking so; then she turned her gaze from him to me and said, “What silly talk!”

Shortly afterwards, addressing us both, she said, “Lay this body anywhere, and take no trouble over it. One thing only do I ask of you, that you remember me at the altar of the Lord wherever you may be”.

Having made her meaning clear to us with such words as she could muster, she fell silent, and the pain of the disease grew worse.

What is this Vox Clara body anyway?

The Vox Clara Commission was struck in April 2002 to assist the Congregation for Divine Worshop and the Discipline of the Sacraments (CDW) in the oversight of a new translation of the Third Edition of the Messale Romanum (Roman Missal) into English and began sessions shortly thereafter.

There are representative bishops from around the Catholic world: Australia, Africa (Ghana), Canada, the Caribbean (St. Lucia), India, Ireland, the United Kingdom and the United States. Originally, a representative was named from the Philippines but the long distance and timing of meetings made it impossilbe for the bishop to attend.

In 2003, I was invited to represent Canada and have enjoyed these free-wheeling exchanges. A former teacher of Latin and Greek, I marvel at the skill these bishops have with complex Latin from the Church's patrimony as we struggle with understanding and interpreting the missal's theologically and biblically rich texts as we cooperate wiht CDW staff and the International Committee on English in the Liturgy (ICEL) in intrepeting the key guidelines set out in Liturgiam authenticam (2001), the Ratio Translationis(Translation Principles) for the English Language and other ecclesial pointers (such as the Holy Father's own decision that "pro multis" in the words of consecration over the chalice would be translated as "for many" rather than by the current explanatory translation "for all"), etc.

Some samples of the mandates given to Conferences of Bishops, ICEL and Vox Clara by Liturgiam authenticam (Authentic Liturgy):

The Latin liturgical texts of the Roman Rite, while drawing on centuries of ecclesial experience in transmitting the faith of the Church received from the Fathers, are themselves the fruit of the liturgical renewal, just recently brought forth. In order that such a rich patrimony may be preserved and passed on through the centuries, it is to be kept in mind from the beginning that the translation of the liturgical texts of the Roman Liturgy is not so much a work of creative innovation as it is of rendering the original texts faithfully and accurately into the vernacular language. While it is permissible to arrange the wording, the syntax and the style in such a way as to prepare a flowing vernacular text suitable to the rhythm of popular prayer, the original text, insofar as possible, must be translated integrally and in the most exact manner, without omissions or additions in terms of their content, and without paraphrases or glosses. Any adaptation to the characteristics or the nature of the various vernacular languages is to be sober and discreet (no. 20).

Since liturgical texts by their very nature are intended to be proclaimed orally and to be heard in the liturgical celebration, they are characterized by a certain manner of expression that differs from that found in everyday speech or in texts intended be read silently. Examples of this include recurring and recognizable patterns of syntax and style, a solemn or exalted tone, alliteration and assonance, concrete and vivid images, repetition, parallelism and contrast, a certain rhythm, and at times, the lyric of poetic compositions. If it is sometimes not possible to employ in the translation the same stylistic elements as in the original text (as often happens, for example, in the case of alliteration or assonance), even so, the translator should seek to ascertain the intended effect of such elements in the mind of the hearer as regards thematic content, the expression of contrast between elements, emphasis, and so forth. Then he should employ the full possibilities of the vernacular language skillfully in order to achieve as integrally as possible the same effect as regards not only the conceptual content itself, but the other aspects as well. In poetic texts, greater flexibility will be needed in translation in order to provide for the role played by the literary form itself in expressing the content of the texts. Even so, expressions that have a particular doctrinal or spiritual importance or those that are more widely known are, insofar as possible, to be translated literally (no. 59). 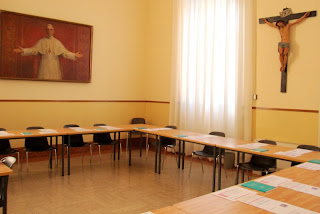 The meeting room at the Pontifical North American College where Vox Clara sessions are being held. 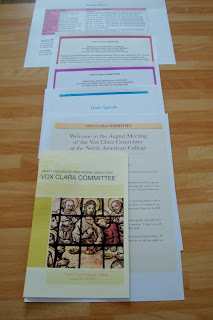 The agenda items for our meeting: enough to last four days 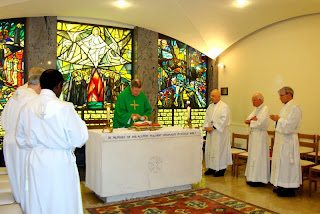 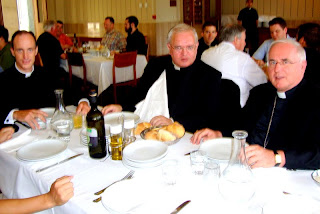 End Date 2010?
We are now nearing the end of the project and it remains to be seen whether the project can be completed in early or late 2010. That is our fondest wish and firm hope.
Posted by Archbishop Terry at 2:00 AM