Catholic Bible Dictionary; the Queenship of Mary: the Feast and the Community 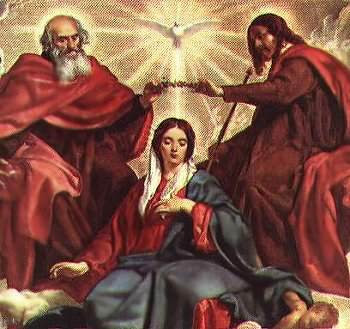 While reflecting on the Assumption last Saturday and today's feast of Mary's Queenship (represented by her coronation, the rosary's fifth Glorious Mystery), I had been browsing through the new Catholic Bible Dictionary, edited by Scott Hahn (Toronto: Doubleday, 2009; Cdn $55).

It is a marvellous piece of work, unabashedly showing the links with Catholic teaching and our understanding of how the biblical mysteries have become present in the life of the Church for two millennia (there are citations from conciliar documents and the Catechism of the Catholic Church. The presentations are invariably positive and uplifting as yoy may see from this overview treatment of Mary, the Mother of our God and Saviour Jesus Christ:

Mary, the Mother of Jesus The virgin wife of Joseph of Nazareth and the mother of the Davidic Messiah, Jesus Christ. Having accepted the exalted vocation, she became the ideal mode of Christian faith and discipleship (Luke 1:38, 45; 8:21; 11:28). More than any woman in history, Mary is one for whom God has done “great things” (Luke 1:49).

What particularly struck me was the following treatment of the role of the biblical king's mother (the queen mother) as a guide to understanding Mary's role in interceding for us members of the Lord's Kingdom of Heaven:

The Queen Mother in the Biblical World 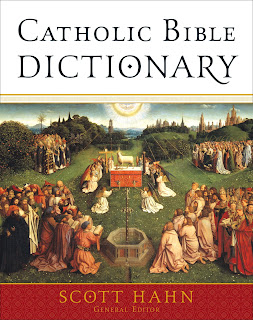 Mary is often hailed as Queen in the spiritual and liturgical traditions of the Church. The basis of this tradition, of course, lies in her relation to Christ the King.

But why is the Queen of the New Covenant the mother of the King and not the wife of the King, as so many queens have been through the centuries? The answer lies in the biblical institution of queenship in Israel.

Beginning in the time of Solomon, the Davidic monarchs of Judah imitated their Near Eastern neighbors by reserving the office of queenship to the mother of the king. This, in part, was a practical decision in a world where distinguished and wealthy men commonly possessed multiple wives. This meant that the king’s mother was not simply honored in a stately way, but she was a royal court official, an actual government figure who often wielded significant authority in ancient Oriental kingdoms.

This background is important when we read the NT, for Mary is the mother of Jesus, the royal Messiah (Matt 1:1 16) who was destined before his birth to sit on David’s throne (Luke 1:32 33; cf. Acts 2:30 36). In other words, it is the Davidic kingship of Jesus that establishes the maternal Queenship of Mary.

Perhaps the clearest indication of Mary’s Queenship is in the book of Revelation. In the vision of chapter 12, the mother who gives birth to the Messiah appears with “a crown of twelve stars” (Rev 12:1). Clearly she is a queen and a mother.

But just as important, the newborn Messiah is identified as a Davidic king “who is to rule all the nations with a rod of iron” and who is taken up to his “throne” (Rev 12:5, alluding to the anointed king from David’s line in Ps 2:8 9). Some might think it odd for a queen to give birth to her king; however, the notion of a Queen Mother is exactly what we find in the Davidic monarchy of biblical Israel.

And because Christ is the reigning Davidic Messiah, his Mother too wears the crown of Queenship in the new Kingdom of God.

The Queenship of Mary, an aspiring religious community of women 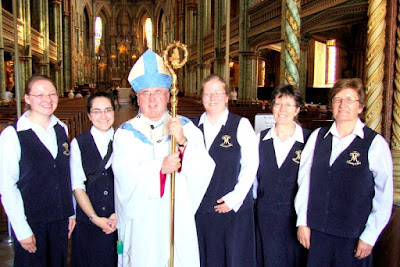 Under the guidance of Alice Fougere from Halifax, Nova Scotia a small group of dedicated women has begun living a common life in Ottawa, with the hope of eventually becoming a community of apostolic life.

Canonically speaking, there are several stages to the process and they hope soon to be recognized by the Archdiocese and formally begin living their vision of serving the church together. They have an interim uniform (seen above following the Mass of the Assumption), which they hope to trade in soon for a religious habit. They have devoted their ideal under the name of "The Queenship of Mary".

May they celebrate this day with joy under the protective mantle of Our Lady!

Lighter Blogging
This coming week I will be in Rome for the latest session of the Vox Clara Committee; posting will be less frequent.

Prayers for all from the Eternal City!
Posted by Archbishop Terry at 8:55 AM