St. Andrew Kim & Companions, Martyrs of Korea - Opening of the Law Courts and The Red Mass

This first native Korean priest was the son of Korean converts. His father, Ignatius Kim, was martyred during the persecution of 1839 and was beatified in 1925. After Baptism at the age of 15, Andrew traveled 1,300 miles to the seminary in Macao, China. After six years he managed to return to his country through Manchuria. That same year he crossed the Yellow Sea to Shanghai and was ordained a priest. Back home again, he was assigned to arrange for more missionaries to enter by a water route that would elude the border patrol. He was arrested, tortured and finally beheaded at the Han River near Seoul, the capital. Paul Chong Hasang was a lay apostle and married man, aged 45.

Christianity came to Korea during the Japanese invasion in 1592 when some Koreans were baptized, probably by Christian Japanese soldiers. Evangelization was difficult because Korea refused all contact with the outside world except for bringing taxes to Beijing annually. On one of these occasions, around 1777, Christian literature obtained from Jesuits in China led educated Korean Christians to study. A home Church began. When a Chinese priest managed to enter secretly a dozen years later, he found 4,000 Catholics, none of whom had ever seen a priest. Seven years later there were 10,000 Catholics. Religious freedom came in 1883.

When Pope John Paul II visited Korea in 1984 he canonized, besides Andrew and Paul, 98 Koreans and three French missionaries who had been martyred between 1839 and 1867. Among them were bishops and priests, but for the most part they were lay persons: 47 women, 45 men.

Among the martyrs in 1839 was Columba Kim, an unmarried woman of 26. She was put in prison, pierced with hot tools and seared with burning coals. She and her sister Agnes were disrobed and kept for two days in a cell with condemned criminals, but were not molested. After Columba complained about the indignity, no more women were subjected to it. The two were beheaded. A boy of 13, Peter Ryou, had his flesh so badly torn that he could pull off pieces and throw them at the judges. He was killed by strangulation. Protase Chong, a 41-year-old noble, apostatized under torture and was freed. Later he came back, confessed his faith and was tortured to death.

Today, there are almost 4.7 million Catholics in Korea.

Comment: We marvel at the fact that the Korean Church was strictly a lay Church for a dozen years after its birth. How did the people survive without the Eucharist? It is no belittling of this and other sacraments to realize that there must be a living faith before there can be a truly beneficial celebration of the Eucharist. The sacraments are signs of God's initiative and response to faith already present. The sacraments increase grace and faith, but only if there is something ready to be increased.

Quote: "The Korean Church is unique because it was founded entirely by lay people. This fledgling Church, so young and yet so strong in faith, withstood wave after wave of fierce persecution. Thus, in less than a century, it could boast of 10,000 martyrs. The death of these martyrs became the leaven of the Church and led to today's splendid flowering of the Church in Korea. Even today their undying spirit sustains the Christians in the Church of silence in the north of this tragically divided land" (Pope John Paul II, speaking at the canonization). [www.americancatholic.org/saintoftheday] 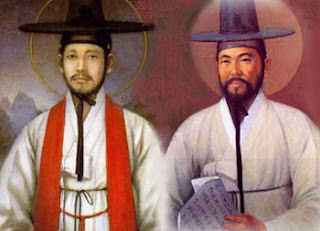 O God, who have been pleased to increase your adopted children in all the world, and who made the blood of the Martyrs Saint Andrew Kim Tae-gon and his companions a most fruitful seed of Christians, grant that we may be defended by their help and profit always from their example. Through our Lord Jesus Christ, your Son, who lives and reigns with you in the unity of the Holy Spirit, one God, for ever and ever.

This is the season of the opening of the Law Courts (this afternoon here in Ottawa). So, the annual Red Mass, sponsored by the Thomas More Society, took place earlier this week, on Tuesday afternoon. Here are photos taken on the occasion by Robert DuBroy (with the exception of the 2nd and 3rd, taken by Paul Lauzon): 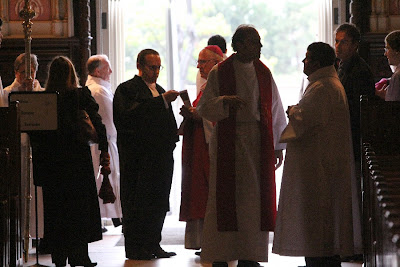 My dear brothers and sisters in Christ,

Why are you here this evening? I would like to think that each of you is here because you are an integrated Catholic. Your faith informs everything you do and everything you do gives glory to God. You could be a hundred other places this evening, but you chose instead to come here, to worship, and to receive a blessing. A blessing is a pronouncement over your life that you come into your destiny: that God’s perfect plan for you be realised in home life, health, and career. You’ve come to the right place! 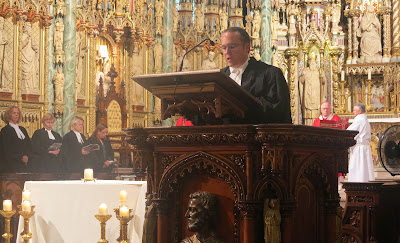 Steve Covey is known for his book on the seven habits of highly effective people. One of those habits is to “Sharpen the saw.” He wrote that you can’t use a tool, like your saw or your mind, day in and day out without some maintenance, a time of refreshing. Tonight, you are sharpening the saw, and I am grateful that you are here. 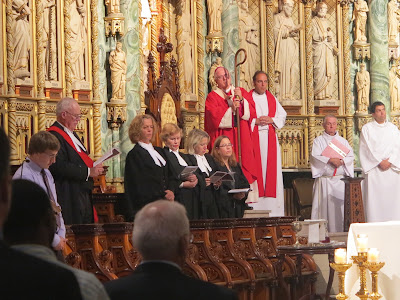 The Red Mass, as you know, is a special ceremony for judges, attorneys, law school professors, students, and government officials. You have a high calling. Your decisions have a huge impact on people’s lives, sometimes life itself. The consequences of your decisions reach into future generations. It is no exaggeration to say that you need the wisdom of Solomon.

You deal with difficult questions. Do we punish or rehabilitate convicts? Why is a mother’s womb now the most dangerous place on earth? What is a just war? Should public policy encourage or discourage the traditional family model? What do we do when rights conflict with freedoms? Should the state encourage our children to experiment sexually? You must tease out crooked logic and get to the heart of each matter. This is something in which God specialises, if only you will listen to his still, small voice, rather than the cacophony of the world. 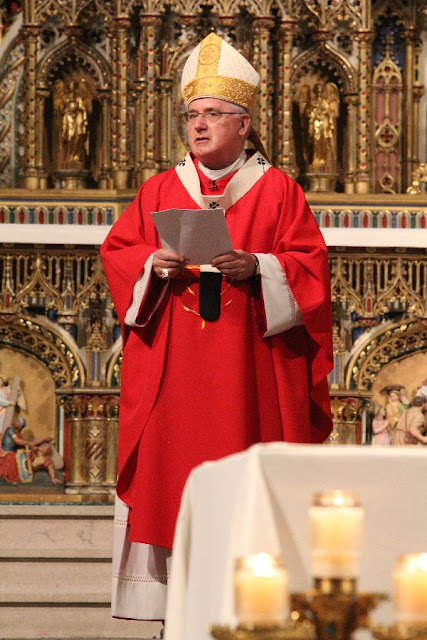 We call this the Red Mass because of the red vestments traditionally worn to symbolise the tongues of fire—the Holy Spirit—that descended on the Apostles at Pentecost (Acts 2.1–4). In our first reading, Paul writes about the vocations in the Church that the Holy Spirit inspired at Pentecost and, I might add, at your baptism. By God’s grace, I have been called to the apostolic role. What is your calling? Prophet? Teacher? Miracle worker? Healer? Helper? Administrator? Communicator?

Paul says that you are a member of the Body of Christ, his holy Church. Bear in mind that you don’t just go to church. You are Church. 24/7. God does not want to be sovereign in your life only for an hour on Sunday mornings. He wants to walk with you every minute of every day. The gifts of the Holy Spirit are not just operative in church buildings. They are gifts he has given you in the service of your professional and family life. 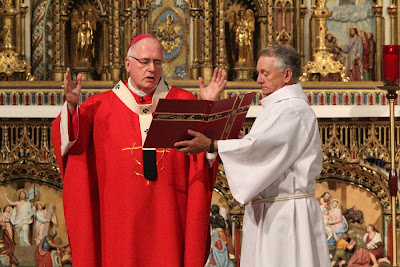 Thomas More knew this. He is an excellent example of someone who used his God-given gifts to serve his family, his country, and the Church. As the patron saint of civil servants, court clerks, lawyers, politicians, and statesmen, he is a model of putting truth above expediency or self-interest. Despite his brilliance, or perhaps because of it, he humbled himself before his Lord, taking every opportunity to pray. Yet he was a prolific writer, an energetic servant of the throne, and a loving husband and father. Here was a man who knew how to sharpen his saw.

God gave him the courage of his convictions. He gave up his life to uphold the truth. The red we wear also reminds us of his martyrdom.

Saint Thomas More is also the patron of widowers and difficult marriages. Practitioners of family law would do well to ask his intercession!

Today’s Gospel tells of a widow whose only son has died. Imagine two crowds colliding at the gates of a city called Naim. One is the dead man’s funeral procession, on its way out of the city to the cemetery. The other is Jesus’ entourage, on its way into the city. A miracle would give Jesus the credibility to minister to the people of Naim.

Mothers tug at Jesus’ heart. This mother now had no husband or son to sustain her. Maybe Jesus’ thoughts flashed forward to when Mary, also a widow, would have to get by without him. He had compassion on the mourning mother. Not just mercy, but a deep, gut-level suffering with her. In this same verse—verse 13—Luke calls Jesus “Lord” without quoting someone else for the first time. The Greek word for Lord—kyrios—means supreme authority.

Jesus touched the coffin, which was probably a plank or an open wooden box. This prefigured the wood of his cross. Apparently a conveyance of death, God can imbue wood with his power to give life.

Jesus uses his divine authority to say, “Young man…arise.” This is one of many confirmations of Jesus’ divinity, because only God can speak to a corpse and have his voice heard by the departed soul in the next life. In John’s Gospel (5.25), Jesus says, “the dead will hear the voice of the Son of God and those who hear will live.”

“The dead man sat up and began to speak.” Do you think people paid attention to his words? Of course! You, too, have an audience, a credibility. This is a great responsibility. I encourage you to pass all your deliberations through the filter of a formed conscience. 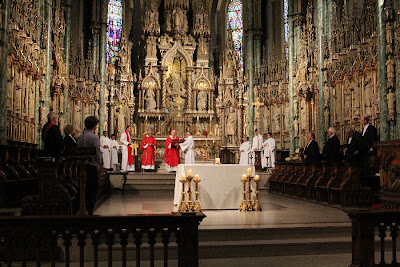 Our enactment of this 767-year-old ritual of the Red Mass connects us to the generations of jurists, functionaries and legislators who pursued their professions conscious that all humans need God. They sought divine grace and guidance, for consolation, for refreshment, and for hope. May these wonderful blessings of the Holy Spirit be yours today, through the intercession of Saint Thomas More and our Blessed Mother Mary. Amen.
Posted by Archbishop Terry at 6:41 AM