O God, who taught the Martyr Saint Wenceslaus to place the heavenly Kingdom before an earthly one, grant through his prayers that, denying ourselves, we may hold fast to you with all our heart. Through our Lord Jesus Christ, your Son, who lives and reigns with you in the unity of the Holy Spirit, one God, for ever and ever.


St. Wenceslaus, duke of Bohemia, was born about the year 907 at Prague, Bohemia (now the Czech Republic). His father was killed in battle when he was young, leaving the kingdom to be ruled by his pagan mother. Wenceslaus was educated by his grandmother, Ludmilla, also a saint. She taught him to be a Christian and to be a good king. She was killed by pagan nobles before she saw him king, but she left him with a deep committment to the Christian faith.

Throughout his life he preserved his virginity unblemished. As duke he was a father to his subjects, generous toward orphans, widows, and the poor. On his own shoulders he frequently carried wood to the houses of the needy. He often attended the funerals of the poor, ransomed captives, and visited those suffering in prison. He was filled with a deep reverence toward the clergy; with his own hands he sowed the wheat for making altar breads and pressed the grapes for the wine used in the Mass. During winter he would visit the churches barefoot through snow and ice, frequently leaving behind bloody footprints.

Wenceslaus was eighteen years old when he succeeded his father to the throne. Without regard for the opposition, he worked in close cooperation with the Church to convert his pagan country. He ended the persecution of Christians, built churches and brought back exiled priests. As king he gave an example of a devout life and of great Christian charity, with his people calling him "Good King" of Bohemia.

His brother Boleslaus, however, turned to paganism. One day he invited Wenceslaus to his house for a banquet. The next morning, on September 28, 929, as Wenceslaus was on the way to Mass, Boleslaus struck him down at the door of the church. Before he died, Wenceslaus forgave his brother and asked God's mercy for his soul. Although he was killed for political reasons, he is listed as a martyr since the dispute arose over his faith. This king, martyred at the age of twenty-two, is the national hero and patron of the Czech Republic. He is the first Slav to be canonized. 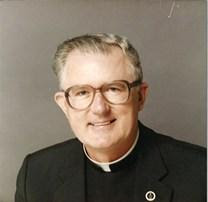 On August 2, when I spoke with Carl Matthews at the Jesuit Infirmary, I was struck by how physically diminished he had become; but he was, as always, cheerful and affirming of me and my ministry.

He also loved to write and so being publishing editor of the Catholic Register was a dream come true; he was disappointed when he lost his job over an overly effusive editorial he wrote that promoted federal constitutional change.  But he was loyal and took up with passion his subsequent ministry at Waubashene and Christian Island, which, because of proximity to the Martyrs Shrine, allowed him to celebrate and preach there and in a sense continue along the paths laid out by the Canadian Martyrs in service to rural folk and the Native People.  I am sure he would have found it fitting that it was on the feast of the Martyrs that Our Lord came to call him home to the Father's home.

There will be wake services at Manresa Retreal House Chapel on Sunday, September 30 from 2-4 PM and at Rosar-Morrison's on Sherbourne Street from 7-9 PM.

The funeral Mass will be celebrated at 10:30 AM on Monday morning, October 1 at Our Lady of Lourdes Church (Sherbourne and Earl Streets), with burial that afternoon in the Jesuit Cemetery, Guelph, ON. Here in a slightly edited form is the obituary provided by the Jesuits in English Canada Province:

Father Carl Joseph Damien Matthews died peacefully in Rouge Valley Hospital, Ajax-Pickering, Ontario on September 26th, the Feast of the Canadian Martyrs in his 81st year of life and the 62nd year of his life in the Society of Jesus.

After first vows and two years of classical studies in the juniorate, he studied philosophy at Regis College (the Jesuit Seminary), 403 Wellington Street, Toronto. He returned to Regiopolis for two years of teaching and then did special studies in education at the University of Toronto.

During his theological studies he was ordained a priest on June 4th, 1966. He returned to the University of Toronto for studies in education, which led to a long ministry in the field that included his being a consultant to the Catholic Education Association, a Trustee of the Catholic School Board and Chairman of the Toronto Catholic District School Board. During this time, he wrote several books on education in Ontario and did pastoral ministry at Martyrs’ Shrine, Good Shepherd Parish in Thornhill and St. Michael’s Cathedral.

After a brief tenure as editor and publisher of The Catholic Register, he began in 1994, a stint as pastor of St. John the Evangelist Church in Waubaushene and St. Francis Xavier Mission on Christian Island. During this time he also offered lectures at St. Augustine’s Seminary and did considerable writing and editing. In 2010 he became Chaplain at St. Joseph’s Motherhouse in Toronto.

Recently, when his health deteriorated, Fr. Carl moved to the La Storta Community in Pickering, and then to the Rene Goupil Infirmary; he was a dignified and gracious priest who cherished his clerical role and related warmly if somewhat formally with his companions. Very interested in politics, he enjoyed recounting a good story; he will be missed by his family, Jesuit companions and many associates.
Posted by Archbishop Terry at 6:06 AM