Memorial of St. Robert Bellarmine, Cardinal & Doctor of the Church - Cardinal Dolan and Stephen Colbert on Being Joyful Catholics 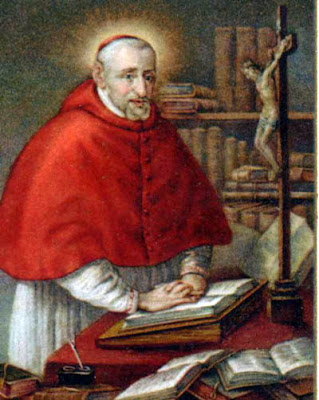 St. Robert Bellarmine, SJ, was one of the most important cardinals of the Catholic Reformation and became a Doctor of the Church.

Robert Bellarmine was born to an impoverished noble Italian family. His early intellectual accomplishments gave his father hope that Bellarmine would restore the family’s fortunes through a political career. His mother’s wish that he enter the Society of Jesus prevailed.

On completion of his studies, Bellarmine taught first at the University of Louvain in Belgium. In 1576 he accepted the invitation of Pope Gregory XIII (1572–1585) to teach polemical theology at the new Roman College.

Robert Bellarmine spent the next eleven years teaching and writing his monumental Disputations on the Controversies, a three-volume defense of the Catholic faith against the arguments of the Protestant reformers. A confidant to the popes, Bellarmine held a number of positions, including rector of the Roman College, examiner of bishops, Cardinal Inquisitor, archbishop of Capua, and bishop of Montepulciano.

Through his writings Bellarmine was involved in the political, religious, and social issues of the time. He argued with King James I of England and was a judge at the trial of Giordano Bruno. Bellarmine also communicated the decree of condemning the Copernican doctrine of the movements of the earth and sun, issued by Congregation of the Index to Galileo Galilei in 1616.

Although he was one of the most powerful men in Rome, Bellarmine lived an austere life. He gave most of his money to the poor. Once he gave the tapestries from his living quarters to the poor, saying that the walls wouldn’t catch cold. While he took little regard for his own comforts, he always saw to it that his servants and aides had everything they needed.

St. Robert Bellarmine was canonized by Pope Pius XI in 1930 and declared a Doctor of the Church in 1931 (www.Ignatianspirituality.com).

O God, who adorned the Bishop Saint Robert Bellarmine with wonderful learning and virtue to vindicate the faith of your Church, grant, through his intercession, that in the integrity of that same faith your people may always find joy. Through our Lord Jesus Christ, your Son, who lives and reigns with you in the unity of the Holy Spirit, one God, for ever and ever.

Excerpts from an article by Laurie Goldstein, who covers the religion beat for the New York Times:

The evening was billed as an opportunity to hear two Catholic celebrities discuss how joy and humor infuse their spiritual lives. They both delivered, with surprises and zingers that began the moment the two walked onstage. Mr. Colbert went to shake Cardinal Dolan’s hand, but the cardinal took Mr. Colbert’s hand and kissed it — a disarming role reversal for a big prelate with a big job and a big ring.

Cardinal Dolan was introduced as a man who might one day be elected pope, to which he said, “If I am elected pope, which is probably the greatest gag all evening, I’ll be Stephen III.”

The event would not have happened without its moderator, the Rev. James Martin, a Jesuit priest and prolific author who has made it his mission to remind Catholics that there is no contradiction between faithful and funny. His latest book is “Between Heaven and Mirth: Why Joy, Humor and Laughter Are at the Heart of the Spiritual Life.”

Father Martin said in an interview earlier this week that the idea came from two young theology professors at Fordham. The university’s president, the Rev. Joseph M. McShane, invited Cardinal Dolan to participate, and he readily accepted. Father Martin, who has made enough appearances on “The Colbert Report” on Comedy Central to earn the title “official chaplain,” invited Mr. Colbert....

Three thousand students and faculty members filled the Rose Hill Gymnasium, stomping on the bleachers, doing the wave and chanting “Ste-PHEN” like the revved-up audiences for Mr. Colbert’s studio show....

Mr. Colbert shed his character for the evening and offered several sincere insights into how he manages to remain a faithful Catholic while making fun of his own religion and most others.

He said he did not make jokes about the sacraments, or put a picture of the crucifixion on screen. But he said he liked to poke fun at the use and misuse of religion, especially in politics. “Then I’m not talking about Christ,” he said, “I’m talking about Christ as cudgel.”

Mr. Colbert is the youngest of 11 children, raised by Catholic parents who both attended Catholic colleges. His father and two of his brothers died in a plane crash when Mr. Colbert was 10. He said that after the funeral, in the limousine on the way home, one of his sisters made another sister laugh so hard that she fell on the floor. At that moment, Mr. Colbert said he resolved that he wanted to be able to make someone laugh that hard.

He is raising his children as Catholics, and he teaches Sunday school at his parish in New Jersey. “The real reason I remain a Catholic is what the church gives me, which is love,” he said.

Cardinal Dolan introduced Mr. Colbert’s wife, Evelyn, who was sitting in the audience, and brought her up to the stage. The cardinal put his arm around her and gave her a kiss on the cheek, and when Mr. Colbert feigned offense, the cardinal said, in a remark that brought down the house, “I can kiss your wife. You can’t kiss mine....”

The audience sent in questions by Twitter and e-mail, which Father Martin pitched to the two men. Among them: “I am considering the priesthood. Would it be prudent to avoid dating?”

Cardinal Dolan responded that, on the contrary, “it’s good” to date, partly to discern whether the celibate life of a priest is what you want. Then he added, “By the way, let me give you the phone numbers of my nieces.”

Mr. Colbert said, “It’s actually a great pickup line: I’m seriously considering the priesthood. You can change my mind....”
Posted by Archbishop Terry at 6:40 AM