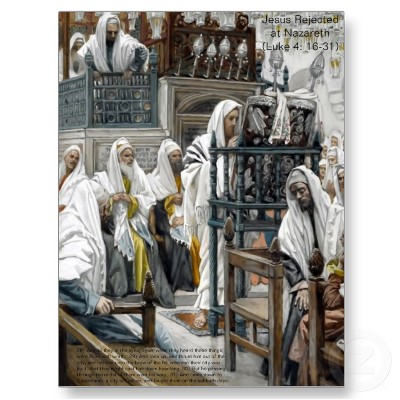 ﻿
“Familiarity breeds contempt” is another way of expressing the reason Jesus gave for people not accepting his mission, “a prophet is not without honour except among his own people”. A more developed version is found in the non-canonical Gospel of Thomas, “A prophet is not acceptable in his hometown; a doctor does not heal those who know him” (#31).

Greek literature had aphorisms paralleling Jesus' saying. Dio Chrysostom said, “It is the opinion of all philosophers that life is difficult in their native land” while Philostatus' Life of Apollonius of Tyana noted, “until now my own country ignores me”

Neither of these sayings contains the word “prophet”. The gospel proverb, then, takes up the Old Testament motif, found in today's first reading, of the rejected prophet (cf. Ezekiel 2.5; Jeremiah 35.15; Hosea 9.7; Daniel 9.6, 10).

God addressed Ezekiel as “mortal” to underline his frailty and to show that divine power becomes manifest in a prophet's words. Jesus chose the literal rendering “Son of Man”—underlying what is translated as “mortal”—to both conceal and reveal his prophetic mission from God.

People began to speak of Jesus as a prophet (cf. Mark 6.14-15; 8.28; 11.32), as they had of John the Baptist. While Jesus was not averse to this characterization, it would soon prove less than adequate to depict his identity, as he insistently preferred to refer to himself as the Son of Man (cf. 8.27-33).

In Mark's account, the extent of Jesus' rejection went beyond his hometown (as in most versions--cf. Luke 4.24; John 4.44) to his household (as in Matthew 13.57) and relatives (harkening back to Mark 3.20-21, 31-35). Each of these concentric circles was more restrictive. In the village culture, in the Nazareth of Jesus' time, to be set apart from one's family was to suffer a shame or dishonour reflecting on all its members.

In this episode of Jesus' visit home, the gospel reader learns that exposure to Jesus is no guarantee of faith. Earlier Mark showed that opposition to Jesus surfaced even among the chosen apostles—as one of the Twelve, Judas Iscariot, became His betrayer (Mark 3.19).

Exposure to Jesus and the gospel do not always issue in faith; paradoxically, exposure seems to inoculate some to faith, even as others are brought by their encounter with him to a full and lively faith.

Some interpreters read the situation with Jesus' own in a very restricted sense, considering only James, and possibly Jude, as having come to faith after Jesus' death and resurrection.

Luke, however, tells of a wider coming to faith, depicting “Mary the mother of Jesus, as well as his brothers” joining in prayer with the disciples prior to Pentecost (Acts 1.14). Likewise, the Fourth Gospel, while noting that Jesus' family did not believe in him during the time of his ministry (7.5), knew that the Mother of Jesus played a significant role in the community of believers after Jesus' death (19.25-27).

Mark refers to Jesus as “the son of Mary”. It was unusual for someone to be designated as the son only of his mother, something that has led some to interpret this as a charge that Jesus was illegitimate. Other Christians interpret this as a paradoxical allusion to his virginal conception, while others think it may indicate only that Joseph has died by this time, since other relatives are said to be present (“are not his sisters with us?”)

Some Christians interpret the term “brothers and sisters” as if these were blood brothers of Jesus and children of Mary. However, in the Semitic world—as today also in some African and Asian cultures—the terms brother and sister are used to refer to persons of common ancestry or relationship--what we might designate as close relatives such as cousins.

Catholic teaching regarding Mary's perpetual virginity has led some to interpret Jesus' brothers and sisters as referring to half-brothers of Jesus from an earlier marriage of Joseph, the foster-father of Jesus.

Stating that familiarity with a prophet begets dishonour, Jesus explained the offense his familiars took at him. Their amazement at his wisdom and powerful deeds led him, in turn, to marvel at their unbelief. The upshot was that those who rejected him could not experience God's saving power on their behalf. Indeed, miracles do not take place where faith is lacking. 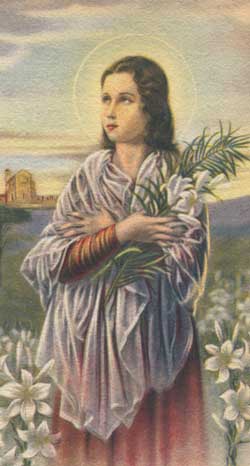 St. Maria Goretti was born of a poor family in Corinaldi, Italy, in 1890. Near Nettuno she spent a difficult childhood assisting her mother in domestic duties. She was of a pious nature and often at prayer. In 1902 she was stabbed to death, preferring to die rather than be raped. (Office of Readings)

"It is well known how this young girl had to face a bitter struggle with no way to defend herself. Without warning a vicious stranger (actually Alessandro Serenelli who lived with his father in the same house as the Goretti's.) burst upon her, bent on raping her and destroying her childlike purity. In that moment of crisis she could have spoken to her Redeemer in the words of that classic, The Imitation of Christ: "Though tested and plagued by a host of misfortunes, I have no fear so long as your grace is with me. It is my strength, stronger than any adversary; it helps me and gives me guidance." With splendid courage she surrendered herself to God and his grace and so gave her life to protect her virginity.

"The life of this simple girl—I shall concern myself only with highlights—we can see as worthy of heaven. Even today people can look upon it with admiration and respect. Parents can learn from her story how to raise their God-given children in virtue, courage and holiness; they can learn to train them in the Catholic faith so that, when put to the test, God's grace will support them and they will come through undefeated, unscathed and untarnished.

"From Maria's story carefree children and young people with their zest for life can learn not to be led astray by attractive pleasures which are not only ephemeral and empty but also sinful. Instead they can fix their sights on achieving Christian moral perfection, however difficult and hazardous that course may prove. With determination and God's help all of us can attain that goal by persistent effort and prayer.

"Not all of us are expected to die a martyr's death, but we are all called to the pursuit of Christian virtue. This demands strength of character though it may not match that of this innocent girl. Still, a constant, persistent and relentless effort is asked of us right up to the moment of our death. This may be conceived as a slow steady martyrdom which Christ urged upon us when he said: The kingdom of heaven is set upon and laid waste by violent forces.

"So let us all, with God's grace, strive to reach the goal that the example of the virgin martyr, Saint Maria Goretti, sets before us. Through her prayers to the Redeemer may all of us, each in his own way, joyfully try to follow the inspiring example of Maria Goretti who now enjoys eternal happiness in heaven." [Excerpted from a homily at the canonization of Saint Maria Goretti by Pope Pius XII]

O God, author of innocence and lover of chastity, who bestowed the grace of martyrdom on your handmaid, the Virgin Saint Maria Goretti, in her youth, grant, we pray, through her intercession, that, as you gave her a crown for her steadfastness, so we, too, may be firm in obeying your commandments. Through our Lord Jesus Christ, your Son, who lives and reigns with you in the unity of the Holy Spirit, one God, for ever and ever.

Posted by Archbishop Terry at 6:40 AM