OM: St. Peter Chrysologus, Bishop and Doctor of the Church 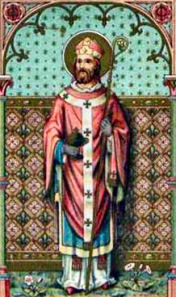 In the fifth century, Ravenna, not Rome, was the capital of the Roman Empire in the West, and Ravenna itself became a metropolitan see. St. Peter Chrysologus was one of the most distinguished archbishops of that see.

Peter was born in Imola about the year 400 and studied under Cornelius, bishop of that city, who ordained him deacon. In 433, the archbishop of Ravenna died, and when a successor had been chosen by the clergy and people of Ravenna, they asked Bishop Cornelius to obtain confirmation of their choice from Pope Sixtus III. On his trip to Rome, Cornelius took his deacon, Peter, as his companion; upon seeing Peter, the pope chose him for the see of Ravenna instead of the one selected by the clergy and people of Ravenna.

Peter was consecrated and was accepted somewhat grudgingly at first by both the clergy and the people. Peter, however, soon became the favourite of Emperor Valentinian III, who resided at Ravenna and was also highly regarded by Pope St. Leo the Great, the successor of Pope Sixtus.

There were still traces of paganism in Peter's diocese, and his first effort was to establish the Catholic faith everywhere, rooting out abuses and carrying on a campaign of preaching and special care of the poor. Many of his sermons still survive, and it is on the basis of these that he came to be known as "the golden word."

In his concern for the unity of the Church, Peter Chrysologus opposed the teaching of Eutyches, condemned in the East, who asked for his support. Peter also received St. Germanus of Auxerre to his diocese and officiated at his funeral.

Familiar is his dictum: "If you jest with the devil, you cannot rejoice with Christ." Some of his sermons are read in the Breviary. Ravenna, his episcopal city, still harbours treasures of ancient Christian liturgical art dating to his day.

Knowing that his own death was near, Peter returned to his own city of Imola and after urging great care in the choice of his successor he died at Imola about the year 450 and was buried in the church of St. Cassian. In 1729, Pope Benedict XIII declared him a Doctor of the Church. — [Reverend Clifford Stevens, The One Year Book of Saints]

O God, who made the Bishop Saint Peter Chrysologus an outstanding preacher of your incarnate Word, grant, through his intercession, that we may constantly ponder in our hearts the mysteries of your salvation and faithfully express them in what we do. Through our Lord Jesus Christ, your Son, who lives and reigns with you in the unity of the Holy Spirit, one God, for ever and ever.
Posted by Archbishop Terry at 7:12 AM