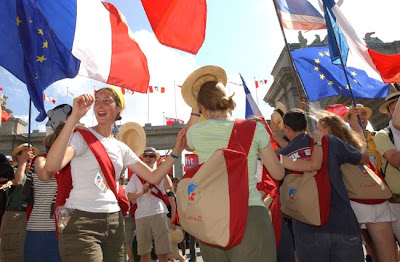 World Youth Day in Toronto was an historic moment in the life of the Church in Canada. With 320 young pilgrims I took the Ocean Limited train from Halifax to Toronto (27 hours: longer than the trip even to Auckland and Sydney in 2008!) We had a ball and the experiences of a life-time....

On the Pope's arrival, CNN had me commenting on the courage of the Holy Father as he insisted on walking down the steps of the plane to show his determination to give his all to those who had come. We reciprocated with our enthusiasm and affection.

Coming less than a year after 9/11, the WYD was fraught with turmoil and travail all of which contributed to diminishing the number who attended (the clergy sex abuse scandal in the USA, the pope's decision to go to Central America and Mexico immediately after Toronto, the garbage handlers strike until days before the start-up date).

Still, as St. Paul says, "We are afflicted in every way, but not crushed; perplexed but not driven to despair...always carrying in the body the death of Jesus, so that the life of Jesus may also be made visible..." (2 Corinthians 4.7-8)

So, ten years on, I wish happy memories to all who attended and to those who continue to give thanks to God for the graces of this event in our country and church's life, graces that continue to flow from it to strengthen our church to this day!

Thanks to the WYD CEO, Fr. Thomas Rosica, CSB and all his team, who are still doing great things, now at Salt and Light TV!
Posted by Archbishop Terry at 1:57 AM