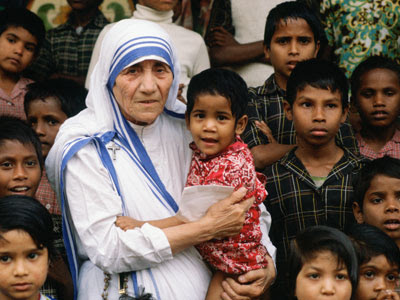 Today, September 5 is Blessed Mother Teresa of Calcutta’s Feast Day, the day she died in 1997.

The tiny woman recognized throughout the world for her work among the poorest of the poor was beatified October 19, 2003. Among those present were hundreds of Missionaries of Charity, the Order she founded in 1950 as a diocesan religious community. Today the congregation also includes contemplative sisters and brothers and an order of priests.

Born to Albanian parents in what is now Skopje, Macedonia (then part of the Ottoman Empire), was the youngest of the three children who survived. For a time, the family lived comfortably, and her father's construction business thrived. But life changed overnight following his unexpected death.

During her years in public school Agnes participated in a Catholic sodality and showed a strong interest in the foreign missions. At age 18 she entered the Loreto Sisters of Dublin. It was 1928 when she said goodbye to her mother for the final time and made her way to a new land and a new life. The following year she was sent to the Loreto novitiate in Darjeeling, India. There she chose the name Teresa [in honour of St. Therese of Lisieux] and prepared for a life of service. She was assigned to a high school for girls in Calcutta, where she taught history and geography to the daughters of the wealthy. But she could not escape the realities around her—the poverty, the suffering, the overwhelming numbers of destitute people.

In 1946, while riding a train to Darjeeling to make a retreat, Sister Teresa heard what she later explained as “a call within a call. The message was clear. I was to leave the convent and help the poor while living among them.” She also heard a call to give up her life with the Sisters of Loreto and, instead, to “follow Christ into the slums to serve him among the poorest of the poor.”

After receiving permission to leave Loreto, establish a new religious community and undertake her new work, she took a nursing course for several months. She returned to Calcutta, where she lived in the slums and opened a school for poor children. Dressed in a white sari and sandals (the ordinary dress of an Indian woman) she soon began getting to know her neighbours—especially the poor and sick—and getting to know their needs through visits.

The work was exhausting, but she was not alone for long. Volunteers who came to join her in the work, some of them former students, became the core of the Missionaries of Charity. Other helped by donating food, clothing, supplies, the use of buildings. In 1952 the city of Calcutta gave Mother Teresa a former hostel, which became a home for the dying and the destitute. As the Order expanded, services were also offered to orphans, abandoned children, alcoholics, the aging and street people.

For the next four decades Mother Teresa worked tirelessly on behalf of the poor. Her love knew no bounds; nor did her energy, as she crisscrossed the globe pleading for support and inviting others to see the face of Jesus in the poorest of the poor. In 1979 she was awarded the Nobel Peace Prize.

Mother Teresa's beatification, just over six years after her death, was part of an expedited process put into effect by Pope John Paul II. Like so many others around the world, he found her love for the Eucharist, for prayer and for the poor a model for all to emulate.

Speaking in a strained, weary voice at the beatification Mass, Pope John Paul II declared her blessed, prompting waves of applause before the 300,000 pilgrims in St. Peter's Square. In his homily, read by an aide for the aging pope, the Holy Father called Mother Teresa “one of the most relevant personalities of our age” and “an icon of the Good Samaritan.” Her life, he said, was “a bold proclamation of the gospel.” (www.americancatholic.org/saintoftheday)


* * *
Collect of Blessed Mother Teresa of Calcutta
O God, who called blessed Teresa, virgin, to respond to the love of your Son thirsting on the cross with outstanding charity to the poorest of the poor, grant us, we beseech you, by her intercession, to minister to Christ in his suffering brothers. Through our Lord Jesus Christ your Son who lives and reigns with you and the Holy Spirit, one God, for ever and ever. Amen

From the last letter of Mother Teresa, M.C.
to the Missionary of Charity Sisters, dated 5th September 1997.
My dearest Children, This brings you Mother’s love, prayer and blessing that each one of you may be only all for Jesus through Mary. I know that Mother says often–“Be only all for Jesus through Mary”–but that is because that is all Mother wants for you, all Mother wants from you.

We have much to thank God for, especially that He has given us Our Lady’s spirit to be the spirit of our Society. Loving Trust and Total Surrender made Our Lady say “Yes” to the message of the angel, and Cheerfulness made her to run in haste to serve her cousin Elizabeth.

That is so much our life—saying “Yes” to Jesus and running in haste to serve Him in the poorest of the poor. Let us keep close to Our Lady and she will make that same spirit grow in each one of us. September 10th [Inspiration Day] is coming very close. That is another beautiful chance for us to stand near Our Lady, to listen to the Thirst of Jesus and to answer with our whole heart. It is only with Our Lady that we can hear Jesus cry, “I Thirst”, and it is only with Our Lady that we can thank God properly for giving this great gift to our Society.

Last year was the Golden Jubilee of Inspiration Day, and I hope that the whole year has been one of thanksgiving. We will never come to the end of the gift that came to Mother for the Society on that day, and so we must never stop thanking for it. Let our gratitude be our strong resolution to quench the Thirst of Jesus by lives of real charity–love for Jesus in prayer, love for Jesus in our Sisters, love for Jesus in the poorest of the poor–nothing else. And now I have heard that Jesus is giving us one more gift.

This year, one hundred years after she went home to Jesus, Holy Father is declaring Little Flower to be a Doctor of the Church. Can you imagine–for doing little things with great love the Church is making her a Doctor, like St. Augustine and the big St. Teresa! It is just like Jesus said in the Gospel to the one who was seated in the lowest place, “Friend, come up higher.” So let us keep very small and follow Little Flower’s way of trust and love and joy, and we will fulfil Mother’s promise to give saints to mother Church. 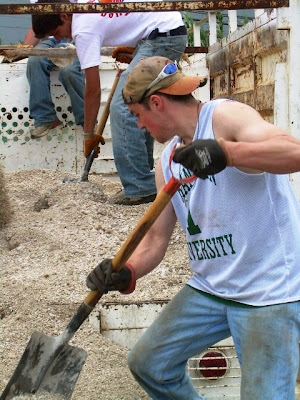 THROUGH WORK man must earn his daily bread and contribute to the continual advance of science and technology and, above all, to elevating unceasingly the cultural and moral level of the society within which he lives in community with those who belong to the same family.

And work means any activity by man, whether manual or intellectual, whatever its nature or circumstances; it means any human activity that can and must be recognized as work, in the midst of all the many activities of which man is capable and to which he is predisposed by his very nature, by virtue of humanity itself.

Man is made to be in the visible universe an image and likeness of God himself, and he is placed in it in order to subdue the earth. From the beginning therefore he is called to work. Work is one of the characteristics that distinguish man from the rest of creatures, whose activity for sustaining their lives cannot be called work.

Only man is capable of work, and only man works, at the same time by work occupying his existence on earth. Thus work bears a particular mark of man and of humanity, the mark of a person operating within a community of persons. And this mark decides its interior characteristics; in a sense it constitutes its very nature.
Posted by Archbishop Terry at 7:11 AM